DIVINE MERCY, REPENTANCE, FORGIVENESS, AND RECONCILIATION FOR THE MOST GRIEVOUS OF MORTAL SINS AND CRIMES? DO WE LET SECULARISTS DICTATE WHAT THE CHURCH SHOULD DO? 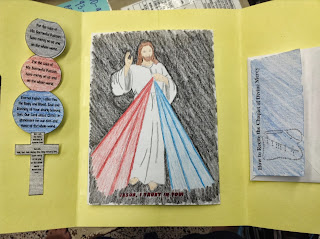 Pope Francis has been calling the Church to show forth the Divine Mercy of Jesus Christ who died for us poor miserable sinners.

We think like secularist and exercise their values when we present ourselves a false dilemma based on the vain sense of charity that comes from believing one has subjugated God. If the reports of Priebke's intransigence are true, then he passed his own judgment, we have nothing but our own hubris to lead us to think otherwise. We are withholding nothing that he deserves or valued. As far as human powers go, he is forgiven; what happens beyond is not our call.

The same goes for the abusive priests and their facilitator bishops. We are on a razor's edge and are chartered to find justice as Christ would have it with these people. This would be neither to reprieve ourselves of the responsibility to act against our most loved and treasured shepherds, nor to display them in public wearing their own intestines as a necklace. It is clearly something in the middle limited by by the fullness of our humanity.

In both examples of this post we see humans trying to not so much act as God would like, but trying to get God to act as we would like. We take Him at His word when He says everything can be forgiven. We, therefore, feel permitted to do anything that comes to mind believing that we can waive our Get Out of Hell Free card in His face demanding forgiveness. My theological betters can correct me, but I think there is one unforgivable Sin and that is the offense of the Holy Spirit.

We are 'only' not giving an unrepentant murder a Requiem Mass and burial. We are 'only' removing clergy from positions that they used to break laws of both God and man, injuring the souls of those they should have defended. There is a simple logic in what they both did: they did not care for their relationship with God or the Church. So we are taking nothing from them that they value.

As bad and disgusting as the molestation scandal and cover-up are, it is being used as a huge distraction. The enemies of the Church use it as a weapon because it is a particularly effective emotional trigger which also activates people's voyeuristic and scandal hungry mentality. Devout, believing Catholics are captured by it for the emotional reasons, but also because they have been successfully manipulated by the media and the Church's enemies.
All of this distracts us from other things...such as the de-construction of the Liturgy, the diluting of Catholic identity, and the increasing secularization of the Church.
So, which is worse, sexual crimes (for which there is atonement and forgiveness within the traditional structure and doctrine of the Church), or the teaching and promoting of heresy, which strikes at the soul and robs the Church of that structure and doctrine which guarantees forgiveness to the truly repentant and salvation to those who earnestly seek Him? The darkest evil is far more subtle than a scandal which grabs headlines and feeds salacious and voyeuristic popular response.

Even if we are not "mandated reporters," we have an obligation to go to the authorities, civil and ecclesiastical.

I asked a lawyer, way back in the late 80's, about this. "Father, if someone came to you outside confession and admitted to robbing a bank, you would then have knowledge of a crime and could be liable to prosecution if you did not report it. The same goes for any form of sexual abuse" he told me.

"Today with 20/20 hindsight and new civil and canonical laws, we know that what was done all the way up to the late 80's and even into the early 2000's was wrong morally"

Why, in the name of all that is holy in centuries-old Catholic moral doctrine, should hindsight be required to see the sin involved? How could priests and bishops have committed these grievous sins without realizing the need for confession before their next morning Mass?

I recall writing my bishop after the 2001 USCCB meeting in Dallas that was devoted to this, asking why all the discussion among the bishops was about PR and legal protection (of themselves), with no mention whatsoever in hours of televised discussion of their sin and need for repentance.

PS. These are not merely rhetorical questions. To this day, I simply do not understand how clerics (especially) could have committed such sins without prior consideration and subsequent remorse. To have done so mocks their pretended sincerity in the practice of the faith.

The use of the Sacrament of Penance and therapy were employed because it was a mortal sin. Was it always a crime or treated as a crime in the 1950,s through the 70,s? As I recall in the south PI, an adult man having sex with a teenage grill and what seem to be consensual was not criminal. When I worked at the Dairy Queen in the late 60's one of my coworkers in her 40's at the time was married at 13 legally with parental consent to a man well into his 20's.

I think most of the argument regarding Priebke's funeral stems from the modernist idea (which I have often commented upon and over which I have crossed swords with Pater Ignotus, although my sword is markedly sharper than his) that a Catholic funeral is somehow an endorsement of the life of the deceased. He was a baptized Catholic and not excommunicated and so is entitled to a Requiem Mass, which presumes nothing but prays for his soul and the souls of all the faithful departed. By the way, anti-fascists (which often meant Communists) committed equal if not worse atrocities.

"...I REPORT, YOU DECIDE..."
I long ago (2001, before the full weight hit the fan, and even more so later) "decided" that rcg, PI, and Henry have it right. I understand fully the truth of what Gene says, but it is a separate issue of apples-and-oranges sin, a fallout as it were.
But whether we "decide" and choose is actually irrelevant in a larger, more eternal sense: our Church is suffering the consequences of the sin of a few--it is a hard but strong lesson in the nature of sin and consequences. Those in ecclesial fraternity and/or authority who indulged in cover-up did and do aid and abet and thus multiply the consequences to the Church.
Father, regarding your last comment, Consider for a moment the sin of abortion back when it was illegal vs now legal. In 1965, it was a reportable civil crime; now it is not so--does that remove consequences? A pregnant female chooses abortion: any family/friends who assist her become complicit in breaking God's law regardless of changes in civil law. Cover-up doesn't ameliorate. A helpless, innocent child is dead. Even if the individuals repent, consequences remain and often multiply (just ask any abortive female and her family!). "But I repented, so it's not fair I have to suffer consequences!" How do we respond...?

John Nolan, I find your logic appealing, certainly because we are all sinners and likely to die with some considerable 'baggage' to reconcile. The key word you used is "Faithful" departed. It seems that Priebke is clearly not faithful.

rcg: We are not qualified to judge whether or not someone is repentant. Even suicides are given the benefit of the doubt. One of the saintliest men I have ever met was the late Group Captain Leonard Cheshire VC, yet tens of thousands of innocent men, women and children were killed by the Allied saturation bombing of Germany in the Second World War. Cheshire also flew as an observer when the USAAF dropped the atomic bomb on Hiroshima.

Most of us were not, nor are likely to be, in the position that Priebke was in. Let God judge him; the rest of us can pray for his soul and reflect that in similar circumstances we might not have acted blamelessly.

Minimum marriage age varies from state to state. So does the prohibition against marrying cousins or varying degrees of consanguinity.

Currently in Georgia an 18 year old is free to marry. 16 and 17 year olds may marry if both parents/legal guardians approve.

I would be surprised if it was ever legal to have a sexual relationship with a 13 year old, but an historian of the Georgia Code will be able to enlighten us.

But, again, even in the absence of a law making clergy Mandated Reporters, there is a moral obligation to report crimes.

Currently in GA, sexual intercourse with anyone under the age of 16 is considered statutory rape. Neither the gender nor the "willingness" of the minor affects the law. The ages of those involved do impact the criminal "level" of the act - felony, misdemeanor, etc.

I presume that none of you have seen Ed Peters' posts about Priebke. Seems that he is not entitled to a Catholic funeral and neither should he receive one, since it appears that he did not repent of his (mortal) sins.

Ed Peters: "I see nothing to debate here. Convicted multi-murderer Erich Priebke meets the definition of “manifest sinner”, he offered no “sign of repentance” before his death (indeed, he seems to have offered quite the opposite), so he must be denied ecclesiastical funeral rites per Canon 1184.

Of course, that won’t stop a lot of distracting commentary over whether Priebke “repented” before he died as if (a) that were relevant to Canon 1184 (it is not, read the canon) and even if it were relevant whether (b) such repentance could be divined by mortal men (it can’t, which is why the law does not address “repentance” it addresses “signs of repentance.”)

One might debate the law itself, of course, but about how the law is to be interpreted, there is nothing to debate."

Oh My Gosh! Seems that the SSPX has stepped up to give Priebke a funeral.

Canon 1184 §1. "Unless they gave some signs of repentance before death, the following must be deprived of ecclesiastical funerals:
1 notorious apostates, heretics, and schismatics;
2 those who chose the cremation of their bodies for reasons contrary to Christian faith;
3 other manifest sinners who cannot be granted ecclesiastical funerals without public scandal of the faithful."

"§2. If any doubt occurs, the local ordinary is to be consulted, and his judgment must be followed.

"Canon 1185. Any funeral Mass must also be denied a person who is excluded from ecclesiastical funerals."

Of course there is the application of prudential judgement involved in deciding these matters, taking into consideration specific circumstances.

There have been members of the mafia denied Catholic funerals, for instance.


John Nolan: You mentioned Hiroshima. Here is a good article on the Atomic bombing of Nagasaki:


The Catholic Holocaust of Nagasaki—“Why, Lord?”


"The epicenter of the blast was the Urakami district, the heart and soul of Catholicism in Japan since the sixteenth century."

Pater: You touch on another issue.
Abortions have been performed on girls under 16 and there is no follow by authorities to get the person responsible for the pregnancy.

Ironically Kyoto was removed from the atomic target list because of its religious associations (Buddhist and Shinto) which led to Nagasaki being 'promoted'. Even so, were it not for cloud cover over Kohura, Nagasaki would have been spared (it had already been heavily bombed).

Are we fixin' to waller in WW II guilt again? Let's not...had they not bombed Pearl, no Japanese cities would have been bombed. They dealt it...too bad.

No WW II guilt. In fact the above referenced article gives a possible providential reason (albeit not agreeable to everyone) why Nagasaki ended up being the city bombed.
You have to read the article.

Thanks, George. I'll read it.