IT'S GOOD TO BE KING, I MEAN, A PRIEST IN ROMA! BUT I AM NO OLDER BROTHER TO THE PRODIGAL SON! 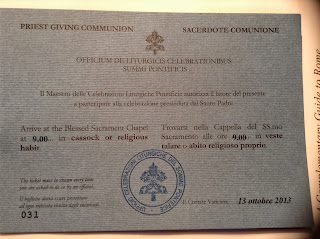 These are historic days for the Church of Roma! What a privilege to be living next to the Vatican, actually on Vatican terroritory, and have two popes as next door neighbors, and good popes and neighbors they are!

Another privilede that I will have with many other priests on Sunday is that I will be able to distribute Holy Communion at Pope Francis' outdoor Mass in Saint Peter's Piazza for the "Consecration of the World to Our Lady of Fatima!" The statue from Portugal is here. This afternoon at 5PM Roma time, she will be processed into St. Peter's Piazza with great fanfare fitting for our Queen of Heaven. Rumor has it that Pope Emeritus Benedict will be present to offer veneration, but I don't know how trustworthy this news is, but it is circulating around here.

Then tomorrow which is suppose to be mostly sunny with a high of 75, will be the glorious open air Mass. I don't know if Pope Benedict will concelebrate, but wouldn't that be cool!

The priests of our Continuing education program here at the NAC have tickets to distribute Holy Communion to the Faithful at Mass and I have my ticket now! A photo of it is above
We are to wear our cassocks to the Mass and enter through a special side gate and go to the Blessed Sacrament Chapel to receive our surplice and stole and instructions. I hear that the priests wearing cassaocks are given Hosts from the tabernacle consecrated at a previoius Mass and we begin processing into the Piazza during the Agnus Dei.

We are told to distribute Holy Communion only on the tongue, not in the hand. But few seem to follow this instruction if you watch what happens at these outdoor Masses. Distributing Holy Communion to so many who are forcing their way to the one distributing is, well, down right chaotic and somewhat irreverent.

But this enigma of a Pope, who is very conservative when it comes to Marian devotions and recognized private revelations of her throughout the world, is also being considered a throw-back to the 1970's by paranoid older brothers and sisters of the Prodigal son.

John Allen that great and insightful reporter for that awful newspaper, The National Chismatic Reporter (NCR), had some great comments on his Friday column. The following are some quotes:

Yet that's basically today's situation, as Francis continues to garner acclaim and admiration from almost every , most recently for a moving Oct. 4 visit to Assisi and for confirming his desire to reach out to divorced and remarried Catholics by announcing a Synod of Bishops in October 2014 dedicated to the family and marriage.

The "almost" in that sentence, however, is important because while Francis remains a smash hit overall, he's also got a budding "older son" problem.

The reference is to the parable of the prodigal son, a template many observers are now applying to Catholic reaction to the new pope. Over his first eight months, Francis basically has killed the fatted calf for the prodigal sons and daughters of the post-modern world, reaching out to gays, women, nonbelievers, and virtually every other constituency inside and outside the church that has felt alienated.

There are an awful lot of such prodigals, of course, which helps explain the pope's massive appeal.

One can spot at least three such groups:

Some Vatican personnel who have tried to do their best over the years in service to the successor of Peter and who may feel a bit demoralized hearing the pope describe their work environment as infested with careerism, "Vatican-centrism," and the "leprosy" of a royal court.

Some pro-life Catholics who feel like they've carried water for the church on controversial and sometimes unpopular issues such as abortion and gay marriage and who now get the sense the pope regards some of their efforts as misplaced or over the top.

Some evangelical Catholics, both clergy and laity, who've tried to reassert a strong sense of Catholic identity against forces they believe want to play it down, who now feel the pope may be pulling the rug out from under them.

For the moment, whether those perceptions are justified, and to what extent, isn't really the point. They're out there, and people with their ear to the ground in these circles seem worried about it.

On Tuesday, renowned Italian Catholic writer Vittorio Messori published a front-page essay in Corriere della Sera, Italy's paper of record, acknowledging the "nostalgia" some people in his circles are feeling for Pope Benedict XVI. He reminds them that for believers, loyalty to the pope, whoever he is, "is based on something very different from personal sympathy."

Messori first came to prominence as the author of The Ratzinger Report, a blockbuster interview with the Vatican's then-doctrinal czar, and also produced Crossing the Threshold of Hope with Pope John Paul II in 1994. That history gives him strong credibility, especially in more conservative Catholic circles.

Indirectly, Messori's message seemed to be: You may not like it, but Francis is the pope, so get in line.

MY FINAL COMMENT: AS everyone who reads my blog knows, I am a papist. I personally liked Pope Benedict's style of bng pope and his measured ways of addressing the Faithful better than what Pope Francis has shown, but this is superficial. And if one's Catholicism and loyalty to the Holy Father is built upon the superficial, what does that say of our Catholic Faith?

I had hoped that Pope Benedict would have named the heresies that are recurring in the Church today. But it has been Pope Francis who has been calling out the heretics but in a gentle way to bring them home like the Prodigal son, but the son had to recognized his sin and return, but the father was waiting as does God the Father with us. The current Holy Father is modeling this for us too and making us who are like the elder son feel like, well, the elder son!

If this Holy Father is able to bring Italy and the rest of Europe back to the practice of the Catholic Faith and to make the Church relevant once again in this very secular culture, then more power to him and the Holy Spirit. Idn't want to get in the way of the Holy Father's leadership as the Supreme Pontiff.

I hope you will get behind this Holy Father too even if the humility that God will give you to get over your sin of pride kills you!
Posted by Fr. Allan J. McDonald at Saturday, October 12, 2013

Two good things here that contrast with what we often see on a local parish level:

1. Requiring secular priests to wear the cassock (Fr. McDonald, I presume you must have somehow known to bring yours on this trip and, probably, a lot of priests may have had to purchase or borrow one for such events while in Rome as many no longer see fit to own one).

For those of you who don't believe me on this one, I can tell you that when my now 15 year old daughter went for her First Holy Communion, we had her dressed in the customary white dress and veil and with traditional white gloves. She happily and proudly wore this ensemble and was prepared to receive Communion on the tongue. When we got to the church the unhabited nun Director of Religious Education told me that she could not wear the gloves and that SHE wanted them all to receive on the hand. This was about eight years ago in the Diocese of Savannah, Ga.

My daughter now insists on receiving on tongue and also kneels despite the fact that our pastor has denied us the kneelers that our previous pastor had graciously allowed. This is but one example of what I mean when I assert that the liturgical "reforms" have, for too long, been skewed in one direction at the diocesan and parish level.

I can't wait to see the Mass of Consecration. Will Pope Benedict concelbrate (or is it co-preside)?

Will Francis mention Russia by name? (this will surely be the last chance for a "proper" consecration, as these things seem to happen only once every 30 years)

Are all the bishops of the world being ordered by the Vatican to participate (a mandatory requirement for a "proper" consecration), even if its via their own diocese in the middle of the night, local time?

Even if the consecration isn't perfect (ie, no mention of Russia by name, not all the world's bishops participating, which is what I am expecting), there will still be some imperfect benefits and imperfect peace.

The first imperfect consecration by Pius XII in the 1940s brought about the end of WWII.

The second imperfect consecration by JPII in the 1980s brought about the giant setback for communism and the break up of the USSR.

This imperfect consecration by Francis may bring about, dare I say it, the self-destruction and elimination of radical Islam.

I am sorry to hear your story, but it is on oft-repeated scenario!!