THE ANTIPATHY THAT TRADITIONAL CATHOLICS HAVE TOWARD POPE FRANCIS IS MISPLACED! 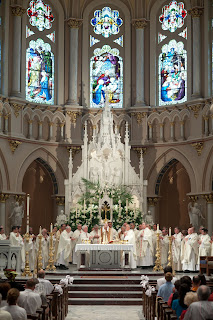 Usually it is or was progressive Catholics who have been whining about the pope ever since Pope John Paul II was elected. They didn't like this, that or the other about the popes, especially poor, old Pope Benedict!

Now we see how much in common traditional Catholics have with their perverted sided, the progressives. They now are the ones whining about poor, old Pope Francis when in fact they have nothing really to whine about.

This pope calls it like it is. He constantly refers to himself, other cardinals, bishops and priests, not to mention the laity at sinners! How many have heard homilies in their local churches on sin and the need to go to confession frequently? How can we appreciate Jesus Christ and the salvation He himself has earned for us and given to us as a pure gift, if we don't understand our miserable state prior to this gift? And that without His Sacrifice on the Cross and glorious resurrection we would burn in hell for eternity. If that doesn't make you grateful, then what will?

But even after the Cross and Resurrection, we remain sinners even after baptism, thus the need to continually seek the renewal ofGod's forgiveness in Confession, the Sacrament of Penance or Reconciliation. This pope has made that very abundantly clear. Get it?

But on top of that, this pope is also speaking about heresies in the Church and heretics. In a way it is a throw back to the mean old Church of pre-Vatican II times when anathemas were hurled at heretics, but Pope Francis does it in a gentle way.

Just yesterday at his Wednesday general audience, with almost 100,000 there again, the pope spoke of heresy! This is what he said:

"The Church is not without sin because it is made up of sinners. Priests, sisters, bishops, cardinals and even Popes are sinners. Pope Francis warned us not to believe the misconception that the Church is filled only with the “pure” and that all others are to be “removed”. “This is not true!” he exclaimed. “This is heresy!”

The pope of course has spoken several times about the heresies of Gnosticism and Pelagianism. You'd think traditional Catholics would be grateful for this, but no, they whine, whine, whine!

The pope also calls for fidelity to the Magisterium of the Church, the pope and bishops in union with him. He has called the Council of 8 Cardinals to advise him, but make no mistake, this authoritarian pope, as he self-describes himself as a past reality, but we know that it isn't just a past reality, is going to make the final decisions and decrees. You'd think traditional Catholics would be dancing in the streets over the authority this pope throws around. But, no!

The pope says that he is humble enough to carry out his agenda. Well, of course we know that he is far from humble and a push over, simply because a person who says they are humble isn't!

So while Pope Benedict clothed himself in the majesty of the papacy, he was truly humble as a person, which his resignation is the apex sign of this humility. Whereas the Pope Francis who doesn't use any of the trappings of majestic monarchy as it concerns the papacy, is in reality wearing it without doing so by his actions and egoism. But this will ultimately benefit the Church by bringing the progressives back to some semblance of reason and orthodoxy. Just remember, those who complain the most about this, that, or the other, like the pope complaining that the trappings of the court is the leprosy of the papacy, are the ones most inclined to buy into and actually do what they complain about the most!

Oh, and did I forget to mention that Pope Francis has approved a very, very traditional model for the Anglican Ordinariate Mass which includes in the appendix of their version of the Roman Missal the options of the Prayers at the Foot of the Altar, the traditional Offertory Prayers and the Last Gospel, not to mention rubrics that are more in line with the Extraordinary Form of the Mass? You'd think traditionalists would be rocketing into space over their joy on this one, but no, they remain with faces that look like pickled peppers.

And now, because of this pope, the agnostic President Barack Obama is taking a look at what this pope is saying, which may well be the first stirrings of the "inquiry" phase of the RCIA for him. If this isn't the new evangelization, I don't know what is. Shouldn't we be praying for President Obama's conversion which only the Holy Spirit can bring about and shouldn't we welcome that sinner, and the president like all of us are, into the fold of Holy Mother Church, where God will make him holy? Why would traditional Catholics be opposed to the Holy Spirit converting Barack Obama on his pilgrimage or walk toward the light?

It's enough to make this recovering progressive rethink his conversion.

I believe "antipathy" is too strong a word. Other reactions to some of the Pope's statements come to mind...concern, distrust, suspicion, disappointment, frustration, anxiety, incredulity, consternation, apprehension, doubt...all accompanied by such reactions as head shaking, head scratching, eye popping, hand wringing, double-taking, vomiting, nausea, hives, tachycardia, dyspepsia, insomnia, running in small circles, raking one's nails down a blackboard, and slapping oneself up-side-the head and saying, "WHUT!!!!" Or, for those of us who are surprised by nothing, laughter and another shot of single malt...

I would not be so quick to judge all traditionals. Bare in mind due to circumstances beyond our control, the term still more often than not consider all post conciliar Popes Heretics and excommunicated anti-Popes thus making railing against Pope Francis easy and convenient.

No, there are a lot of us traditional Catholics who are as infectiously in love with him as the progressive to our left, though I might argue we might understand him more clearly.

Father McDonald, irrespective of the truth of your headline, I see little correlation with the content of the post itself. You devote 8 or 10 paragraphs to enumeration of Pope Francis' adherence to standard Catholic beliefs. What less would anyone expect of any pope, whether he be liberal or conservative in stance?

In particular, none of these bear on any distinction between "traditional Catholics" and any other faithfully believing Catholics (since they are things that all real Catholics agree on). In the sense that you yourself seem such to make a distinction, assuming implicitly that traditionalists are somehow set apart from other faithful Catholics.

Pope Francis : “Proselytism is solemn nonsense, it makes no sense. We need to get to know each other, listen to each other and improve our knowledge of the world around us. Sometimes after a meeting I want to arrange another one because new ideas are born and I discover new needs. This is important: to get to know people, listen, expand the circle of ideas. The world is crisscrossed by roads that come closer together and move apart, but the important thing is that they lead towards the Good.”

Pope Benedict : The Church does not engage in proselytism. Instead, she grows by “attraction“-just as Christ “draws all to himself” by the power of his love, culminating in the sacrifice of the Cross, so the Church fulfills her mission to the extent that, in union with Christ, she accomplishes every one of her works in spiritual and practical imitation of the love of her Lord.

The sky is not falling.

Finally someone has said what I've been wishing would be said. Thank you, Father.

I happen to agree about proselytism. That is not the issue.

Truly so. Be not afraid! The traditionalists are not coming to get you.

I think you are naive if you think Obama is about to enroll in RCIA. Like others inside and outside of the Church who hate her moral teachings, he is just going to use the Pope's loose statements to hammer the Church about thise teachings. The Pope may think he's trying to win hearts to Christ, but he's just providing dissenters with ammo. Very naive.

Pure worship is a fire that unites us to God. Everything else is just commentary.

The "Antipathy" is well placed.