Yes, a real bombshell in the liturgical sense in terms of ad orientem! Pope Francis today, Thursday, October 31 had his daily Mass in St. Peter's Basilica at the side chapel altar where Blessed Pope John Paul II is entombed. Pope Francis celebrated the Liturgy of the Eucharist ad orientem for the first time, publicly, as pope.

While it is obvious that the Holy Father prefers facing the congregation, although is style of celebrating Mass is in an "ad orientem sort of way" including maintaining all these months the Benedictine Altar arrangement, he is not opposed to the Ordinary Form of the Mass being celebrated ad orientem just as Pope Benedict did on certain occasions. This is bombshell good news indeed!

Keep in mind that it was this pope, Pope Francis that approved the new Anglican Use Mass that clearly allows for ad orientem, kneeling for Holy Communion and the Prayers at the Foot of the Altar, the EF's Offertory Prayers, the EF's rubrics for the Roman Canon and the Last Gospel.

He distributes to this day, Holy Communion by way of intinction to the deacons of his Masses who kneel before him. 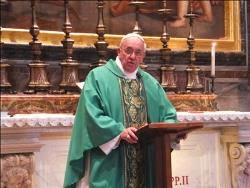 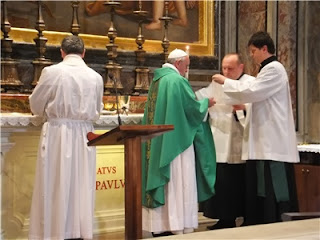 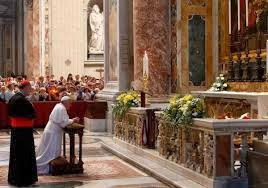 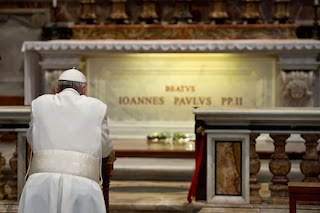 PRESS HERE FOR A YOUTUBE PRESENTATION OF THIS MASS BY VATICAN RADIO
Posted by Fr. Allan J. McDonald at Thursday, October 31, 2013

But so what? How else would he celebrate Mass in a chapel lacking an abyssinian table? Bird entrails, anyone?

Seriously, doesn't this daily attempt at divination by trivia risk trivialization of faith?

Henry, this is very important and not a trivialization. The Holy Father could have easily required a portable altar to be placed in front of the actual altar, but he did not.

That speaks volumes and tells us that this is an option for the Ordinary Form of the Mass now modeled, but certainly not mandated by both Pope Benedict and now Pope Francis!

Thought I'd let you know.

Thanks Fr. G, I don't know why Pope John XXIII came to me instead of Blessed John Paul II, but clearly you are correct and I have corrected the post..

More confusion. The only consistent thing about this pope is his inconsistency.

The only time I'm aware Benedict XVI did this was on the Feast of the Lord's Baptism, in the Sistine Chapel - publicly, at least. Like John Paul II before him, he celebrated ad orientem daily in his private chapel, something Francis doesn't do.

At any rate, we all agreed at the time Benedict did this that it was a highly symbolic affirmation of ad orientem worship. I think the same is the case here. While Francis obviously prefers ad populum celebration, I believe - or I'm hoping - he's telling both priests and people here that "Turning Toward the Lord" is an acceptable, mainstream option. It might be his idea, but I'm guessing he was encouraged to do it. Even so, least it's happened.

I would dearly like to see photos of the consecration though.

Pope Benedict also did so in the Pauline chapel which can be done either way at the same altar. Pope Francis chose to face the congregation in this same chapel a few months back.

Who would need Pope Francis to tell him that ad orientem celebration "is an acceptable, mainstream option"? Has it not always been? (Aside from the usual reminder that it's assumed in the official Latin of the OF missal rubrics.)

What I was thinking in my original comment is that . . . To view any pope as "modeling" the celebration of the Mass--as though exhibiting the latest passing fad or fashion--is itself to trivialize the heavenly liturgy as we have received it.

For the pope, like any other priest, is not the master of the liturgy, but its servant. I recall a discussion between two students in Cardinal Newman's first novel, who are discussing the perogatives of the Roman Pontiff, whether or not he is all-powerful in the Church. One of them points out that even the pope, in celebrating Mass, does not do whatever he will, but obeys the instructions of his master of ceremonies.

Guys, we have got to relax. I have my doubts, but i see this Pope is up to something good, I think he has a vision. I would have preferred B-XVI to stick around and wipe out the Vatican staff, but that is just me. I think Pope Francis correctly sees the TLM as off putting to many people and is concerned that it would run off many who would otherwise benefit from a more gentle matriculation. I am for giving him time and room. It looks like he is headed in the right direction, just maybe not at the speed I would like. I get upset at the sloppy Liturgy in most parishes, but I know that I won't get much air time with the Catholics in those congregations if I belittle their views. I will admit, it is very difficult because I have scant respect for it. I have close family that are mired in that mess, but at least they are in Mass. I can't let my conceit get in the way. Pope Francis seems to be way ahead of me in that struggle.

However Pope Pius XII in Mediator Dei says the pope may change Holy Mass as he sees fit.

There are pictures of the Mass on the Mons. Guido Marini Facebook page:

This is wonderful! I hope he will celebrate it again at the Sistine Chapel for the feast of the Baptism of the Lord as Pope Benedict XVI did.