DECIPHERING THE POPE AND DIFFERENT LEVELS OF PAPAL TEACHINGS 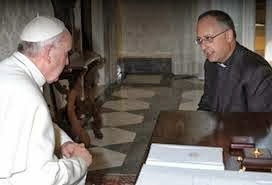 Pope Benedict XVI wrote several books on Jesus while he was pope. In each book he had a disclaimer that these writing were not on par with papal teachings and thus readers, especially academic readers could critique and disagree with what he wrote if what he wrote wasn't definitively taught by the Church.

Pope Francis loves to talk as any good Italian worth his or her salt does! The Italians love Pope Francis because, well, he is so Italian especially how he speaks Italian and frames his subjects. His Italian is spoken as Italians speak it and he inserts humor in what he says as we Italians love to do also.

I have decided not to try to interpret this pope's remarks which he makes off-the-cuff any longer. I simply refer you to what he says and remind you that off-the-cuff remarks, especially those that leave open a wide interpretation, must be interpreted in light of the Catechism of the Catholic Church and other official teachings of the Magisterium and not independent of these. There are no new revelations to be transmitted to the Church.

This pope has given three interviews thus far and each of them has caused controversy, glee, angst and other reactions. But let us be clear, off-the-cuff remarks made in an interview are not papal teachings. These, like the books Pope Benedict wrote, can be critiqued and one may well disagree with what is said.

The highest form of papal teachings are those which are written by the pope himself, not by others. These can be a homily, a papal exhortation or some other well-written eleoqution. The highest form of a papal teaching is an encylical. Pope Francis has written only one, the one on Faith which was a collaborative encylical with Pope Benedict. Catholics may not dissent from an encylical. We can dissent from a papal interview and his off-the-cuff remarks, especially when those remarks are open to a variety of interpretations or misplace what is truly important to the Church and the preaching of the Gospel, especially the crisis facing culture today and the crisis of the Church too.

What is clear about Pope Francis is that he keeps referring us back to the Catechism of the Catholic Church. So, when we listen to him bolviate in an interview or at other times, we have to filter what we hear through the Church's teachings found in the Catechism of the Catholic Church. He has told us he is a son of the Church and accepts all those teachings as we should also!

What is clear though and Pope Francis knows this, is that the Vatican bureacracy needs to be reformed and he has put those who work in the Vatican on notice that the Vatican can't be self-serving but must serve the needs of the Church worldwide, especially local Churches and their bishops.

All governments can be dysfunctional. I have read that you Americans are having a government shut-down right now so dsyfunctional is your government. The same can be said of the government coming from the Vatican bureaucrats. This pope wants to reform the Vatican way of doing things. Can he do it? I think he has a will and will make a way! He won't make many friends in the Vatican because of it and thus he had better watch his back and recall the painting over the altar in the chapel of the Office of the Inquisition! 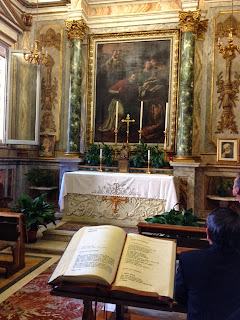 "I have decided not to try to interpret this pope's remarks which he makes off-the-cuff any longer."

Excellent decision, Fr. McDonald! The constant obsession of some with these daily blatherings has begun to smack of a kind of papolatry unable to discern any difference between once a generation (or century) infallible definitions of eternal dogma and passing indications that a pope is personally as human and fallible as the rest of us.

And again I say: yes, indeed, Henry! We need to begin to get that we are a One, Holy, Catholic, Apostolic Church, the MYSTICAL as well as earthly body of Christ.

Pin/Gene - What quotes from the Catechism of the Catholic Church that I have quoted do you disagree with?

Ah, Ignotus. More of your incredibly dishonest manipulation of people's words. I must say that the level of your deceit and prevarication are truly impressive, and your persistence in them remarkable. Do these traits come naturally to you or did you have to study somewhere? Regarding the Catechism, I do not disagree with any of it. Regarding your glib references to it...even the Devil can quote Scripture...or the Catechism.

Pin/Gene - I am glad that you accept the Church's teaching as found in the Catechism. I also accept it which is why I quote it. Will wonders never cease...?

As much as you seek to find ways to distance yourself from me, we travel the same route it seems...