SOME SAY I'M CLAIRVOYANT BUT MAYBE I'M NOT 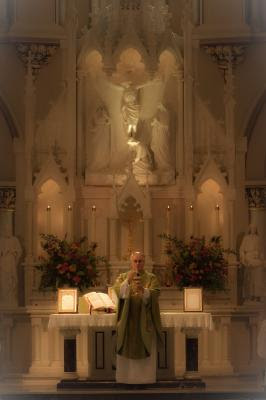 I've blogged about this before, but I really wonder if down the road, in the future, if we could have two forms of the vernacular Mass,Ordinary and Extraordinary.

Many bishops, priests and laity who object to Pope Benedict's liberal allowance of the "unreformed" Mass, what is now called the Extraordinary Form, say that they object precisely because Vatican II asked that this Mass be reformed.

Well how about a reformed Extraordinary Form Mass based upon the following proposal:

1. The Mass in the vernacular using the reformed propers, prefaces, calendar and lectionary of the post Vatican II Mass.

2. But using the Order of Mass of the Extraordinary Form,including all of its General Instruction and Rubrics and keeping all the parts of this Order of Mass that are prayed quietly by the priest (including the Roman Canon, which would be the only one allowed for this option). Of course, we would maintain the post-Vatican II active participation in the verbal and internal ways with all the people's parts in the vernacular spoken and heard!

No one could say that this form of the Extraordinary Mass isn't unreformed. That argument would go by the wayside. More people would be exposed to the EF Mass in this form since most Catholics do prefer the vernacular for their parts and all the parts they hear. The fixed parts that are quiet would remain in Latin.

So what do you think of my clairvoyance?
Posted by Fr. Allan J. McDonald at Friday, March 18, 2011

The damage already done to something that was not broken is huge. I can't speak to your possible clairvoyance, but I sincerely hope the EF is not again touched. I pray, instead, for the SSPX to come into full communion with Rome. I was raised with the EF, and I love it and miss it. What I find with the NO, in most places, is a lack of reverence. There is a sense, instead, more in keeping with a family gathering, and it is very hard to identify this with worship.

Bill, I believe the Ordinary Form can be very reverent if celebrated by the book (saying the black, doing the red) and using good liturgical music including singing the introit, offertory antiphon and communion antiphon. My opinion too is that we returned to kneeling for Holy Communion and on the tongue this one reform alone would do much to recapture the lost reverence that many people experience in poorly celebrated, improvised, sloppy Ordinary Form Masses.
Training altar servers to be more reverent and regimented would go a long way too.
I just had Mass with our elementary school children. They receive Holy communion so quickly in their little hands and are off to the pew again. I really wonder if they have the sense of reverence I had when we knelt for Holy Communion and didn't rush it. Just my two cents.

I love the Traditional Latin Mass, but I have often wondered why we could not have the same rite offered in English as well. I would have no objection to their co-existence, however I would hope that the Latin would be preserved because it is a sign of unity in the Church and it is the language of the Church. Its un-mutability insures the protection of the meaning of each word.

Now, one small observation: Maybe I'm missing something, but, as I read it (hopefully using a "hermeneutic of continuity") I am not convinced that Vatican II specifically asked that this Mass be reformed. The actual language of Sacrosanctum Concilium specifically says:

The Council also desires that, where necessary, the rites be revised carefully in the light of sound tradition, and that they be given new vigor to meet the circumstances and needs of modern times.

Does that automatically mean that there WAS any necessity of revising the rites--especially as radically as was done? Maybe not?

The same document also tells us:

Particular law remaining in force, the use of the Latin language is to be preserved in the Latin rites.

and, especially this--which comes immediately BEFORE the first quote I cited:

Lastly, in faithful obedience to tradition, the sacred Council declares that holy Mother Church holds all lawfully acknowledged rites to be of equal right and dignity; that she wishes to preserve them in the future and to foster them in every way.

I think we could agree that this point has not exactly been obeyed.

I only point this out, because I believe that certain factions who misused their authority "over-reformed" the liturgy and we have suffered devastating consequences for their experiments.

If indeed something in the EF was not “reformed” as required by Vatican II, why wouldn’t the Pope have pointed out a need for correction when he called for celebrating the EF?
What do those protesting priests and bishops cite as the problem or problems?

Regarding those PROTESTers, who are they to object to what the Pope decrees? Are they Congregationalists?

I think the objection is that there are now two forms of the Latin Rite Mass which is a bit novel in Church history. The Novous Ordo of course is the reformed Mass, but many feel it went too far.

The altar servers at the High Mass I attended on Ash Wednesday looked as sharp as a Marine Drill Team. It was noticeable. If they had been off half a step one of the equally choreographed priests would have mowed him down. As far as reverence, we all knelt and took on the tongue, fed by hand as children of Mother Church.

Concerning your clairvoyance, Father, if you'll pick my brackets next year I'll split the proceeds with the parish.