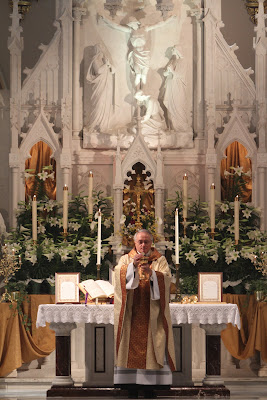 I don't have any photos of it yet, but our Solemn Sung High Mass in the Extraordinary Form for the Vigil of the Solemnity of Saint Joseph was absolutely stunning, inspiring and beautiful.

Our choirs under the direction of Ms. Nelda Chapman, our music director and organist, and our assistant organist Harold McManus, sang Schubert's Mass in G Major flawlessly. It is a very lovely choir setting and our choir did it with ease! Beau Palmer chanted in an exquisite way according to Gregorian melodies the Introit, Gradual, Tract, Offertory and Communion Antiphons. No hymns were sung until the recessional when we sang an English hymn, O Joseph, Mighty Patron.

We had about 150 in attendance for the Mass on a Friday night at 7:30 PM and not a Holy Day of Obligation. Many spoke to me afterward saying they had not been to a Mass like that in over 45 years. Some said it brought tears to their eyes.Many of the younger people who had never experienced anything like this asked why in the world this type of Mass isn't offered more often.

Others said that the Church made a tremendous mistake is dumping this style or order of Mass in favor of a too simplified and less dignified form of it. Thank God for Pope Benedict who has returned this form of the Mass back to the clergy and laity. It is truly a gift and as such and because it is worship and prayer it will build the Body of Christ.

Our deacon and sub-deacon did a wonderful job. Their parts and movements are the most complicated. The sub-deacon is actually a permanent deacon, Donald Coates and the deacon is actually a priest, our parochial vicar, Fr. Justin Ferguson. I hear they did what they were suppose to do well, although I couldn't tell. You really need eyes on the back of your head for this Mass when you are the priest celebrating it. Of course the acting deacon was none to pleased with the celebrant when he took his "ite missa est" from him by mistake.

We had at least eight adult servers.

From an ecumenical point of view, our choir director/organist is a United Methodist who knows both forms of the one Roman Rite backwards and forwards and our organist is a Southern Baptist. Now how's that for ecumenism????? And in the Extraordinary Form to boot!
Posted by Fr. Allan J. McDonald at Saturday, March 19, 2011

Right on Father!!! Thanks again, it was magnificent! In little old Macon Ga such a beautiful and reverent Mass.

Of course the acting deacon was none to pleased with the celebrant when he took his "ite missa est" from him by mistake.

Of course, it is the deacon (rather than the celebrant) who chants the Ite, Missa est in an OF solemn Mass as well as in an EF solemn Mass.

But, perhaps on this special occasion your slight pastoral departure from the rubrics elevated the parish patronal occasion even more.

Great going. Wish I'd been there. Maybe your fine exaple will encourage your fellow priests in the Diocese.

It was beautiful, moving and uplifting, sacred and reverent. As I was sitting there I could not help but wonder what in the world where they thinking when they came out with the novus ordo Mass. At a time when the layity are the most educated in church history, when all could understand the EF, they went and dumbed it down to a level of a third grader. Shcubert was great, when do we do Palestrina?

Wish I could have been there!

Anonymous, it's the FRUIT of his fine example (i.e. the laity's getting on board) that will encourage other priests in the diocese.

Last night I experienced true active participation. Accustomed as I am now to the "normal" High Form of the EF where I try to follow along with spoken parts in Latin, at the Solemn Sung Form of the EF I was freed by the Choir to feel the beauty and reverence of the Mass work upon my soul and feel my spirit lifted on high with our prayers and the incense. I spent most of the Mass with my eyes closed, passing in my minds eye through the veil of Heaven.

"..I was freed by the Choir to feel the beauty and reverence of the Mass work upon my soul and feel my spirit.."