A Catholic Lutheran Ordinariate? It could happen! This is the interior of a Lutheran Church. Looks Catholic doesn't it? 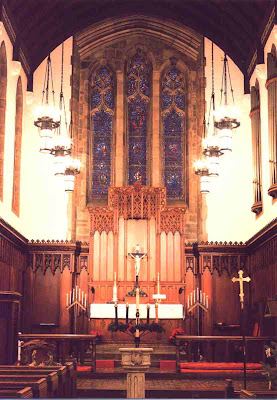 As you know, I am clairvoyant, but maybe I'm not. But in other posts I have indicated that the reforms of Vatican II and the liturgy is what has allowed the Catholic Church to work for Christian unity in earnest. In this regard, Pope Benedict is the pope of Christian unity.

In terms of the Orthodox, the Eastern Rite of the Church is a special way to bring about the eventual reunion of the Orthodox while preserving their patrimony of liturgy, devotion and faith, as well as their bishops and priests and deacons.

Read the following. It might be possible in the future to have a Lutheran Ordinariate!!! I predicted that only a few months back and maybe a Methodist one and a Presbyterian one. Who knows where it will all end:

Congregation for the Doctrine of the Faith official: ecumenism’s goal is union with Pope; Lutheran ordinariate in works?
March 03, 2011

In an interview with The Portal-- a new publication devoted to the ordinariate of Anglican communities received into the Catholic Church-- an official of the Congregation for the Doctrine of the Faith emphasized that the goal of ecumenical dialogue is the restoration of full communion between non-Catholic Christians and the Pope.

“The ordinariate is very important to the Holy Father,” said Father Hermann Geissler, the Austrian priest who leads the Congregation’s doctrinal office. “The ordinariate promotes unity and is a powerful instrument for unity, it will help Christians to be evangelists.” Noting that “we must cooperate and grow together,” the priest said that the Church will be enriched by the Anglican patrimony of music.

“The goal of the ecumenical movement is complete visible union with one Christ and with Peter in one Church,” Father Geissler emphasized.

The Portal also reported that the Congregation for the Doctrine of the Faith has begun to receive requests from Lutherans to establish a similar canonical structure that would allow them to enter the Catholic Church while retaining aspects of the Lutheran heritage. “The Holy Father will do all he can to bring other Christians into unity,” Father Geissler commented.
Posted by Fr. Allan J. McDonald at Thursday, March 03, 2011

This is encouraging news. Now if we could just get a "Traditionalist Catholic Ordinariate" :-)

I wonder what Pater Ignotus thinks of this post.

Still hoping, waiting, and praying for Pater Ignotus's answer on the TLM in his parish.

As to Templar's comment about a Traditionalist Ordinariate - if not why not?

I do not know precisely who you're talking about, so my two thoughts may or not be pertinent.

(1) While I believe in the possibility of conversion, I have never seen an older priest change his liturgical spots.

(2) Would anyone really want a priest to celebrate the TLM who is antagonistic to it. I certainly would not. (Let him confine his abuse to the ordinary form.)

There are Lutheran churches out there, many of them in fact, that look even more "Catholic" than the one in the photo. It's not uncommon in the Lutheran Church to see a crucifix above the altar.

And the Lutherans, along with the Anglicans kneel for Holy Communion. What's up with that? Shouldn't we too?

Father!! Don't I cause you heartburn enough with my constant references to kneeling for Communion without you encouraging me to it? LOL

Frajm. Is a traditionalist ordinariate even a possibility?

If the Society of Saint Pope Pius X was in a regular situation with the Church and their bishops and priests not suspended, then they could be that Ordinariate. But keep in mind there is also the religious communion of the Society of St. Peter that functions in somewhat the same way but still under the normal bishops of the Church.

I have heard some speculate that they can forsee a "Grand Design" for teh SSPX to assume such an Ordinariate once they are regularized. Nothing to support that rumor, but myself I can picture it easier than I can having the SSPX integrated into whatever Diocese they presently reside in, that's for sure.

The FSSP (in my humble opinion) suffer somewhat by being subordinated to Diocesean Ordinaries, only because so many of the Bishops are not overly supportive of the Traditional Rite. I would give my left arm for an FSSP Parish in the Diocese of Savannah.

Frajm. With no intent to be disputatious, as I am in over my depth, how do the clerics of SSPX differ from the clerics of the Anglicans or Lutherans. The SSPXers have no historical doctrinal or dogmatic differences. Help me to understand it better, and thanks in advance for your efforts

They are completely a part of the Church with a valid priesthood and sacraments. They are Catholic. However, I beleive that the ordination of bishops without approval from the Pope is what led to the bishops being excommunicated, not the priests and laity. However, the priests were suspended, meaning they have no "faculties" to celebrate Mass in the diocese in which they live and function as their bishop would be the local bishop of the Latin Rite. So the Masses they celebrate are valid but illicit.

If some arrangement came about where they were a special "prelature" of the Holy See of an Ordinariate under their recognize bishops, then that could happen, just as it happens in the Military Archdiocese.

Most people who have read this blog since December 2009 know who I'm speaking about (Pater Ignotus).

I agree with both of your points.

However, Sumorum Pontificum allows that if there is a stable group in a parish that requests the TLM, then the pastor is obligated to allow the TLM in his parish. He doesn't have to say the Mass himself, but he should allow someone else or find a priest who will.

I guess I'm tilting at windmills ala Don Quixote. I first posted months ago trying to get Pater Ignotus to answer the simple question about allowing the TLM in his parish. So far, all we have heard is a deafening silence.

Just a simple yes or no will do, then I'll go back into the history books!

Isn't Fr. Ignotus' disobedience in not offering TLM a form of "social injustice?"

It's a wonder he hasn't dragged out his dog-eared "only when pigs fly" illustration about the difficulties of translations.

There's a pattern, agenda, format, rut, to the man I dare say.

Not trying to stir things up, but don't we already have, de facto, a variety of ordinates considering how much variation exists in the bishoprics? the subsequent post about Seattle is case in point.

The title hereof has been haunting me, particularly the words, "THE CATHOLIC CHURCH AS THE BRIDGE TO PROTESTANTISM."
In some ways haven't we built a bridge or bridges causing a migration of many Catholics to various Protestant denominations?
Why are we down to 25% or 30% Mass attendance? What has happened?

A.32, what you describe is true, but much of it is based on the diminishment of the Catholic faith and liturgy by following the "spirit" of Vatican II rather than the letter of Vatican II. We have tried to become more Protestant to appeal to Protestants but they keep moving further away from us as we try to get closer. The key is the reform of the reform in continuity with the history of the Church. We are seeing that in the new English Translation of the Mass and the liberal allowance of the Pre-Vatican II Mass, now called the Extraoridnary Form.
However, the reformed Mass has opened the door to reforming the Protestant liturgies of the Episcopal Church and now Lutheran Church and making sure these are valid while still respecting their patrimony of prayer, liturgy and devotions. This is a good thing if it brings about Christian Unity.