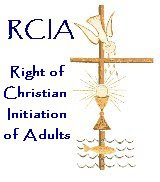 Last year's newly baptized bringing forward the gifts for the Holy Eucharist. We only had five last year. This year we have 16. The 16 will begin their exorcisms this Sunday and for the next two Sundays! 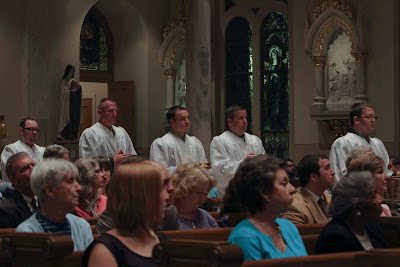 Last year's candidates being received into the Church at the Easter Vigil: 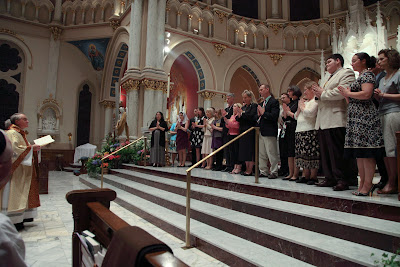 The Third, Fourth and Fifth Sundays of Lent are the days when the Scruntinies are celebrated for the Elect. The Elect are the unbaptized candidates for the Easter Vigil when they will receive Baptism, Confirmation and Holy Communion and thus be fully initiated into the Church.

The Second Sunday of Lent is the Sunday that those who are baptized in other Christian Communions are acknowledged and prayed over, seeking God's grace.

Often when you read what theologians have to say about a certain ceremony of the Church, you will hear them say for example, that Baptism washes away Original Sin. The Scruntinies purify the elect of the effects of evil.

In my mind, I think it is better to say that Jesus washes away Original Sin through the Sacrament of Baptism. Jesus purifies the human person of the effect of the devil in the Scruntinies. The ceremonies and prayers are the means by which God's grace in the Divine Person of Jesus is made manifest to the one receiving the grace and to those who witness it.

We prayed over our baptized candidates last week, about 15 of them. This Sunday and the next two Sundays we will pray over our Elect, about 16 of them.

I can't wait for the Easter Vigil when the Risen Lord fully initiates all our candidates into His life, death and resurrection through the ceremonies of the Church and Her sacraments.

This is what Father Paul Turner writes about the Scruntinies:

Tell people they will face a scrutiny before they can join your community, and they will probably say, "Thanks, but no thanks." Boldly, our church expects not one but three scrutinies of elect before their baptism at Easter. Scrutinies are rites of self-searching and repentance.

When people from another spiritual background seek baptism in the Catholic church, they do so by stages. First we accept them into the order of catechumens. Then as they complete their catechetical formation we enroll them among the "elect," or those chosen for baptism.

This rite of election generally coincides with the beginning of Lent. Three times during Lent the church prays the scrutinies to encourage a spirit of repentance among those who seek a worthy celebration of baptism. Although scrutinies have returned fairly recently to Catholic parishes, they originated early in church history. St. Ambrose and St. Augustine celebrated them in the fourth and fifth century to mark the spiritual progress of the catechumens. The moral preparation of catechumens included prayers of exorcism to drive out the spirit of evil which kept them from embracing Christ as their light.

In the scrutinies the church discerned if those exorcisms had achieved their effect. Catechumens entered the church, stood barefoot on goatskin and renounced evil influences all night. Those unworthy of baptism had to wait another year for Easter to roll around again. Today's scrutinies seem less intense. They still include an exorcism, in which the priest or deacon prays that the spirit of evil may be replaced by the spirit of good.

Their purpose is not so much to examine the candidates' mental readiness but their spiritual readiness. Scrutinies offer the catechumens the support they need to approach the waters of baptism worthily. For those who are already baptized, the scrutinies invite us to embrace the same spirit of self-searching and repentance. At Easter we renew our baptismal promises as we see the catechumens baptized. So during Lent we renew our repentance as we see the elect scrutinized.

The scrutinies remind us of the seriousness of our Christian life and inspire us to turn from evil and pursue good. They enliven our recommitment to Christ at Easter.

These rites are intended to purify the catechumens' minds and hearts, to strengthen them against temptation, to purify their intentions and to make firm their decision. They are designed to help the elect recognize anything that is weak, defective or sinful in their hearts so it may be strengthened. In other words, these rites are to be focal points in the ongoing conversion of the elect, times for coming to grips with the reality of evil and the struggle necessary to root it out of their lives (and our lives as well).

The scrutinies are celebrated on the Third , Fourth , and Fifth Sundays of Lent. The Roman Ritual of the R.C.I.A. states that ordinarily Cycle A readings are used for these three Sundays, regardless of the year. Each scrutiny occurs after the homily at Mass in the presence of the community. The scruntinies consist of prayers for the elect by the whole community and an exorcism with an imposition of hands. The elect are then dismissed from the assembly.

Thank you for explaining this process...very educational!

Often I wonder what are the tipping points that cause people to inquire enough about Catholicism so as to actually make the effort to go to RCIA classes and to continue all the way to entering the church.
What are some of the common motivators?
Do most of them hit a 'bottom' of sorts before being motivated to do such a big thing?
Any converts on this blog that could chime in?