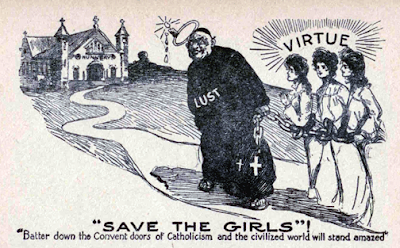 The National Catholic Fishwrap, I mean, Reporter has a brief article on Richard Sipe. Sipe has been an out-spoken person asking for sweeping reforms in the Church due to the sex scandals. In this article it is pointed out what Pope Benedict should do. "What can Benedict do to resolve the sexual crisis of Catholicism? At the very least he could open up for discussion and study the antiquated sexual teachings on such common practices as birth control, use of condoms and sex outside of marriage. Further, he could lead the way to making celibacy optional for priests and allow women in the ministry."

The other thing Sipe says is that Pope Benedict and most of the bishops of the world should resign. Read the NCR article by pressing HERE.

Richard Sipe is a former Dominican priest who in the 1960's left the priesthood and married. He is a product of the flakey 1960's.

In an obvious prejudicial statement against the elderly,(an anti-elderly position) both the NCR and Richard Sipe conclude the following: "But it is unlikely that any of these reforms will happen as long the aging pope and the old men of the Vatican persist on retaining their power and control."

Keep in mind that Richard Sipe is probably as old as the pope, not to mention most who read the NCR and write for it! These are the mirror image of the Holy Father, the hippie generation of the 1960's and 70's! Richard Sipe and his ilk are in arrested development, still banging that drum from the 1960's and thinking it is cool, man!

In the 1970's Richard sipe was hired by St. Mary Seminary and University in Baltimore, Maryland to teach pastoral theology, which means that he taught me pastoral theology at St. Mary's Seminary.

He was a lightweight teacher and extremely boring. All of his students made fun of his class. It was something we had to endure and we learned nothing except the following two things that stick in my mind to this day:

Richard Sipe is an old man, if you pardon me borrowing from his jargon, who thinks that he can effect change and reform in the Church through all of his efforts to take her down. He is a Pelagian formed by a corrupt translation of the Mass which has poorly translated prayers that indicate that we can do all things and God will simply pat us on the head and say, "go for it.!" Sipe is a sad character indeed.

Richard Sipe has become a left wing Episcopalian. He should be honest about it and join them.
Posted by Fr. Allan J. McDonald at Wednesday, March 23, 2011

"Left-wing Episcopalian..." Fr. you are being redundant! LOL!

By sharing the beliefs of Sipe, you've also just described the average Catholic in the pews in too many parishes and, unfortunately, too many priests as well.

"Is it any wonder that the children that Richard Sipe was speaking of in the 1970's no longer practice the faith today as adults . . . "

I just returned from a Mass that probably was more carefully and reverently celebrated than most OF Masses. Even so, I had (as always) to work hard with my private prayers to provide myself with the same spiritual experience and conscious reminders that it was the same perpetuation of the same Sacrifice of the Cross as was made so transparently evident at the EF Mass I attended Sunday.

Obviously most people do not make the effort required for full prayerful participation at an OF Mass. And probably could not cut through the distractions to prayer even if they tried to. So it is not really surprising that so many do not really practice the Faith, even if they remain formally in the Church.

How sad. Richard Sipe shows the dangers of 'cafeteria Catholicism' especially when mixed with bad logic. He apparently thinks that if the Church would just stop calling certain things sinful there would be no more sin. His seems to be the philosophy that 'if I'm a Christian I want to do God's will. So if I want to do it, that makes it God's will.' Talk about a recipe for perdition.

The teachings of the Catholic Church will always be an obstacle and a nuisance to those who choose to live a life of sin. Considering the road this man has taken, it should be of no surprise to hear what comes out of his mouth. And quite frankly it is no surprise that this publication gives him press space. I once complained about having that publication in the narthex, and I was told it was there so we could have fair and balanced news next to the National Catholic Register. I gasped.

Frajm, thank you so very much for not drinking the Kool Aid at the Seminary. You are indeed a breath of fresh air. You and priests like you are, along with Pope Benedict XVI give us hope for a reform of the reform.

I know and believe that the Gates of Hell shall not prevail, but the struggle is very ugly during these modern days of trial and turmoil, not only for our Church but also for our country. In both cases, objective truth is the most tragic casualty.

How very foolish it is for any parish to provide the National Catholic Reporter, even under the guise of wanting to present a “balanced presentation of the news.” That approach reminds me of handing a thirsty person a glass of pure water, with only a tiny drop of deadly poison in it. To the average person, providing that fish wrap suggests approval of it.

My only disagreement about your comments is your lack of respect for the fish. It’s an insult to the fish that might be wrapped up in that liberal rag.

So, we have one inept who lives dissent, and then we have an Anglican parish coming over to the Church: http://catholicvote.org/discuss/index.php?show=papist

Such are the ironies of the days we live in. :0)

So, What is up with the seminary? Are they crazy? Do they teach this stuff just to test the acolytes?

Sipe's obsessions in particular with Mother Teresa and bringing up the gifts pointed to his eccentricities in the '70's but apart from that he was quite boring as a teacher of pastoral theology.

At least Sipe has tried to understand and explain the biggest issue that people outside of the church have with whats happening inside the church. The continued sexual abuse of innocent children and the covering up of it by the Cardinals.

He may have been boring in the 70's but he has shined a light into ongoing systemic sexual abuse within the Catholic Church and the denial of and, the coverup of the same.

Vaughan Dennis, I totally second your comment and was so glad to find it here amongst the 'd'ers: deflectors, deniers, dissosciators, disbelievers, denigrators and displacers. Sipe is accused of these in regards to the true faith, most of the true faithers are these in regards to human victims of abuse. Hmm, wonder which group Jesus spent most of his time and effort with.