IN THE ARCHDIOCESE OF PHILADELPHIA IT IS JUDGMENT DAY, PRAY FOR CATHOLICS WHO MUST ENDURE WHAT SHOULD NEVER HAVE COME ABOUT!

UPDATE: On this Ash Wednesday, the NEW YORK TIMES prints the shocking truth and asks some good questions to which the Cardinal has no answers. Have mercy on us O Lord! Press these sentences to read all about it!
IT'S AN APOCALYPTIC JUDGMENT DAY FOR THE ARCHDIOCESE OF PHILADELPHIA AND THE LEADERSHIP THERE HAS NO ONE TO BLAME BUT THEMSELVES!
There are many liberal or progressive Catholics who simply do not believe anymore in Original Sin, Mortal Sin, death, judgment and hell. Their theology of love, especially for the guilty, does not allow for the final judgment and eternal damnation. I wonder if an earthly experience of such will change their minds? 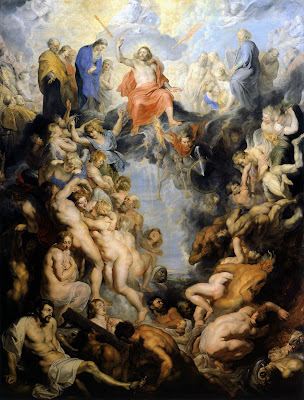 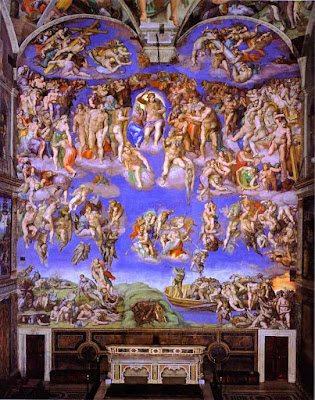 It is judgment day in the Archdiocese of Philadelphia. Since a "zero" tolerance policy was presumably put into place in all dioceses of the USA about eight years ago, a Grand Jury investigation of the Archdiocese of Philadelphia (the second in five years)indicates that as many as 31 priests who have had some kind of accusation against them in terms of inappropriate behavior with minors, are still functioning as priests.

Within the next two days, the Archbishop Cardinal of Philadelphia will suspend upwards to 21 of these priests until these priests can be exonerated or permanently removed from ministry. Cardinal Justin Ragali hired an independent outside prosecutor to examine all the records of these priests and he is now following this person's recommendations.

Why this wasn't done over eight years ago is mind blowing!

The priest-personal director of this archdiocese is the first high diocesan official charged with endangering the safety of children by the way he managed miscreant priests in Philadelphia, and who may well be sentenced to prison time for his actions of mismanagement. With that we have entered a new phase in this scandal. What bishop, archbishop or even cardinal will be charged with a like-crime, endangering children by their mismanagement of priests who abused children and some cases in the most egregious and unbelievable of ways. Time will tell.

The bishops of the Catholic Church who mismanaged priests thought they were above not only canon law, but civil law are going to have to have their day of reckoning. What were they thinking? They haven't told us! And that is the other part of this scandal, the lack of transparency in "what were they thinking" by disregarding both Church Law and Civil Law in how they managed priests who committed mortal sin and civil crimes against innocent children and their families.

Children who were abused (now adults) and their families have every right to know the truth about why this happened to them and they do deserve appropriate compensation for the egregious mismanagement of priests by bishops in this regard.

Catholics in general must be assured that priests who abuse children will be removed from ministry when it is discovered they have done so. If the civil statutes of limitation have expired, there should be an open and transparent canonical trial in the Church of these priests. If they are innocent, the facts should show it and they should be returned to ministry. If guilty, they should be laicized.

The greatest tragedy in all of this, for victims and for Catholics in general and now for bishops who may face jail time, is that none of this had to happen.

Canon law, both old and new, had laws for bishops to follow and the bishops chose another way. That's water under the bridge now, but I hope a lesson learned.

The 1970's with its new morality, hatred of authority both clerical and civil, suspicion of traditional punishments and lax attitude toward criminals has produced a scandal that is apocalyptic for the Church that once prided herself on discipline and moral integrity.

The three things that bishops must recognize are their top priority are:
1. Appropriate screening and evaluation of those who seek to become priests
2. Appropriate supervision of priests in ministry
3. Following canon law and civil law
Posted by Fr. Allan J. McDonald at Tuesday, March 08, 2011

Fr. McDonald: "The bishops of the Catholic Church who mismanaged priests thought they were above not only canon law, but civil law are going to have to have their day of reckoning."

Isn't their blind eye to sin and violation of moral law -- and their oaths as bishops and shepherds -- the worse offense? And perhaps THAT day of reckoning the more to be dreaded? (Remembering that "the road to hell is paved with the skulls of bishops.")

I was stunned to watch the bishops Dallas meeting and hear only law mentioned--rather than sin, which surely ought to be their concern.

Their 'Theology of Love' is a perversion of real love, which gives the strength to admit the Truth and act on it.

"their day of reckoning"
How about the superiors of religious orders such as the Abbott of St. John's monastery? This is the mother ship of the "Pray Tell" blog, haven of dissent and protector of abusers. If any of you still frequent this blog I urge you to bring this up and if it does happen to get posted, see how long it takes to get removed. This is the horrible little secret that the dissenters there don't want to talk about. This despite their repeated use of the abuse scandal as an argument against the Church's moral authority.
To see more go to behindthepinecurtain.com

What makes me mad is the Spirit of Vatican II libs are the culprits for most of this mess, and because us traditionalist are the DEFENDERS OF THE FAITH, the media and secular liberals try to make it look like that this is somehow our fault, when it's their on liberal buddies in the Priesthood that caused the mess. It's circular insanity. Geeez!

Anonymous said above, “Their 'Theology of Love' is a perversion of real love, which gives the strength to admit the Truth and act on it.”
What seems to be lost to the bishops is that the above indictment applies doubly to their refusal to enforce Canon 915 for the “Catholic” politicians who make it clear, by action and words, that they have no intention of changing.
Is their approach to receive Holy Communion any different from a fellow who puts a sign on his front and back that says, “ I am living in an adulterous relationship; I disagree with the Church’s teachings on sexuality and have no intention of changing my behavior.” Let’s further assume he is preceded in line by Nancy Pelosi. The bishop gives her HC and then refuse HC to the adulterer. What logical explanation would suffice for the bishop’s behavior?

This is a tragedy for Philadelphia, for Cardinal Rigali & for all involved.

As a Philly native who now lives elsewhere, I am very proud of my city's Catholic, blue collar identity. Cardinal Rigali is special to us & we have adopted him into our hearts - once done for Philly fans, not easily 'undone'. We may boo, but we stick by you, even when it is rough going.

That being said, I have also recently experienced a priest sex-scandal in my current parish. The priest (who has admitted his actions) has been suspended & is facing ongoing multiple counts of sex abuse charges in several states. This priest was part of our parish family for many years & the scandal has rocked our world, not to mention providing quite a bit of social gossip in a small southern town that is 99% Protestant.

So reading this particular blog has been very difficult & I find myself trying hard to make sense of it all. What happened that an entire generation of Catholic priests went astray & dear Jesus have mercy on us as we reap the 'fruit' they have sown through their 'progressive' ideals.

I am hurt, bewildered & angry of course. Our priest ate dinner in my home a week before his arrest. He was my confessor. He spent time with my son (believe me, we have had that conversation post event). Even harder for me was watching my priest renew his vows at the Chrism Mass & then seeing him lay prostrate in front of our altar at Easter, only to be arrested a short time later.

Those of us who are personally dealing with the aftermath of 'progressive Catholicism' are paying a price beyond measure. We are paying with our hope in the Church, our love for the Priesthood, our trust & our faith. There is not a dollar figure that can be placed on any of this - our hearts are broken & there is no going back.

I love Cardinal Rigali & will continue to pray for him. I struggle, but I pray daily for our fallen priest as well.

But make no mistake - God is cleaning house. He is making it clear to Priests, Laity & Bishops as well, that His words to us are Truth & that we need to begin to act like Catholics first & foremost.

It is time for us to go to Mass regularly, believe what we speak when we say the creed, make a sincere confession regularly & start living our lives in faith.
When this begins in earnest, God will have room to act in our lives & our hearts will begin to turn, once again, towards Him.

If not - may God have mercy on all our souls. -pgal