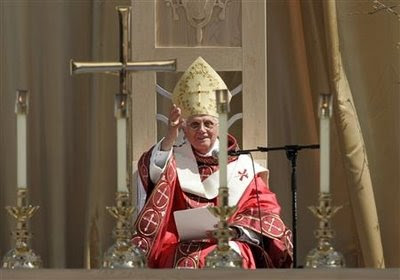 I happened to watch our Holy Father in the Roman parish this morning at 9 am, Mass and dedication of the new Roman parish of "San Corbiniano all'Infernetto - Casal Palocco".
He was consecrating a new and ultra-modern Church. It was carried live on the Vatican website.

What is interesting about the local Masses (Roman) that our Holy Father celebrates is that for the most part these are just like any other Mass in a local parish throughout the world. They are simpler and the Holy Father is surrounded by the local talent and ministries of the parish, such as the parish choir--for good or ill. What we see in these Masses is the Bishop of Rome functioning as any other bishop in the world, visiting one of his parish churches, consecrating a new one they have just completed and joining in their celebration of the Mass.

The setting of a local parish church is more intimate too. The local parish this morning showcased all their choirs, young children, teenagers and adult choirs. These sounded like most parish choirs. Take that for what it means!

The Holy Father celebrated the entire Mass in Italian, except for the Eucharistic prayer beginning with the preface dialogue which was in Latin. I think this has become the custom of the Holy Father even in local celebrations of the Mass in Rome or Italy, to pray the Eucharistic prayer in Latin, beginning with the preface and the rest of the Mass in the vernacular. Is that a foreshadowing of things to come in the distant future???

However, the altar was decorated after it was anointed by the Holy Father in the "Benedictine" way with the six candles and crucifix on the center and also with the extra "bishop's" candle. The Mass, though was celebrated toward the people not ad orientem.

The custom in Italy and thus at this papal Mass is for the people to kneel during the Eucharistic prayer beginning only when the priest calls down the Holy Spirit upon the bread and wine and then standing again for the singing of the Mystery of Faith. That is the extent of the kneeling for most of Europe.

The new church had no altar railing, however, as is his custom, the Holy Father distributed Holy Communion to people kneeling on a kneeler placed in front of the Holy Father. Is this a sign of things to come? I'm clairvoyant or maybe I'm not as you know.
Posted by Fr. Allan J. McDonald at Sunday, March 20, 2011

I am assuming that is an older photo of the Holy Father in another Church due to to use of the older Pallium that he used in the beginning of his Pontificate. Or does the Holy Father rotate its' usage on occasion?

"What we see in these Masses is the Bishop of Rome functioning as any other bishop in the world, visiting one of his parish churches, consecrating a new one they have just completed and joining in their celebration of the Mass."

The Church Universal needs to see more of this example of the Holy Father in his role as Bishop of Rome, stressing the equals in the phrase "first among equals". While his does this as Peter's successor, it would be a great reminder and perhaps a more powerful demonstration to his brother bishops.