ANNECDOTAL EVIDENCE THAT THE NEW ENGLISH TRANSLATION OF THE MASS WILL BE ACCEPTED RATHER EASILY AND WELL! ARE YOU EXCITED YET? 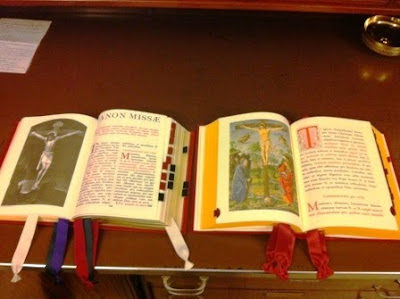 Last week I mailed to each of our nearly 1,500 households a copy of Father Paul Turner's "Understanding the Revised Mass Texts" which explains the changes in the English Mass and shows a side by side illustration of these changes in the congregation's parts.

I had several people this past Sunday thank me for sending this book because it helped them to to understand and embrace these upcoming changes.

During the season of Lent our parish has "home faith groups" who meet each week. The "text" for these groups this year will be Father Turner's booklet. Last night I met with the group leaders and about fifty other people to go over the book and to help the leaders use the leader's guide and the do's and don'ts of a small group leader.

During the course of the catechesis, I prayed the opening collect for one of the Sundays in Ordinary Time from our current missal and then prayed the revised prayer from the new missal.

I asked, can you tell a difference. They looked at me glazed eyed. No, they said, read it again. Keep in mind they did not have the prayers in a written form before them. So I read it again.

They said they couldn't tell that much of a difference, but couldn't remember words or order of words from my first reading the old and then going to the new.

This tells me something important about listening only and not reading along while one listens. I don't think the laity for the most part will even notice the major change in these "priest's" texts as they listen to the priest pray them. What they will notice will be the more formal sounding the language is. However, I don't think they will be confused or befuddled by the more complex language and long sentences in the new translation. If the priest does his homework and studies these prayers before going public, that too will ease the transition considerably. 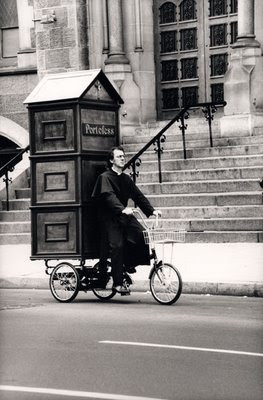 I must confess that I have prayed the new orations and prefaces at Sunday Mass. I didn't tell anyone in the congregation that I was doing this. I sing all these parts at every Sunday Mass I celebrate. (Just know that I know that this is illicit! But folks give me a break I was trained in a liberal seminary in the 1970's and received my malformation there, I mean formation. Old habits are hard to break. Besides, how many priests change major parts of the Mass and no one calls them out? But I digress.)

No one and I mean no one has said anything to me about these prayers, yea or nae. They just aren't critical about the Church's prayer and they don't listen to prayers to criticize syntax, vocabulary or the long sentences. They are worshiping. That changes everything.

So, fear not. The new translation will be well accepted. Good catechesis is necessary.

However, if a priest or catechist has a negative streak, is into doom and gloom and has an agenda to thwart this translation and to be a factionalist by being publicly negative about these changes and those mean old people in Rome who didn't consult them on it and who did some back room politics, then yes, the congregation might not be as kind about the translation as those who are properly formed by their pastors. Sometimes congregations take on the personality of those who lead them for better or for worse!
Posted by Fr. Allan J. McDonald at Thursday, March 03, 2011

Frajm. That's one more thing that Fr. Ignotus should learn from you.

It seems the closer we get to this much needed reform, the more those on the outs react against it. That "unnamed blog" you posted about is going Charlie Sheen crazy! It seems now approval of gay marriage is on the table over there,too. So just as many suspected it wasn't about the translation as much as their lost grip on power and control.

Actually this Sunday past I thought I did catch the sounds of some sentence strings that weren't quite "mundane enough". I went flipping through the Missal briefly to see if I could find what I had just heard, and then felt consumed with guilt for having lost my concentration on he Mass itself and put the book down. I suspect some, like me, catch bits and pieces that aren't "as they have been" and some of the moe skilled among us may even catch it and smile inwardly. The vast majority may not care one war or the other unfortunately.

That unnamed blog reminds me of so much I learned in the 1970's. Someone is still banging that failing 1970's drum. But fortunately its getting fainter and fainter!

oh dear Father, it WAS noticed...but we kept silent intentionally so that we wouldn't inadvertently make you feel self-concious about it and then stop.
We also noticed some you started, then abandoned..perhaps because they were too noticable? No need to answer that.
Shhh...
Just keep doing it :)