AN INTERESTING INTERVIEW, MAKES ME WONDER IF KNEELING FOR HOLY COMMUNION WILL BE MANDATED, BUT I'M NOT CLAIRVOYANT OR AM I? 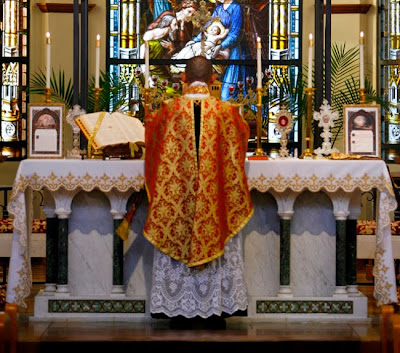 Remember, the Devil has no knees! 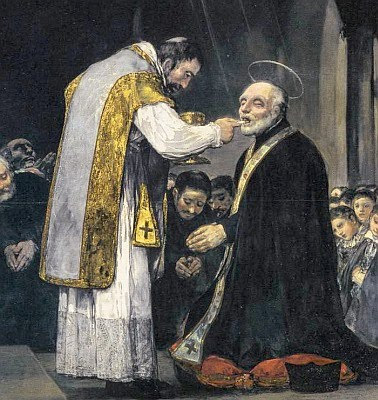 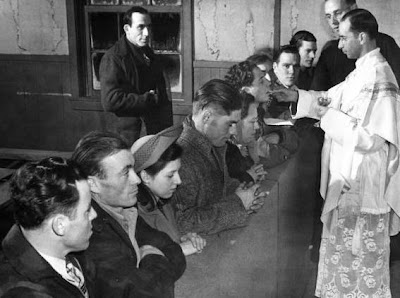 This is an interesting interview. Will kneeling be mandated for receiving Holy Communion? Time will tell, but it certainly isn't in the present even though the Holy Father insists on it when he is distributing the Precious Body of our Lord. I firmly believe that no other reform of the Mass will have a greater impact on the reverence the laity hold for our Lord in Holy Communion than the return to kneeling to receive our Lord.

Friday, March 04, 2011
Don Nicola Bux on the Instruction and the Reform of the Reform
Relevant excerpt of an interview granted by Monsignor Nicola Bux, consultant to the Office of Liturgical celebrations of the Supreme Pontiff, to Italian daily Avanti, and published today:

At what point is the "reform of the reform" desired by Benedict XVI?

With this expression, which Ratzinger used when he still was the Cardinal Prefect of the Congregation for the Doctrine of the Faith, he meant that the reform that took place after the Council had to be resumed, and in some ways corrected there where, always using his words, the restoration of the painting had been too much, that is, by trying to clean, it had taken the risk of removing too many layers of color. He started this restoration through his own style. The Pope celebrates the liturgy in a subdued, not loud, way. He also wants the prayers, songs, and anything else not to be in exhibitionist tones. And two special actions in his liturgies that are obvious should be noticed: he places the Cross between himself and the assembly, indicating that the liturgical rite is not addressed to the priestly minister, but to Christ; and kneeling in the reception of Communion, indicating that this is not a supper, in the worldly sense of the word, but a communion with the body of Jesus Christ, that is worshiped first, in the words of St. Augustine, and only then eaten.

How many obstacles is the Motu proprio Summorum Pontificum on the pre-Conciliar Mass facing?

I believe that, currently, the obstacles are becoming feebler than at the time in which the Motu proprio was issued, in 2007. Through the internet, one can see how there is a discreet movement of young people who look for and, as much as it is possible, go to the Traditional Mass, also called the Latin Mass or Mass of All Time. And this, I believe, is a very important sign to gather.

It is clear that the pastors of the Church, first the bishops and then the parish priests, although often saying that we must be able to grasp the signs of the times, an expression very much in use after Vatican II, often fail to understand that the signs of the times are not defined by them, but they happen and are regulated mainly by young people. I think this is the most interesting symptom, because, if [only] the elderly, the adults, went to the Traditional Mass, one might harbor a suspicion that it is nostalgia. The fact that it is mostly young people who seek and participate in the Latin Mass is completely unexpected and therefore deserves to be read, understood, and particularly accompanied by the bishops.

I think the Pope acknowledges this and that is why he intends to make a further contribution through an instruction on the application of the motu proprio, to help everyone understand that, in addition to the new form of the Roman Rite, there is the ancient or extraordinary form.
Posted by Fr. Allan J. McDonald at Friday, March 04, 2011

Kneeling for Mass and Altar Rails are part of our Catholic Identity. Both should be restored in Churches worldwide. It should be mandated, well it is, but Bishops national conferences have been able to override it. That is what has to stop. We have norms. Now we have norms contrary to the norms. Stand up people ! This will be the new norm. And after 30 years people say, "We've been standing, why should we kneel now?"..Well how did we get in the upright position in the first place? Did it occur to parishoners to all start standing up one by one all at once. Or did someone, somewhere tell us to get up. Decided in some committee hall somewhere?

Anonymous is absolutely right.
Kneeling for Holy Communion might very well help to restore reverence and/or strengthen belief in the miracle of the Consecration. It might well cause a renewed respect and appreciation for the office of the ordained ministers, especially for our priests.
Eliminating the use of extraordinary ministers of the Eucharist would also be a help in that regard. The Holy Eucharist is so sacred and special that it can only be confected by the Priest, and it should only be distributed by the Priest, Deacons and instituted male acolytes.
By receiving under both species are we attempting to emulate the Protestant experience of the supper as opposed to the more appropriate Holy Sacrifice of the Mass, the re-presentation of Jesus sacrifice on Calvary, which it actually is. A return to receiving under the species of bread only would help eliminate the mass confusion at Holy Communion, the grabbing of the host, walking away with the host, dropping of hosts, etc. Use of the patens would reinforce the respect due Jesus.

The post starting with "Anonymous is absolutely righ" is not the same as the Anonymous being complimented. To avoid confusion I will now and in future identify myself as "Anonymous 32"