BEFORE AND AFTER RENOVATIONS, CAN YOU TELL THE DIFFERENCE AND WHAT DO YA'LL THINK?

Click on pictures once or twice to enlarge them: 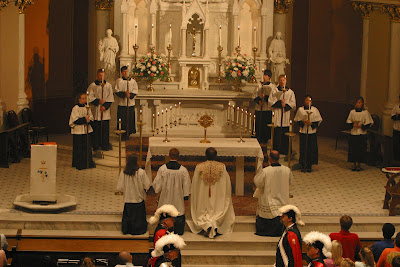 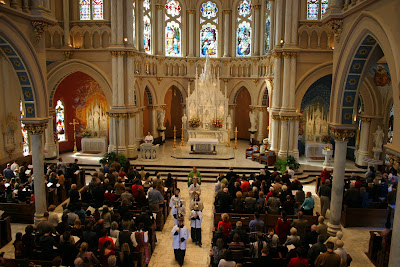 However I mourn the loss of the obvious elvation of the High Altar which you lose with the new hieght of the sanctuary that deleted the steps (or covered them more like). The new elevation also of the Table Altar blocks the carved Last Supper on the High Altar.

Both configurations deseperately scream for an Altar Rail.

What is that thing on the left, that looks like a basin sitting on the floor with a microphone and parament sticking up out of it--the ambo?

I do miss the the pattern on the old floor, but otherwise the renovations are definitely an improvement.

An Altar Rail would be beautiful there. Otherwise it is still beautiful. A nice place to worship.

What happened to the original altar/communion rail? Landfill?

...and who in their right mind would have gotten rid of it (the altar rail)?

The altar railing that was there was not of the same quality marble as all the other marble in the Church,mostly Cararra, but some Georgian. It had fallen a number of times, was terribly cracked and weathered, almost as though it had been outside.
But down the road, who knows what might return in a better form.