THIS POPE ALWAYS CONDEMNS WHAT HE RELISHES DOING, WHICH IS AN INTERESTING STUDY IN MORALIZING BY CERTAIN CLERICS 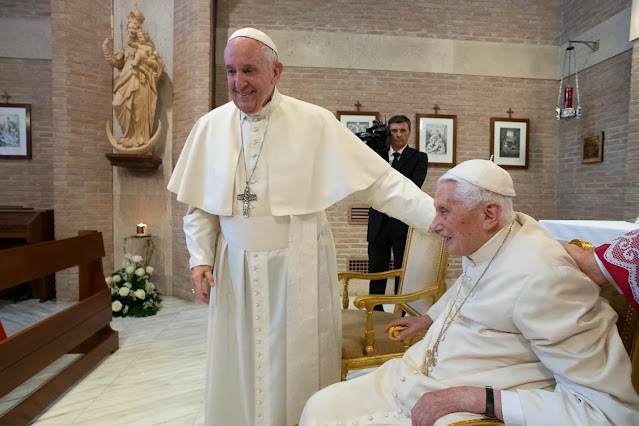 One of the things the pope has complained about and moralized about is talking too much. The term in Italian that he uses and in a way Italians understand it, is Chiacchierare. The way you pronounce it in Italian is what too much chatting or talking sounds like if you were to symbolize it in a cartoon. There’s a name for this kind of word, but it slips my aging mind at the moment. (UPDATE AS IT JUST CAME TO MY AGING MIND, ONOMATOPOEIA:

This pope gives interview after interview. At one time when the Supreme Pontiff gave an interview, the fact of the interview made news as well as its well reasoned content. There was no chiacchiere. But today, if Pope Francis isn’t talking (chiacchiere) about something formally or informally, that makes news.

Pope Francis gives interview after interview and evidently two in a row. Each interview, no matter where, formal or informal, creates head-scratching moments of wondering what did he mean, could it be this, that or the other.

Crux reports on another interview of chiacchiere of this pontiff who protests too much about this Italian word.

You can read it here, but here is a sound byte from the Crux article. Implicit in His Holiness comments about Pope Emeritus Benedict XVI is a begrudging resentment of the pope emeritus, his solicitude in a monastery as a contemplative who doesn’t visit the sick, lives in the Vatican and takes the name pope emeritus.

If there is any pope who is the anti-Benedict, it is this pope and we all know it from what is implied in this pope’s papacy and since day one. And the chiacchiere of this pope is not only in words and decrees, but his many gestures too.

Pope: ‘If I resign one day, I’ll hear confessions and visit the sick’

ROME – In yet another wide-ranging interview…
Posted by Fr. Allan J. McDonald at Wednesday, July 13, 2022

I think the Holy Father simply has low self awareness. His gaffs are similar to the uncle who says things at family gatherings forgetting who is in the room.

Father McDonald said..."Implicit in His Holiness comments about Pope Emeritus Benedict XVI is a begrudging resentment of the pope emeritus, his solicitude in a monastery as a contemplative who doesn’t visit the sick, lives in the Vatican and takes the name pope emeritus."

Father McDonald, I do not have any reason to believe that Pope Francis' comments in question are as you described.

Emeritus Benedict XVI/Ratzinger has insisted that he has enjoyed a tremendous relationship with Pope Francis. Emeritus has praised Pope Francis as a holy man.

To his great credit, Pope Emeritus has rejected narratives that have attempted to pit Pope Francis, and Emeritus, against each other.

"While I am an adamant opponent of feminism, I am no less staunch an opponent of chauvinism wherever I see it — and I do see it reappearing in the traditional movement, along with other -isms (e.g., antisemitism, libertarianism, sedevacantism) that are incompatible with Catholic tradition.

"The revival of traditional liturgical practice has permitted the reappearance of some extreme points of view that deserve refutation."

LOL - Traditionis Crudelis (Custodes) was a big middle finger from Pope Francis to Pope Benedict. Now explain THAT away

FYI, the last statement is pure nonsense. What about the revival of a myriad of liturgical abuses in PF's pontificate, like in Chicago? Now explain THAT away.

Here is a howler from the "Church of What's Happening Now" aka the Church of England:

— A senior bishop of the Church of England said this week the Church has no “official definition” of a woman amidst an evolving understanding of gender in the contemporary world.

Adam Kendry, a lay member of the General Synod, the Anglican Church’s legislative body, posed a written question: “What is the Church of England’s definition of a woman?” during the July 8-12 meeting of the synod.

Unlike Pope Francis, such Churchmen as Cardinals Brandmüller, and Pell (they are far from alone), have expressed concerns in regard to the manner in which Emeritus Benedict XVI established himself as Emeritus.

Cardinals Brandmüller, and Pell, have insisted that for the sake of Church unity, the Church must move beyond the manner in which Pope Benedict XVI established himself as Emeritus.

Cardinal Pell declared: "The protocols on the situation of a pope who has resigned need to be clarified, to strengthen the forces for unity."

Cardinal Pell has insisted that a retired Pope "should be re-nominated to the College of Cardinals so that he is known as ‘Cardinal X, Pope Emeritus’, he should not wear the white papal soutane (cassock) and should not teach publicly."

Emeritus Benedict XVI has rejected the above.

Cardinal Brandmüller has criticized Pope Benedict's resignation, as well as the manner in which our former Pope established himself as "Emeritus."

Cardinal Brandmüller characterized Emeritus' conduct/manner of dress as a threat to Church unity.

None of the above has applied to Pope Francis. He has not criticized Emeritus in such fashion.

Do Cardinals Brandmüller, and Pell, hate Emeritus Benedict XVI as they do not march in lockstep with Emeritus' resignation/rules-of-conduct that Emeritus established for himself?

Let’s return to Planet Earth. Please respond to my two points rather than posting a plethora of non sequiturs

In regard to the article in question, Pope Francis did not say anything against Emeritus Benedict XVI.

Pope Francis: "If I resign one day, I’ll hear confessions and visit the sick."

Pope Francis would opt for the title “bishop emeritus of Rome."

Again, all of the above demonstrates that Pope Francis resents Emeritus? I do not get that.

From 2013 A.D. to date, countless folks within the Church — left-wing, right-wing, moderate — have insisted that Benedict XVI's manner of conduct, and dress, as Emeritus, will not stand in regard to a Pontiff who would resign as Pope.

Even Churchmen who have great filial love and respect for Emeritus Benedict XVI have criticized Benedict XVI's manner of conduct/dress that he has invented as Emeritus.

I have demonstrated that even such Cardinals as Pell, and Brandmüller, belong in the above category. They have insisted that Church unity is at stake in regard to the role in question that Emeritus Benedict XVI has invented.

However, unlike such Churchmen as Cardinals Pell, and Brandmüller, Pope Francis has not criticized Benedict XVI's invention in question — that is, the role of Emeritus.

But Pope Francis has been cast by certain folks as having set himself against Benedict XVI's role as Emeritus.

"At the moment of his election I experienced, as many, a spontaneous feeling of gratitude toward Providence...the Lord was turning, so to speak, his gaze to the Universal Church and invited us to a more extensive communion, more Catholic. Your goodness, evident from the moment of your election, has continually impressed me, and greatly sustains my interior life."

I said..."From 2013 A.D. to date, countless folks within the Church — left-wing, right-wing, moderate — have insisted that Benedict XVI's manner of conduct, and dress, as Emeritus, will not stand in regard to a Pontiff who would resign as Pope."

I wish to state please that I do not oppose the manner of conduct, as well as dress, that Emeritus Benedict XVI has established from 2013 A.D. to date.

There isn't any question that former Pope Benedict XVI, via his resignation as Pope, and invention/conduct/manner of dress as Emeritus, has concerned many Churchmen. That has included Churchmen favorable to former Pope (Emeritus) Benedict XVI.

They have insisted that Emeritus Benedict XVI has spread confusion throughout the Church.

But said claims have not flowed from Pope Francis.

I stand with Pope Francis. In turn, His Holiness has stood with Emeritus Benedict XVI.

But I imagine that the Church will clarify the role of an Emeritus Bishop of Rome.

A discussion here would be very nice.

Instead, all we are served is Mark Thomas' fan fiction for the alleged pope and it is beyond tiresome.

TJM, stop wasting your time. Let him dialogue with himself. He's the only one buying the B.S. anyway.

I am not a fan of popes resigning. It insinuates that they can’t control their staff or have tired of micromanaging the Church.

Indeed! I know the feeling!

Had I known Pope Benedict was contemplating retirement I would have seriously offered to be chief of staff. No friends to lose and compassionate in severance. The finances would be in order and the various ‘mafia’ would be suppressed if not suppressored. I think he had some very dirty laundry that is still not dry, but hey, when in Rome. It would have been invigorating.