We all know that the reformed modern Roman Missal, itself reformed a few times since 1970, allows for a lot of ad libbing. “The celebrant may use these words or something similar.”

The area where so many priests and bishops ad lib is usually at the “Introductory Rite” formerly called the Prayers at the Foot of the Altar. Doing so at this point in the Mass, however, completely destroys the trajectory of prayer that the simplified Introductory Rite has if only celebrants wouldn’t destroy it with their own banal secular words.

This is what happens. The Mass begins with the Entrance Chant, either the Introit of the Day or a hymn of some kind or both. Either way or all two combined, the Entrance Chant is prayer which leads to the Sign of the Cross and the liturgical Greeting.

But what happens then? Some celebrants step out of the trajectory of prayer and the sacred and start bantering with their own banal and secular (non sacred) words of warmth and giddiness. The Lord be with you; And with your spirit. Good morning church. I hope you are having a great day. I greet all our visitors and I am trying really, really, hard to make you feel welcome in our most inclusive parish. What a great day. The sun is shinning and we are God’s shinning priestly people reflecting that love and inclusivity. Isn’t that wonderful? Do I hear an “amen”? Well, enough of this, let’s call to mind God’s love for each and everyone one of us, a love that knows no limits and is unfathomable, so much so, I really can’t describe it, but you know what I mean. Well, anyway, let’s ask God for forgiveness. Of course, it’s not the same as the Sacrament of Penance, but it does forgive you your venial sins and if you do it with perfect contrition, it will even forgive mortal sins, I think. Well, anyway let’s get to one of the many penitential acts there are that the Church of today allows except for the prayers at the foot of the altar which isn’t allowed and really makes the Introductory Rite way too long, you know with that way too long psalm 42 and useless repetition, like the priest’s Confiteor which is longer than our new and improved shorter one and then the server’s Confiteor with its absolution, and not only that , two absolutions, but really four if you count the ones directed toward the priest after his Confiteor, as though there really needs to be this kind of clericalism at the beginning of Mass, you know the priest’s Mass and the laity’s Mass. Our new Mass gets rid of all of that, Thanks be to God, but let’s not jump the gun to the end of Mass. So, I’ll use the Confiteor. I confess… 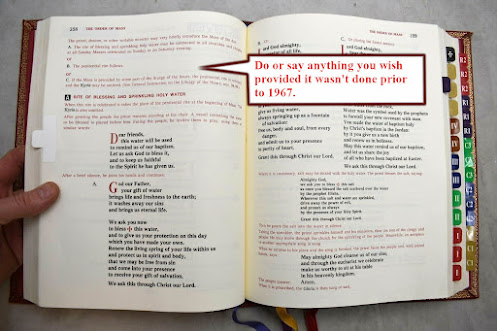 Ad libbing is more than distracting. It indicates that the priest is bored with the Ordinary and uninspired by the Propers. He changes the conversation, as it were, to what occupies his mind at that moment. What is worse is that he has a single preoccupation: social justice, racism, even abortion, so that he becomes repetitive, stale and works against himself. I have often heard priests comment that it is difficult coming up with a homily. This is another case for Latin, for if you are given readings and study the words inch by inch, there are lifetimes of lessons available to you.

Propers? They are almost never used. Priests who customize the Mass to suit their needs show contempt for the congregation. The congregation is entitled to a Mass said in conformity with the approved texts and rubrics.

rcg - I have found that preparing a homily is a task far more involved than "studying the words inch by inch."

The text is, of course, where any preacher ought to begin. For many years I have relied on the commentary by the Anglican scholar Reginald Fuller's book "Preaching the New Lectionary" to give me insights into the nuances of history, culture, and language that are present in the texts.

Then, I need to understand to whom was St. Paul writing and why, does the passage from Isaiah come from the first, second, or third section of that book, or what was John's purpose in the frequent use of the words "the Jews" in his Gospel.

I have to be aware of the particular circumstances and setting of my congregation(s). What matters to them? Has there been a significant moment in the life of the parish? Am I addressing school childrem, the Teen mass, or the regular daily mass folks?

I agree that the scriptural texts are the basis, but simply studying them is only the beginning of homily preparation.