IN LIEU OF THE 1962 ROMAN MISSAL, WHAT ARE TRADITIONALISTS TO DO? 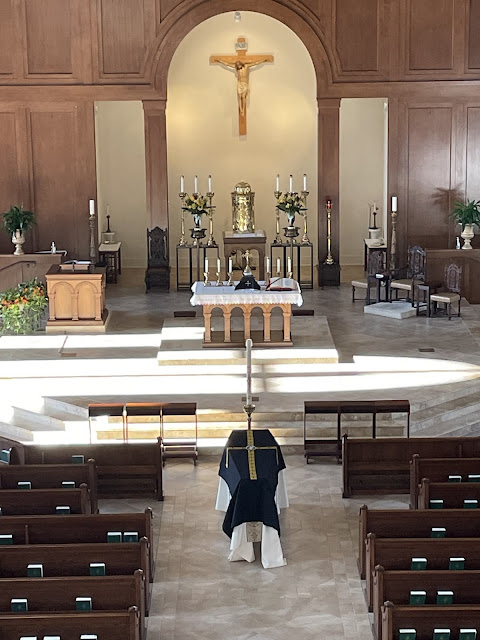 It is possible that the 1962 Roman Missal will be suppressed as this is what Pope Francis wants, except maybe for the FSSP who will not be able to expand their parishes beyond what they already have.

Thus, what John Nolan describes in a comment on another post is the only way forward for the vast majority of Catholics who celebrate the 1962 Roman Missal now:

Back in the 1970s, and having experienced the splendours of Brompton Oratory, I saw little point in retaining the Tridentine Mass. Far more important was the retention of Latin, dignified ceremonial and decent music.

The Latin 1970 Reformed Latin Mass can accomplish just about all that John Nolan describes as the scola uses chants from the 1974 Graduale Romanum.

In the Sung 1962 Roman Missal, the PATFOTA are prayed quietly by the priests and servers, as are the offertory prayers, thus using the impoverished Offertory Prayers during a chanted 1970’s Reformed Latin Roman Missal would not be noticed by the congregation, except for the liturgical geeks present.

But simply allowing the PATFOTA, the Gradual/Alleluia from the Graduale Romanum, 1974, the older Offertory Prayers, the trice said “Lord I am not worthy”, the Last Gospel and the rubrics for the Roman Canon from the Ordinariate’s, Divine Worship, the Missal, would be a wonderful way to be ecclesially united with Pope Francis and Cardinal Elect Roche as it concerns the only Liturgy they seem to profess.

But as John Nolan points out, even without the 1962 elements added to the 1970 Latin Roman Missal, one can still have a very reverent Latin High Mass celebrating the Reformed Roman Missal. Let’s make dO with that as it isn’t unreasonable.

And remember, we don’t worship the form of the Mass but the Most Holy Trinity, His One Sacrifice on the Cross, His Word and His Real presence in Word, Sacrament and clergy and laity. And the most important part the the Mass is “Ite Missa est” go, you are sent to follow the Most Holy Trinity at home, work, play and the public square.

Rather than just being liturgical geeks we can be disciple geeks too!

There are plenty of bishops who have ignored Traditionis Crudelis (Custodes) so don’t give up on the EF. Talk about “noble simplicity” compared to the Leviathan that is the OF!

Are you aware of the Indian firm “Catholicliturgicals”? Go here https://www.catholicliturgicals.com for extremely inexpensive appointments for your home altar and they offer pretty gothic and fiddleback vestments. I once too pity on a poor congregation without rose vestments and appointments to furnish the altar and clergy for the two beautiful Sundays of joy amid penance.

The pricing is shockingly low!

This is all B.S.. Everything that comes out of this papacy is worthless.

They've lost already. We just have to be patient. The Novus Ordo Establishment is collapsing under its own worthless, bureaucratic, groupthink, anti Catholic, New Springtime, cupcakes and balloons dead weight.

I should point out that the parish to which I referred is the Oxford Oratory which was founded in 1992 (London and Birmingham are 19th-century foundations). The Solemn Latin OF Mass is not in lieu of the Extraordinary Form, which is said every Sunday and Holy Day (and sometimes celebrated in its Solemn form).

Birmingham chose ten years ago to change its Solemn Mass from OF to EF and Oxford may follow suit. The decision rests with the Fathers, most of whom are on the young side.

The Roche must be grieving