INDEPENDENCE DAY, AKA, THE FOURTH OF JULY, AT THE BEACH 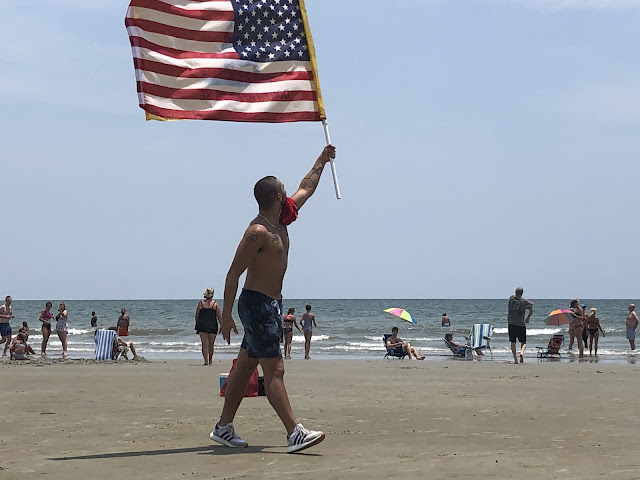 A killing in Highland Park Illinois where 6 people were murdered during a 4th of July Parade by a Biden Democrat. So this story will fade quickly because the US National media is evil.

Bobby Crimo, aka Awake the Rapper, is the shooter responsible for the July 4 Highland Park Parade shooting.

He was a die-hard Trump supporter who released a QAnon-inspired song called “I Am The Storm.”

This is Trump’s Fourth of July gift to America.

As Illinois grieves from Monday's tragedy, photos quickly spread suggesting that suspect Crimo was a Donald Trump or "MAGA" supporter, referencing photos which appear to show him at pro-Trump rallies and sporting Trump memorabilia.

Crimo liked a May 27 tweet that read: "Protect the 2nd Amendment like your life depends on it."

Following an attack on the US Capitol on January 6, Trump's Twitter account was permanently disabled for "inciting violence."

It's distressing how the 4th has been perverted on both sides, particularly the so-called "patriots".

None are "The Storm". Storm of what? They are nothing and only incite violence, hatred and division.

Americans seem like they've been rewired - two very opposite poles. It is a shame and, increasingly, the country seems unrecognizable not that some improvement regarding what many pine for wasn't needed.

I just want to live quietly and decently. I want people to be treated fairly, live well and enjoy what our freedoms provide and our tax dollars pay for. I don't want to have to take some side.

You obviously get your "news" from places like the Dailymail.

The Daily Mail labeled Crimo a “Trump-supporting youngster” based on pictures shared on the Internet. However, based on his overall profile, it’s clear Crimo was aligned with progressives, socialists and Antifa.

A copy of Crimo’s Twitter account was saved before being taken down and it clearly shows Crimo’s far-left leanings. He’s pushing far-left publications and far-left politicians like Obama. He’s not far-right – at all.

He was raised in uber liberal Highland Park. Nice try but no sale.Strange on how almost all of these tradegies take place in Democratic controlled cities with the strictest gun law regulations.

As I said, as the "media" begins to discover the real Crimo, this story will fade away because it does not fit the lefty media's narrative.

TJM - I simply repeated unsubstantiated allegations from the media . . .

Which is EXACTLY what you did, just hours after the tragedy when no one had had a chance to substantiate anything.

This will further give you the sads. Red States are winning the post pandemic economy while your Party's states (high taxes and high regulation) are flopping. I thought your Party cared about the working man and woman? And on another front Elizabeth Warren is outraged that Pregnancy Help Centers outnumber abortion mills 3-1.