I read on another blog a comment from someone about his joy that Cardinal Sarah had resigned because he was so “pre-Vatican II”. I have said it before and I will write it again, the term pre-Vatican II used by certain Catholics is equal to the “n” word in its derogatory nature. It was and is used to shame people, as though being pre Vatican II is the sign of being less human and less Catholic.

Thus, I hope that the next CDW prefect will be Bishop Vittorio Viola, currently Bishop of Tortona. Look at how His Excellency recently celebrated the Ordinary Form of the Catholic Mass and his vesture in the photo below!

Cardinal Sarah and evidently Bishop Vittorio are not pre-Vatican II, they, unlike some, are post spirit of Vatican II prelates and are showing us the way to be authentically Roman Catholic within the sane approach of Pope Benedict XVI, that of renewal in continuity. That is the only way forward. We don’t need to go backwards to the spirit of Vatican II as the 11970’s types still exerting influence! 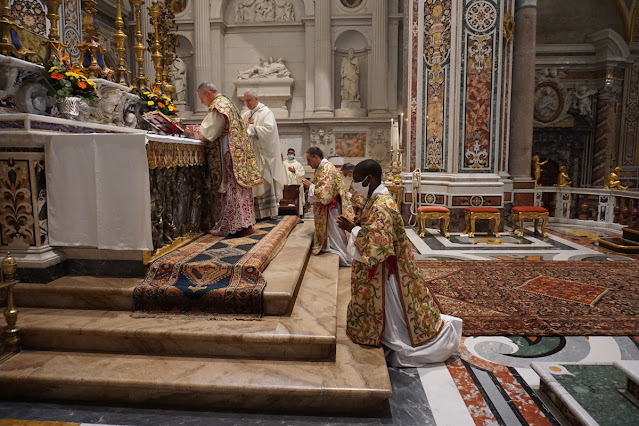 Any traditionalist worth his salt KNOWS Cardinal Sarah isn't "pre-Vatican II". He's just "non-rupture" and anyone with an IQ higher than a turnip knows that Vatican II didn't call for half the B.S. we are forced to swallow every week at Mass.

Cardinal Sarah was just a sensible Cardinal and certainly preferable to the crop of "interesting" cardinals that Pope Bergoglio has packed the college with.

Cardinal Sarah has made it clear that in line with our Vatican II Era Popes, that he is a man of Vatican II.

Cardinal Sarah has made it clear that Vatican II has blessed the Church.

"In my 47 years of life as a priest and after more than 36 years of episcopal ministry I can attest that many Catholic communities and individuals live and pray the liturgy as reformed following the Council with fervor and joy, deriving from it many, if not all, of the goods that the Council Fathers desired."

"This is a great fruit of the Council."

"It is true that the vernacular has a positive place in the liturgy."

Cardinal Sarah's defense and promotion of the authentic Second Sacred Vatican Ecumenical Council marks him as a holy son of the True Church.

Cardinal Sarah has rejected the weaponization of the TLM by those who attack the reformed Roman Liturgy.

"There was also a pastoral reality here: whether for good reasons or not, some people could or would not participate in the reformed rites. They stayed away, or only participated in the unreformed liturgy where they could find it, even when its celebration was not authorized.

"In this way the liturgy became an expression of divisions within the Church, rather than one of Catholic unity.

"The Council did not intend that the liturgy divide us one from another!"

Cardinal Sarah thinks in line with the Church...that there isn't any contradiction between the TLM and Novus Ordo...there is not a rupture between the two forms in question.

Instead, there are two forms of the one Roman Rite.

The right-wing's war against the Novus Ordo is destructive. That is not in line with Holy Mother Church.

The left-wing's war against the TLM is destructive. That is not in line with Holy Mother Church.

Conversely, Cardinal Sarah's way — the promotion of the peaceful coexistence of two forms (TLM, and Novus Ordo) of the one Roman Rite — is, in turn, God's way, the Church's way, to secure liturgical peace within Holy Mother Church.

Cardinal Sarah, Father McDonald, as well as each Catholic who promotes the peaceful coexistence of the TLM, as well as Novus Ordo, are pioneers in the movement to implement the Church's liturgical peace plan.

The voice of Holy Sanctimony has spoken.

The voice of Holy Sanctimony has spoken.

Mr Thomas:
Please get your references straight. That is from St. John-Paul's 2003 Encyclical "Ecclesia de Eucharistia," from which Cdl Sarah gave lengthy excerpts. He often quotes popes to show that he is faithful to their teachings. But he does not leave it at that, and uses these quotes to level criticisms by showing how the quoted popes' teachings are not being followed:

Here an important criticism:
"I RAISE THIS POSSIBILITY of looking again at the Constitution and at the reform which followed its promulgation because I do not think that we can honestly read even the first article of Sacrosanctum Concilium today and be content that we have achieved its aims. My brothers and sisters, where are the faithful of whom the Council Fathers spoke? Many of the faithful are now unfaithful: they do not come to the liturgy at all. To use the words of Pope Saint John Paul II: many Christians are living in a state of “silent apostasy;” they “live as if God does not exist” (Apostolic Exhortation, Ecclesia in Europa, 28 June 2003, 9). Where is the unity the Council hoped to achieve? We have not yet reached it. Have we made real progress in calling the whole of mankind into the household of the Church? I do not think so. And yet we have done very much to the liturgy!"

And he offers solutions.

Unfortunately we all know what happened after this address to his proposed solutions, of who blasted him for suggesting that all priests begin facing east along with the faithful at the liturgy, and who muzzled any more talk of a Reform of the Reform.

As for the above quote from St J-P2 and the attitude of the hierarchy in denying there is a problem with the disastrous new liturgy, Michael Davies had a lot to say:

“In the meanwhile, the most obvious answer may be that Pope Francis has a habit of acting spontaneously. There may be no better or worse explanation for the pope’s acceptance of Sarah’s resignation than that he simply made up his mind to do it.”
From: “THE STRANGE CASE OF CARDINAL SARAH”
Analysis: VATICAN NEWS
Ed. Condon, Feb 20

Father McDonald said..."Cardinal Sarah and evidently Bishop Vittorio...are showing us the way to be authentically Roman Catholic within the sane approach of Pope Benedict XVI, that of renewal in continuity. That is the only way forward.

"We don’t need to go backwards to the spirit of Vatican II as the 11970’s types still exerting influence!"

Father McDonald, that is why you represent the Church's wonderful future. You have rejected the liberal's 1970s dead-end promotion of the fake Council.

As Pope Benedict XVI noted in 2013 A.D., the fake Council, as compared to the real Council, has been "the dominant one, the more effective one, and it created so many disasters, so many problems, so much suffering: seminaries closed, convents closed, banal liturgy … and the real Council had difficulty establishing itself and taking shape; the virtual Council was stronger than the real Council."

"But the real force of the Council was present and, slowly but surely, established itself more and more and became the true force which is also the true reform, the true renewal of the Church."

Cardinal Sarah, in line with Pope Benedict XVI, as well as all our Vatican II Era Popes, is a staunch defender, and promoter, of the real Vatican II...of the renewal in continuity.

As Father McDonald said, and in line with Holy Mother Church's orthodox thinking, the renewal in continuity is the way forward.

The way forward in not the liberal's 1970s approach — rejected by Cardinal Sarah.

Cardinal Sarah has also rejected the "traditionalist Catholic Movement's" hatred of the authentic Council...their liturgical warmongering against the Novus Ordo...their war against renewal in continuity.

The Church's way — the way supported by Cardinal Sarah, Father McDonald, and each Catholic who desires peace within the Church, liturgical peace, in particular — is the embracement of the authentic Council, as well as the TLM, and Novus Ordo.

Deo gratias for Cardinal Sarah, Father McDonald, as well as all who have embraced the renewal in continuity — the only way forward.


V is for Vicar...the Vicar of Christ. His Holiness, Pope Francis.

"The truth is that the Church is represented on earth by the Vicar of Christ, that is by the Pope. And whoever is against the Pope is, ipso facto, outside the church."


"Certainly the liturgical reform inaugurated by the Council has greatly contributed to a more conscious, active and fruitful participation in the Holy Sacrifice of the Altar on the part of the faithful."

LOL -wow, talk about delusional. Yet, far less people are showing up for Mass, so how can this be?

Before V II, about 80% of American Catholics went to Sunday Mass. Now with the "new and improved" Mass maybe 12% are showing up for Sunday Mass. So what am I not getting here?

Don't waste your breath. Holy Mark Thomas lives in his Holy illusion of a Holier-than-thou world of balloons, confetti and Holy brown-nosing, utterly bereft of any critical thinking capacity.

Comparing criticism of Cardinal Sarah with the n-word is offensive to anybody who had faced real racial prejudice. Calling someone "pre-Vatican II" addresses their attitudes, beliefs and actions; the N-word is a hateful label based on the the color of their skin.
This is every bit as unhinged as the Fox News host who called conservatives getting thrown off Twitter "the social-media Holocaust." Disgusting.

Pre-Vatican II is a term used by many as derogatory and to shame the person. In this regard it is like the "n" word. The use of like is a simile. It is not wrong to use similies or metaphors in English despite attempts by others to censor these.

By Holocaust, do you me Jesus Christ sacrificed in the Holy Sacrifice of the Mass and offered to the Father? Maybe you don't know the original meaning of the word and its religious significance.

Father, Holocaust, when capitalized, refers to the systematic ethnic cleansing of millions of Jews and others by Nazi Germany. The original meaning of holocaust dates back to the ritual sacrifices of the Old Testament. You will not see religious uses of "holocaust" capitalized in any Catholic doctrine.

Second point, not all statements that are derogatory or even insulting are the moral equivalent of the N-word. If I were to say you exhibit a poor understanding of American history, politics and social issues and also lack critical-thinking skills, that's not the same as using that racial epithet against an African American. I'm not saying things, mind you, that's purely a hypothetical, and it would be hypothetically based on your words and actions. I might be right or I might be wrong, but racism is an intrinsic evil, whereas talking trash to Father M is not.

In the Holy Sacrifice of the Mass, the Holocaust that is offered to God the Father in sacrifice is Jesus Christ. Thus He is the Sacrificial Victim, He is the Holocaust. That is why it is capitalized.

Biblical Holocausts predate the Shoah, also known as the Holocaust. It was an appropriation of this terms applied to the Shoah.

Abortion is an intrinsic evil and a verifiable act. “Racism” is in the eye of the beholder and highly subjective. Lefties call anything they don’t like racism.