WHY THE INSTALLATION OF ATLANTA’S NEW ARCHBISHOP WAS SPLENDID

Don’t get me wrong. I felt bad that Archbishop Hartmayer had no public send off from the Diocese of Savannah nor a public reception in Atlanta. The Liturgies of the Church should be public in normal circumstances even if for a major celebration it is a ticket only event. And there should be celebratory but simple receptions.

At Bishop Hartmayer’s ordination as Savannah’s Bishop in October of 2011, there was a wonderful reception outside the Cathedral in Lafayette Square. The setting was Southern Charm, Savannah!

Originally the Installation of Archbishop Hartmayer was to take place in a larger church in the suburbs of the Archdiocese as the Cathedral (which I love and is very elegant in its gothic simplicity) is too small. I guess they could have rented the much larger Episcopal Cathedral across the street which is quite beautiful.

There was only a handful in the Cathedral for this installation. But not only did this contrast it from all other Episcopal Installations but the manner in which the Liturgy was celebrated.

Today’s priestly and Episcopal ordinations as well as Installations have become examples of exactly what Vatican II didn’t want—exaggerated triumphalism. There are long processions of vested bishops, priests and deacons with trumpet fanfares and over the top music. Orchestras are used rather than just the organ or no instrumentation. These have become spectacles.

But not so for Archbishop Hartmayer’s installation. While certainly a cathedral full of people would have added to the solemnity and energy of the celebration, the selection of music and only the organ to accompany was splendid. I think there were two or three in the schola, but professional voices.

There was no processional  hymn, just organ accompaniment. All the hymns were simple and not bombastic as well as the English setting of the Mass parts.

My only criticism is that it would have been truly splendid if the official Introit in Latin and according to the EF format would have been chanted. It was omitted and substituted by the organ procession.

Apart from the propers not being chanted, everything else was quite splendid. Ad orientem at the cathedral’s original altar would have been better. The free standing altar is peculiar looking to me and out of place in this gothic cathedral. And removing it would make the sanctuary quite spacious. It is in the way as well as peculiar looking. The original altar, with tabernacle dead center, properly vested and with andeppendenium would have been perfect and a perfect symbol of the Triumph of Christ the King. 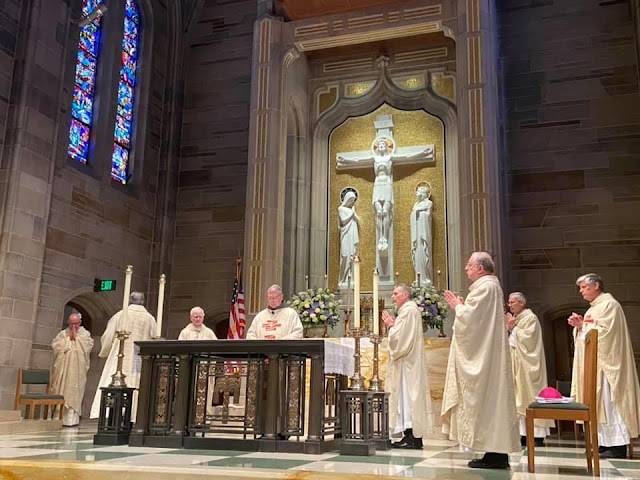 And there weren’t hoards of bishops crammed into the sanctuary. So unnecessary.

The Cathedral vestments worn I think can be placed in a museum now. Not so nice and rather peculiar looking. Maybe they were trying to match the peculiar free-standing altar?

And this was the reception outside the Cathedral following the Mass. Looks like EF types to me; they come out even in a pandemic! Of course, Tara it’s not or Southern Charm, Savannah! 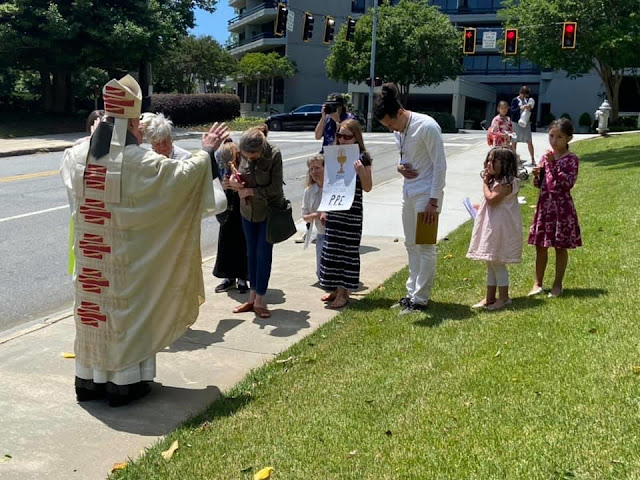 And finally I am truly grateful that the new Archbishop didn’t wear his Franciscan Birkenstock sandals  below his Franciscan habit. Those too can now be placed into a liturgical museum of the peculiar with buskins.
Posted by Fr. Allan J. McDonald at Thursday, May 07, 2020

Those vestments look like they are from the set of that "70s Show." They are not museum quality. They could be converted to gunny sacks

Horrendous vestments. Hard to take that seriously. Looks like the "church of nice" is making it's way inland from Savannah.

Father, you state everything so well. And I agree, they should remove that freestanding altar, and use the high altar, with that beautiful image of Christ on the cross.

The bishops looked as if they were wearing peasant smocks of a style common in Thomas Hardy's earlier days.

Was there any Latin at all in the service? Or did the whole thing suggest a Church which was apparently founded in 1965?

What's 'splendid' about it?

1965, splendid compared to what now passes as ordinations and installations since 1965. Incremental change in an organic way back to sanity.

Yes indeed, agree with vestments comments (and sandals comment)! Especially the mitre. WHEW, must be some sort of symbolism in those vestments that we here just don’t understand...

I saw a photo of the new archbishop wearing a business suit and seated behind a large desk inside a standard-issue office. That image pretty well sums up to me the spirituality of modern Roman Catholicism.

Ugly vestments. Hideous miter. Hard to believe that was the best that could be pulled together. As noted by another commenter, hard to take that seriously....particularly the miter.

The "business suit" has long been the norm in the US for clerics outside liturgical functions.

What is it supposed to look like, a shrine?

And is it supposed to be filled with religious brick-a-brack before the archbishop has even been formally installed?

I used to always check the Mass celebrated for the installation of a new bishop/archbishop. During Pope Benedict's reign of happy memory, some Latin was generally included either via the propers, motets, and the ordinary. I even recall one or two where the Mass was celebrated ad orientem. Once Pope Francis of unhappy present came along, it seemed Latin was dropped in the vast majority of these Masses. I guess these new bishops recognized there was a change in management.

Thanks for your hallmark snark. It really advances the discussion.

Sorry The vestments looked dumb. Like the Archbishop of Bacon

If I'm not mistaken, the photo depicts one of the first acts of the newly installed bishop:
blessing people who were standing outside his cathedral while protesting his policy of continuing the closure of archdiocesan churches until June.

In the Byzantine Rite, we don't kneel for blessings. I personally know three of the people in the photo, all of whom frequent our local parish from time to time, so they would be accustomed to standing for blessings.

However, I know that they also attend the old Mass here in the area, so they are most definitely "EF types."

DJR, I stand (or should I kneel?) corrected!

I have seen those horrid vestments a number of times in photos of archdiocesan events. I had hoped they might disappear when Archbishop Gregory left.....alas, they are still with us. What an embarrassment for us in the Archdiocese of Atlanta!

I suppose you should kneel if you're an "EF type," but if you're into Byzantine style things, you would stand.

Unless you want to wait for Pentecost Sunday at Vespers. Then you can kneel.

Or if you wait till the Great Fast next year to admit your unpardonable error, you will have to make a full prostration on the floor. But only if it happens on a Friday.

I'll see you at the next Forgiveness Vespers, then. Full prostration or nothing!

From an insider at the Installation, the two Savannah clerics there (one of whom is now the Archbishop) wanted to wear the Cathedral vestments not knowing that those were them. By that point it was not possible to back out since there are concelebrating matching sets and Archbishop Wilton Gregory had them designed, as I clear my throat. And yes, everyone agreed, including the new Archbishop of Atlanta, that these vestment inexplicable symbols look like Bacon which has gone to the bishop’s head with the miter. I doubt we will be seeing His Excellency wearing them again.

If there's ever a bishop of Macon, he can borrow these vestments in salute to the Macon Bacon.

Now I know where I have seen those vestments before. I saw a picture of Archbishop Gregory wearing them and I thought at the time how unflattering they looked.

Was that "insider" Bishop Boland of Fr. Migone?

I couldn't help but notice the miter. The Ceremonial of Bishops mentions two kinds: ornamented and plain white linen. The ornamented was usually white or gold with some embroidery. Nowhere does it say that the ornamented miter must match the vestments. It didn't for all the centuries before Vatican II. This matching-the-vestments miter thing is just a gimmick for vestment makers to make more money. So a bishop really needs only two: a plain white linen one for penitential occasions and when serving as a concelebrant with other bishops, and an ornamented one for most other occasions.

I shan't be to harsh about the vestments and miter, but please come on already its 2020 and still we have the ugly polyester 70's style vestments that look like they were made by 6th graders just like the felt banners that did and still do hang on each side of the altars in many Churches, we came from stunning Fiddleback and Gothic vestments of gold and silver designs to these. They inspire nothing and look dreadfully ridiculous on these men, why oh why do they continue to wear these?? And on a side note did anyone see the female "lector" wearing a male altar servers cassock and cotta? I sure did!

I did not realize that Archbishop Hartmayer was ordained by the now retired "Arch Liberal" Bishop of Albany New York Howard Hubbard, who by the way utterly wreckovated his German Gothic twin spired Cathedral of The Immaculate Conception so sad, and closed at least 33 parishes in the Albany diocese, I pray that Hartmayer does not gut his cathedral as well, it still has a high altar and marble communion rail and is ready for the return of the Traditional Latin Mass when it does return one day!!

I find it funny when Novus Ordonarians love to make fun of the TLM such as our Gregorian chants, deep silence, fiddleback chasubles, lace, lots of bowing, kneeling, sign of the cross, altar boys only, modest dress code, and yet when the NO has a new bishop they have over the top music with trumpets and drums and a 100 piece symphony, 20 different ethnic groups with their own style, female and male cantors tossing their arms and hands all over the place, a bunch of prelates packing the altar, laughing, saying how wonderful and amazing the new bishop is, once again they are celebrating a man being the new bishop and always forget that they should be talking about Our Lord and Savior Jesus Christ, but alas that is the Novus Ordo for you. With the TLM you have the real deal, its only about Our Lord and not how Bishop "Mike" is so wonderful and pure. Im only telling it like it is and this is not being nefarious or nasty. Remember everyone here, the Novus Ordo only came about 50 years ago replacing a Mass that was 1500 years old!! If we were right then we are right now as the saying goes in Trad talk.