LIBERALISM OF THE ILK OF JESUITS, JAMES MARTIN TO NAME ONLY ONE, HAS TURNED THE CHURCH INTO A MARSHMALLOW THAT NOW WORSHIPS SECULAR LIBERALISM AND BOWS BEFORE IT AND KISSES THE FEET OF SEULAR RULERS 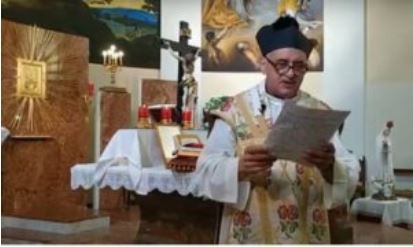 John Allen of Crux and formerly of the National Chismatic Reporter (NCR) is always fun to read. He has an especially good article that kind of dovetails with Fr. James Martin’s arrogant stupidity which some call clericalism. I pick a quote for you can read from the article. You can push the last words of this post for the complete article. I think it basically says it all. The recovery of the clericalism of the post-Vatican II, spirit of Vatican II dogmatism and authoritarianism, that marginalizes those who appreciate the ethos and thrust of the Catholic Church as a fortress or a unsinkable battleship, over the marshmallow it has become since Vatican II and becomes again under the hope-for recovery of the spirit of Vatican II of the 1970’s inspired by this Jesuit papacy:


In miniature, the situation in Palermo captures the broader tensions of the Francis papacy.
Ricotta, unsurprisingly, is a staunch traditionalist. Two days before his act of defiance over communion, he posted a video to Youtube, his title for which was: “An enflamed homily against heresy, apostasy and false ecumenism in the Church.” (While he delivered it, Ricotta wore the traditional priestly biretta.)
“Ecumenism has been one of the disasters of the past 60 post-conciliar years of catastrophe,” he said.
“For 2,000 years, the Church was an unsinkable battleship … we defeated the Roman Empire, Atilla the Hun, Hitler, Napoleon, the Soviet Union. Today, this battleship has become a paper tiger. All it took was a microorganism to sink it.”
Read the rest at Crux.

Does this excerpt not suggest, rather like the SSPX do, that the Vatican II doctrine on ecumenism is itself heretical?

Ecumenism is Modernism which priests had until after VII took an oath against. What’s left for the Anti-church to destroy? The ape of the church is in full swing these last 7 years which has allowed us pewsitters a perfect view that our parents in the 70’s did not see clearly until it was to late. They simply followed these godless shepherds right off the cliff.

No more.The Holy Ghost most definitely give us Jorge the son of Ambiguity even with the invalid election; 5th vote on that day and the invalid resignation of Benedict XVI who was clearly threatened into resignation.Minus versus Munus