HOLD YOUR HORSES, OUTDOOR MASSES IN SAINT PETER'S SQUARE HAVE PREISTS DISTRIBUTING HOLY COMMUNION TO THE PERIPHERIES BEFORE THE HOLY FATHER COMPLETES HIS COMMUNION AND THUS THE SACRIFICE

Priest and decons preparing to distribute Holy Communion with pre-consecrated Hosts to the throngs in Saint Peter's Square as a Mass celebrated by Pope Francis. I was among them and we distributed Holy Communion as the Our Father was chanted. 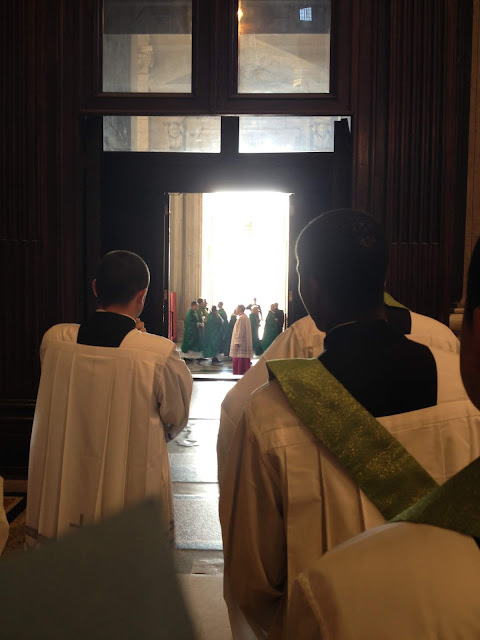 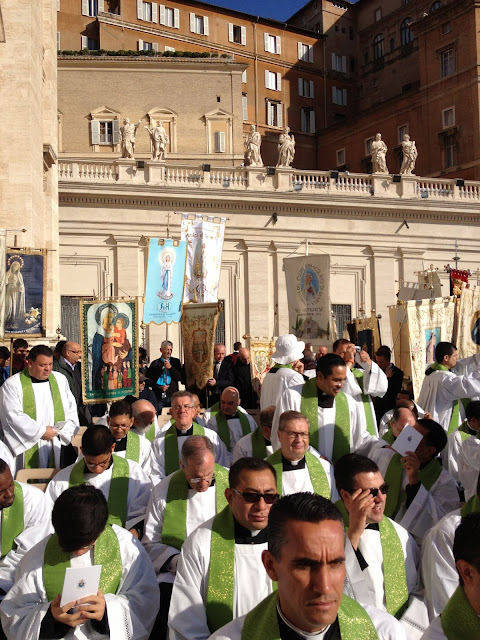 Rita Ferrone of Praywhine is apopletic that some bishops are putting forward pandemic guidelines about when and how to distribute Holy Communion. They recommend after Mass. As a disclaimer, I don't think that is necessary but I am not bent out of shape about it, because at least they are recommending distributing Holy Communion at Masses where the laity are invited to attend!

But in some of the comments on Rita's whine, one or two recall the distardly old day of the pre-Vatican II Mass when vocations were in abundance and 99% of Catholics bothered to attend Mass, that in their experience Holy Communion was distributed by priests who simply showed up to do so and during the praying of the Pater Noster before the celebrant completed his Holy Communion which competes the Sacrifice.

I don't recall that, but then again I only attended about four churches for Mass prior to Vatican II.

But those comments did help me to remember that at the outdoor Masses I distributed Holy Communion while on sabbaticals in Rome. I was in the section of priests by the right doors of the Basilica. As soon as the Eucharistic Prayer was begun by Pope Franics, yes Francis, the MC had all of us priest leave our places and to into the basilica. We were given a ciborium of consecrated hosts and lined up two by two in the center aisle of the basilica facing the entrance doors. As soon as the Great Amen was sung, we began to process out of the basilica and to our communion stations at the periphery of the Square. There were about 75 to 100 of us.

Thus at Pope Francis' Mass I was distributing Holy Communion from pre-consecrated Hosts while the Agnus Dei was being sung. This is a common practice at huge papal outdoor Masses.

I will also add, though, that I sat in a different section to the left of the outdoor papal altar (Gospel Side) and held a ciborium of unconsecrated hosts which the pope consecrated and I and about 100 other distributed at the correct time to those closer to the altar.

Indeed, priests "show up" during the Our Father to distribute Communion, which they do at the appropriate time after the celebrant receives and after the absolution. Usually, these priests come from the confessional where they've been hearing confessions, and they "show up" to distribute communion so that it goes faster.