TRADITIONALIST ARE TOLD TO SIT AT THE BACK OF THE BUS! 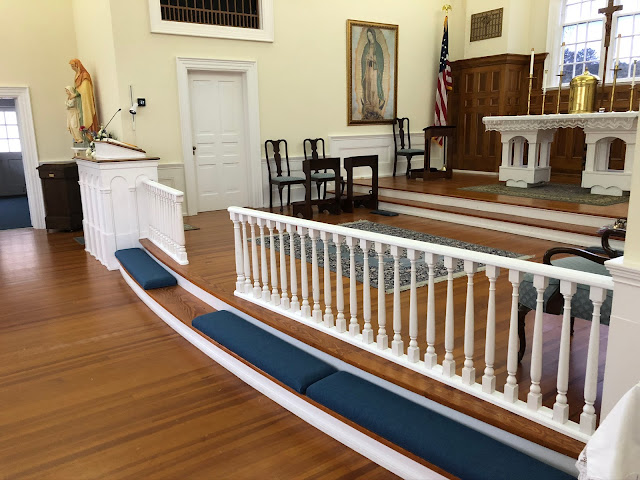 I am old enough to remember quite vividly segregation in the south. My mother didn't drive, so when we moved to Atlanta, 1956-60 and then to Augusta, we lived on a public bus line and went downtown at least weekly and more frequently during the summer on the bus. African Americans sat at the back of the bus and their seats were limited in terms of the "blacks only" sign that floated depending on the number of whites.

This is what a theologian says about the brouhaha that is developing concerning the USCCB's guidelines for Masses when churches open up which they are in Florida and South Carolina but not yet in Georgia.

Anne McGowan said that if she had drafted the Thomistic Institute's guidelines, she might have encouraged those wishing to receive on the tongue to place themselves among the last in the Communion line as a way of reducing the risk to others.

Tone deaf is Ms. McGowan. Maybe she doesn't know the history of being placed at the back of the bus in the south.

But I'll say it again. After Vatican II, to be labeled pre-Vatican II by progressives hell-bent on changing the Church despite having no evidence that Vatican II actually called for what they were doing except though some subjective, nebulous "spirit" talk, was the same as the "N" word directed toward African Americans. They were/are words of contempt and an attempt to marginalize and discredit those so labeled.

Bishops, bishops, bishops, experiment wth giving Holy Communion to kneeling communicants at the altar railing and spaced appropriately. Both on the hand or the tongue it is easier to avoid touching hands because the communicant isn't moving and usually stabilizes their arms on the railing as they prepare their hands to receive and for those receiving on the tongue, with the communicant kneeling and the priest reaching down this avoids hand to tongue contact.

You can read about the National Chismatic Reporter's (NCR) crocodile tears over the Thomistic Institute's guidelines which the USCCB is recommending but not mandating:

Bishop Stika of Knoxville issued an ultra vires order in his Diocese forbidding Holy Communion on the tongue. Since the USCCB states it is fine, so much for the liberal nonsense called "collegiality." If Stika wants Faithful Catholics to walk away, he could not have done it any better than this ham-handed order. He is a bully

This causes me exasperation. Why don’t the theologians simply ask the question to people who are knowledgeable in fair distribution of goods and services? If we are safe assuming that the the priest is not seeking to exclude anyone then he needs only to determine his personal capacity to provide Mass then create a blind schedule for access to the Masses. We have taken our eye off the ball to worry about the response of people to something we haven’t even done. If we create a fair system we can execute it with a clear conscience and help people learn it. Fairness will include evaluation of the process for effectiveness and subsequent adjustments.

Outside of New Orleans were there many problems in the State?

Although I don't consider myself an expert at giving Holy Communion by any means, I was an EMHC for over 25 years. I found that if I held the Host on the edge with the index finger on top and the thumb on the bottom, all I had to do was place the other edge on the person's tongue or hand and I never touched either. The only time I had an issue was when someone once tried to pluck the Host from my fingers and I quietly told the person that I had to give them the Host either on their tongue or their palm. They offered their palm. Another Sunday I noticed that same person pluck the Host from another EMHC's fingers and then dip it in the Communion Cup held by another EMHC, in effect, self-intinction. I assume someone reported that to the pastor and he privately counseled the person as they stopped doing that. When Communion in the Hand first came out decades ago, pastors did a demonstration of the proper way to reverently receive in the hand before the parish started the practice, but over the years people have gotten sloppy. Some (especially those holding infants) use one hand and plop the Host in their mouth like they're eating candy. Hardly reverent. Also, I've noticed from watching First Communicants that apparently they only teach kids how to receive Communion in the hand. Personally, I think the whole "Communion-in-the-hand" was a big mistake and contributed to the lack of belief in the True Presence.

JR- Not in my Parish. Purely by accident I happened to be in the Church whilst Father was preparing the First Communicants. After carefully explaining that it was OK to receive on the hand, he explained that it was much more respectful of Jesus to receive on the tongue. I doubt that most of those youngsters will forget that.