TRADITIONAL CONFESSIONALS AND THE COVID-19? NO PROBLEM! 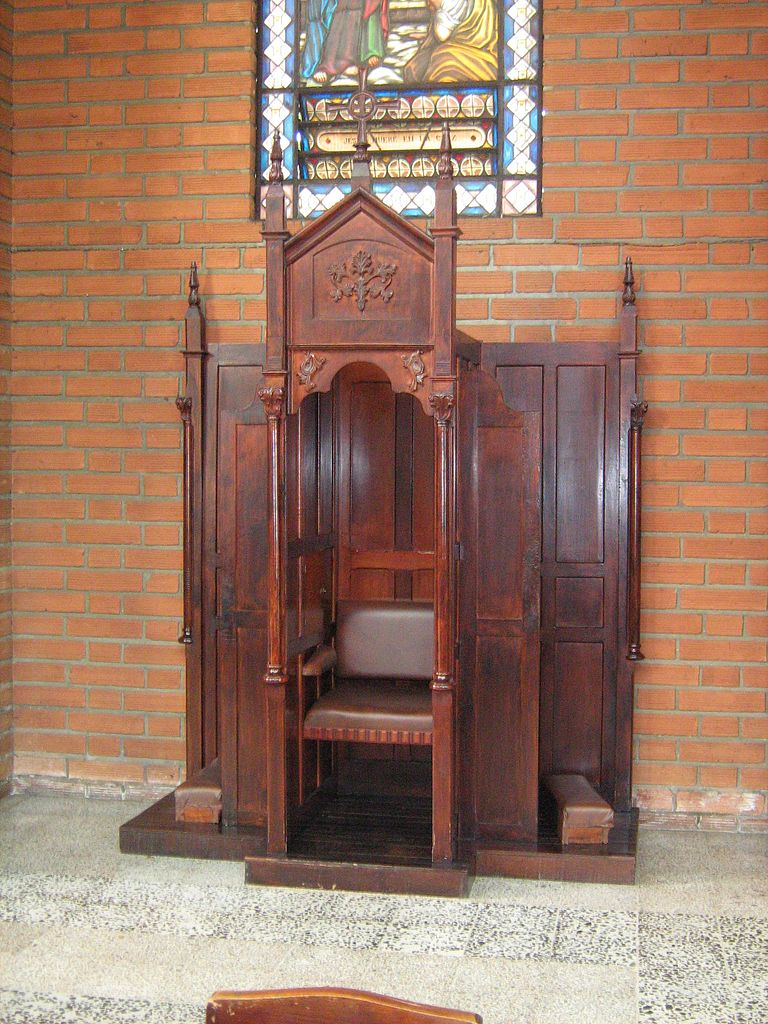 The photo above is the only one I can find that actually shows the sliding door of a two person confessional. By that I mean, the priest is in the center and two penitents enter (and at the same time as the other) the two sides and kneel and wait their turn for confession.

But, you ask, since you are too young to remember this norm for confessionals, how do you keep from hearing the other person's confession?????

That's a good question from a malformed young Catholic, not that it is your fault.

It was very important for you to listen to the other side's sliding door being closed by the priest and then your side being slid open by the priest to let you know it was time to Confess.

When I was a child, sometimes I couldn't distinguish which side was opening and closing, so at times I started my confession to a closed sliding door! Oh, well.

Now, the more modern version of the Confessional above, which I can't find a photo, would not be a piece of furniture as shown, but built into the wall of the church and normally toward the entrance of the church, but in the nave, not the vestibule or narthex. There would be doors or heavy curtains to keep others in line from hearing the penitent confess his sins.

The original church of my childhood parish in Augusta, St. Joseph the Worker, was a 1950's A-frame building. There were two confessionals opposite each other. Originally, they had very heavy burgundy drapes instead of doors, which I hated as I was paranoid those outside, like my parents and siblings waiting to go, could hear me.

In answer to my prayers, doors were eventually added. I loved those doors.

In addition to the sliding doors, there was a white cloth placed over the screen which looked like a corporal cloth. This helped in maintaining anonymity and also from spreading germs either from the priest to you or you to the priest. It was like the coronavirus masks we are all wearing now.

Thus, in this set up, the traditional confessional with a separate enclosed space for priest and penitents and the cloth over the screen with sliding doors that open and close, germs in an epidemic and a pandemic could be nipped in the bud.

We have four such booths in our church. There is an LED above the doors of the confessionals that lights green for open, red for occupied. While I kneel on the narrow plank it is dark until the priest opens the sliding curtain and the curtain is illuminated. The priest blesses the moment and asks for my confession. The act of contrition is taped to the bottom of the window so that light comes under the screen that I may see it, if needed. I confess in a low voice and the priest is close to the screen so he hears me clearly.

Before Easter I scheduled confession and met the priest in the sacristry where a screen was erected between his chair and my kneeler, six feet away. I like the dark booth but, after all, my shepherd knows my voice, too, so this was perfectly acceptable to me.

We had kneeler-activated red/green lights on the confessionals at Blessed Sacrament. If you positioned yourself carefully close to the edge, you could make the light flash red-green-red-green-red-green with a very slight adjustment in posture...

The marble (!) confessionals in the Basilica of Saint Mary in Minneapolis are very small. The door for the penitent is about a foot off the floor because, when kneeling, your lower legs protrude out of the box!

And the "slide" in those confessionals is a round disc of wood on a heavy wooden dowel. The priest moves them back and forth like a pendulum, to open and close the window to the penitent.

Fr I know what you mean about the "curtain", this is the confessional that i was brought up with,

still there, sadly just storage, a "reconciliation room" was created from the old baptistry and the font was moved to the sanctuary. talk about disordered
As an aside I always wondered how Fr Stock, God Bless His Soul, kept warm in there in the winter, I looked a few years ago, there is a small cast iron hot water rad in there, Fr straddled it when seated and draped his cassock over it depending on how cold it was

Going into a phone booth which a ChiCom flu carrier just exited is a wonderful way to infect those who follow without fwil,...

and a priest catching it from both sides as airflow shifts from side to side as panels and doors open and close and who will get near zero protection from cloth which would only catch 40% of virus sized particles on a good day.

Picture how effective whatever filter/block you envision would be in a house fire from smoke inhalation, and you have a good idea of how wonderful it works on most any virus.

I thought under Canon Law, people are supposed to always have the option to confess behind a screen. When I was a kid in parochial school, there were several priests hearing confessions when we went over to the church class by class. Because of large numbers, they used portable confessionals which are like a prie-dieu with a screen attached to the top. The priest would sit in a regular chair on the other side. Of course they still have confessionals and more so "reconciliation rooms" that have screens, but if you go to a penance service, you're out of luck.

When I was young, our confessional booth had a phone for the hearing impaired (actually an intercom between the two). I am fortunate enough to have such a device at my parish and have been using it throughout the pandemic. Virus cannot be transmitted through a wire! No screen or sliding doors needed.