The Diocese of Savannah College of Consulters just elected the Administrator for the Diocese until a new bishop is named by Pope Francis. He is my former parishioner and altar boy at the Church of the Most Holy Trinity in Augusta where I was pastor from 1991 - 2004 and my first parochial vicar for two years at St. Joseph Church in Macon in 2004-06. It is Father Dan Firmin, Vicar General for the Diocese and pastor of St. James the Less in Savannah. The photo below was taken in 1999 I think and in Vienna, Austria. All three guys were my parishioners at Most Holy Trinity and all  laymen at the time. Going clockwise from me is Fr. Dan Firmin, Fr. Mark Van Alstine and Fr. Aaron Pidell, SJ. Then, Mark Van Alstine and I were on our way back visiting our sister parish in Tbilisi in the Republic of Georgia with a layover in Vienna. Dan Firmin and Aaron Pidel were on a “study abroad” with Franciscan University in Steubenville. 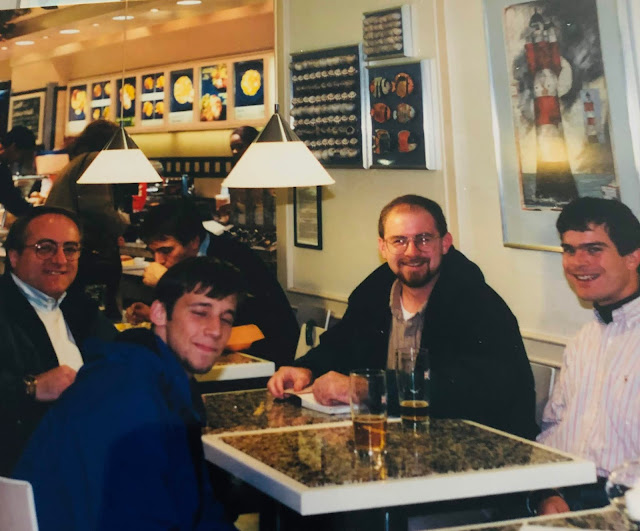 Yesterday on Facebook Fr. Dan, when asked about this possibility, said he would rather “Let me be just a simple parish priest.”. Not to be. Far too talented a guy who has risen to every challenge. He will do a great job and we are all fortunate to have him. You did a good deed mentoring him FRAJM!

Father, you will never have a better chance than now to get that parish priestly limo, and you need to strike while the iron is hot.

Am very happy for you folk to get a good man as Administrator. I wonder whom cardinal Blasè will ordain be chosen?....my guess would be somebody from Chicago or New Jersey.

This will be very interesting to watch. I don’t mean to make you paranoid, but I bet you are a topic of discussion for the man who gets the assignment.

Thanks RCG, but I have a far too wide swath of a paper trail or blog trail that that would ever happen.

Father McDonald is too orthodox.

Should be 'habemus administratorem'. Latin nouns ending in -or are 3rd declension.