IF A LAYMAN MAY NOT RECEIVE HOLY COMMUNION AT MASS IS IT WORTH ATTENDING MASS? THE ANSWER IS A THREE LETTER WORD FOUND IN THE BALTIMORE CATECHISM: YES!

In my mine this is a meal: 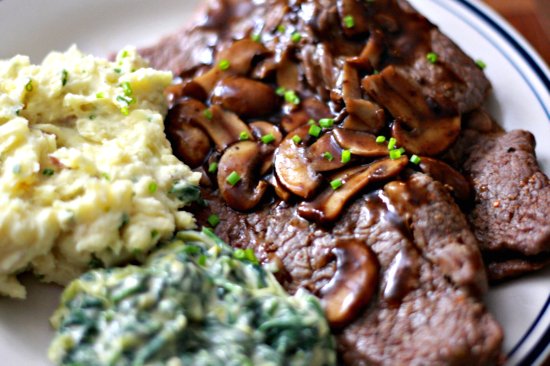 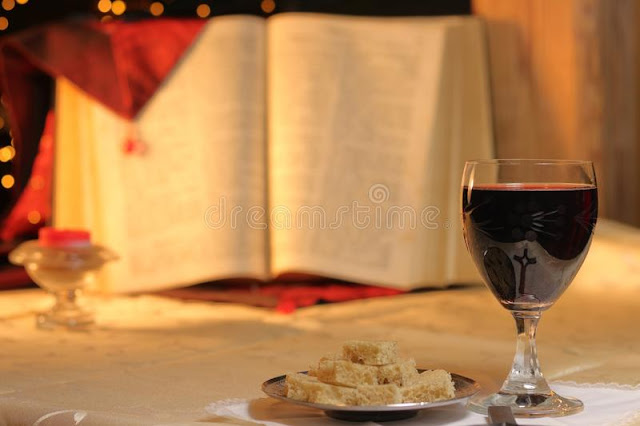 Because the heterodox promote the heretical notion that “the Eucharist” is a “resurrection meal” sans “the Holy Sacrifice” which the priest concludes by consuming the Holocaust, many laity see no point in attending Mass if they can’t “eat and drink” Holy Communion even if they broke the fast or are in a state of mortal sin.

If the laity can’t receive because of the hysteria of spreading COVI-19, why not offer Benediction of the Most Blessed Sacrament after the Post Communion Prayer in lieu of the Final Blessing? That has not been on the radar screen of any bishops, although Pope Francis did so at his live streamed Masses! I offer a “Benediction” at Communion time to my on line audience as is done when offering Holy Communion at the EF Mass.

I used these two photos On my parish Facebook page along with the essay that follows of Pope Francis modeling the way forward for liturgical renewal in the COVID-19 age which emphasizes the Holy Sacrifice not that Resurrection Meal: 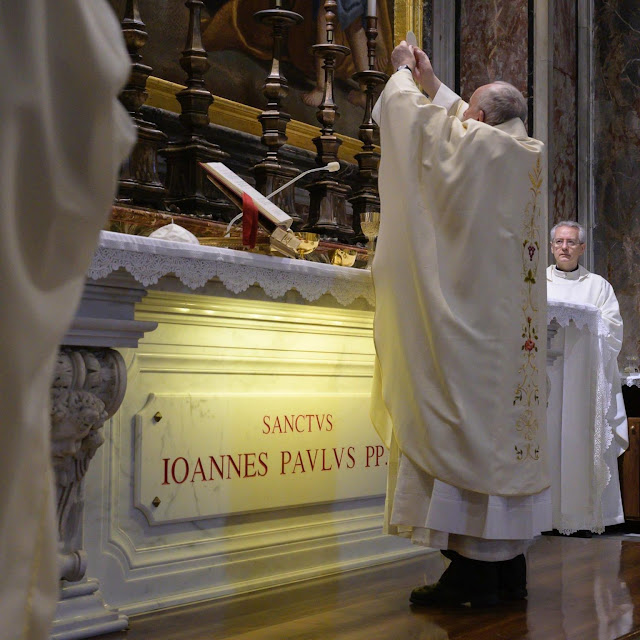 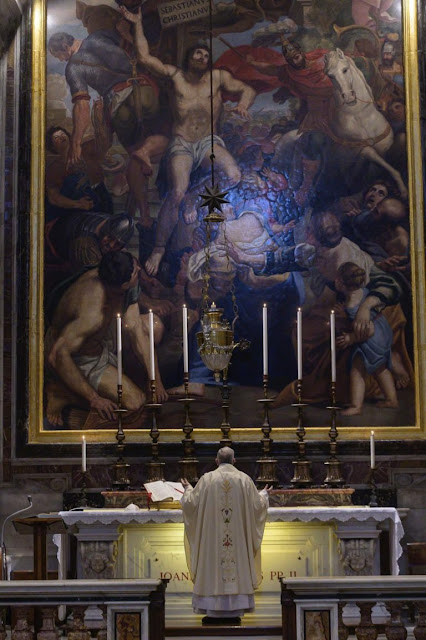 Monday was the 100th birthday of Pope St. John Paul II. Pope Francis celebrated Mass "ad orientem" at the altar where the saint is entombed. Ad Orientem was the norm for the Mass until about 1966 when the reform of the Mass allowed the priest to face the congregation. Ad Orientem means "towards the East". In Catholic parlance it could mean the geographical east or facing the altar and crucifix as Pope Francis did on Monday. Symbolically it means facing Jerusalem and Golgotha where Jesus was crucified and rose from the dead. Symbolically it means facing the direction of the rising sun. It is also a symbol of facing the east from whence Jesus will return at the Second Coming and Final Judgement. It also configures the priest and the laity facing the same direction toward the Lord. It also makes clear that the Mass is an "unbloody" reenactment of the One Sacrifice of Christ on Good Friday, not a reenactment of Holy Thursday's Last Supper. At Mass we are at the Glorified Passion, Death and Resurrection of Christ, not at the Last Supper. Jesus established the Mass at the Last Supper on Holy Thursday not to remember it, but to remember Good Friday and Easter Sunday. Pope Benedict requested priests to place a crucifix on the altar facing the priest when the priest celebrates Mass facing the congregation and not to gesture to the congregation at the words "take this all of you..." as though the Eucharistic Prayer is a reenactment of the Last Supper and the congregation represents the 12 apostles. That isn't what the Mass is. In the Martha and Mary Chapel, we have recovered the Church's oldest liturgical tradition of the priest facing the liturgical east and joining the congregation in facing the same direction in liturgical prayer.
Posted by Fr. Allan J. McDonald at Wednesday, May 20, 2020

In my mine, I don't eat food since it is underground and dirty.

Interesting. What do you eat? Cows, pigs, chickens and other mammals and birds are underground and dirty?????? I can see not eating vegetables since they are partly underground, not to mention potatoes and other roots. And it makes sense that you wouldn't eat eggs, not because they are from underground but from whence they are dispensed. So you can't be a vegan, but you could eat cheese, but we know where milk is dispensed and not might not suit you. So I ask again, what do you eat?

Nice attempt at a dodge, there, Padre. (Yes, a Dodge, not a Chrysler.)

Probably not healthy for you to eat in mines at all...

Where I grew up, the workers ate lunch in the mine every day.

was it underground food or above ground food they ate? My Nigerian PV likes roots, not just potatoes, but all kinds of roots that they cook similarly to potatoes over there. Some of them are huge roots to boot.

Some of my relatives at their lunches in the mines everyday as well. There wasn't a choice.

I remember in my youth, at the transition to Vatican 2, Benedict was frequently part of the Mass. I have to think that the benediction I remember was from the TLM and not the newfangled one. I also had thought a benediction as a substitute for people receiving communion in this time of COVID-19. If one looses their sense of sight, often the auditory and tactile and olfactory senses are enhanced. Regarding that meal you have pictured. Fr.Z also had a meal of a nice roast on his site. Of the roots he said the people ate all the potatoes but not the carrots. I looked at the photos and thought that looks like a nice meal, but where’s the whine? You can’t have a meal without a little whine. That’s enough rib-eye for know.

I recently thought that possibly some who follow this blog may be interested in what I have recently read:

"....Finally, a word about liturgy. It is natural to the Germans to make a row. The torchlit, vociferous assemblies of the Hitler Youth expressed a national passion. It is well that this should be canalised into the life of the Church. But it is essentially un-English......We seek no " Sieg Heils". We pray in silence. "Participation" in the Mass does not mean hearing our own voices. It means God hearing our voices. Only He knows who is participating at Mass. I believe, to compare small things with great, that I "participate" in a work of art when I study it and love it silently. No need to shout.

.....As the service preceded in its familiar way I wondered how many of us wanted to see any change. The church is rather dark. The priest stood rather far away. His voice was not clear and the language he spoke was not that of everyday use. This was the Mass for whose restoration the Elizabethan martyrs had gone to the scaffold. St Augustine, St Thomas a Becket, St Thomas More, Challoner and Newman would have been perfectly at their ease among us.....
.....In most of the historic Churches the act of consecration takes place behind curtains or doors. The idea of crowding round the priest and watching all he does is quite alien there...awe is the natural predisposition to prayer. When young theologians talk of Holy Communion as a "social meal" they find little response in the hearts and minds of their less sophisticated brothers."

"His dislike of the reform movement was not merely an expression of his conservatism, nor of his aesthetic preferences. It was based on deeper things. He believed that in its long history the Church had developed a liturgy which enabled an ordinary, sensual man (as opposed to a saint who is outside generalization) to approach God and be aware of sanctity and the divine. To abolish all this for the sake of up-to-dateness seemed to him not only silly but dangerous.....'untune that string', he felt, and loss of faith would follow.

Pope Benedict mentioned something about why the priests back is to the people, and he mentioned that it had something to do with where "east' was in relation to the altar at St. Peters. I wish I could remember the source, I think it was from one of his books. I have to think that in the ancient church liturgical east was true east. In the morning the rising sun would have illuminated the church during morning mass. That was a time when the liturgy (of the hours) was prayed according to a rising and setting of the sun and not a clock. also, spellcheckers get everyone !

In ancient and modern times, East is East and too many ancient references to the direction and why we face East to begin to list....however, numerous times both near and remote, other things have come into play which have dictated that an altar not able to be located at the east end of a church,..

whether that be ignorance, geography of the terrain, or shape and orientation of a lot in a large city. Of late, it mainly has been often only outright dismissal of the entire concept where landscaping concerns or public presentation of the prettier end of the church towards a road have trumped any thoughts of liturgy.

And that latter concern often a farce of someone deciding which end of their building styled after, and indistinguishable from, a modern county jail, was the most attractive.

I still remember an online competition where site visitors were asked to guess if a photo showed a church or a prison, and how few were able to get more than half the answers correct.

It was the architectural version of a written test covering all the kings of ancient Israel, and needing to say if they were a good king or a bad king, where if them all labeled bad, you were sure to pass the test.

As for what folk eat or drink, a friend asked if I had a beer in the fridge, and I apologized for lack of the same and offered a glass of cold water in the summer heat.

His reply was that he never touched the stuff as anything which rotted wood and rusted iron could NOT be good for you.

When looking at Germany’s influences in drafting Vatican 2, one should look at the Lebensreform movement that was before WW2. Today is Ascension Thursday , though my phone breviary only lists it as an ordinary Thursday of the sixth week of Easter. I should have looked at my Saint Josephs Guide. Sigh. I will be glad when churches open up again.

And in that image of leavened bread and wine in a glass glass.... That's a light meal, not a sacrament.

As a lay Catholic, it has always seemed to me that Mass celebrated "facing the people" was "disoriented." And, since the Mass is the "source and summit of the Christian life," it would seem that having the priest and the people in what I think is the correct order (ad orientem) during the celebration of the "source and summit" of their lives, would be the first and most important thing we could do (followed by who serves at the altar).

I have seen ad orientem (re-)introduced in parishes in other dioceses using the ordinary form by simply offering it at one of the Sunday morning Masses, and it was quite successful. I hope that we will soon see Sunday Masses in the ordinary form regularly celebrated ad orientem in the Savannah area.