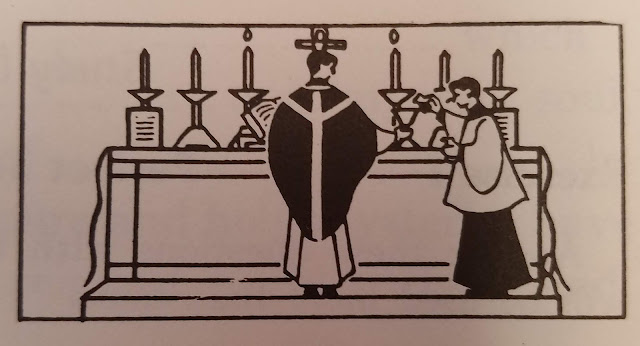 You can read the complete heretical/hysterical whine HERE:


Here is but one quote from it with my astute comments below it:

My comments: For the most part, Pope Francis' field hospital during the pandemic has gone AWOL or missing in action.

Because of the reformed post-Vatican II Mass which moved the "Liturgy of the Word" from the table of the altar where the "sacrifice" of God's Word made Flesh takes place, to a podium or ambo, isn't it nonsensical to call the podium the "table of the 'Liturgical' proclamation of the Word?"  And traditionally, isn't there a sacrificial aspect of proclaiming Jesus, who is God's Word Incarnate, to God in a sacrificial way???????

And then Hass uses the diluted term for the consuming the Holocaust, "the resurrection meal of the Eucharist." Wouldn't the Sacrificial Banquet of the Rite of Holy Communion be better and emphasize the importance of the Paschal Sacrifice which encompasses the passion, death, resurrection, ascension and outpouring of the Holy Spirit?

And is it true that sinners who do not see Jesus' in the world, really will not find Jesus in the "table of the Eucharist?" Isn't that heretical? Isn't He there whether they find Him or not?

And what about the poor souls who cannot "come to the table of the resurrection meal of the Eucharist" are they out in the cold if they "only" participate in the Canon of the Mass which at its heart is the Sacrifice in a glorified way????? Is that useless to Haas or non existent. Is his idea of the Mass just a "resurrection Meal????"

What the pandemic has done and Haas has articulated is how superficial, air headed and nonsensical, touchy-feely the post-Vatican II ideologies about the Mass are which spring from the progressive/heretical/heterodox in the Church or her fringes.
Posted by Fr. Allan J. McDonald at Friday, May 15, 2020

Gee, d’ya think the main reason these 60’s-70’s hippie, liberal progressive types are worried about re-opening our parish churches, and the potential infections to be had therein, is rooted in the fact that THEY are the “older folks” who might be at greater risk, and if they were suddenly felled, en masse, by this illness, there would only be young, healthy, resilient Catholics, both lay and clerical, remaining to run the show, and since “younger Catholics” increasingly means conservative, traditional-minded, anti-“spirit of Vatican II”, the absence of the “seniors” would mean that whole generational program would rapidly vanish from the scene, replaced by good ol’ fashioned CATHOLICISM, especially in the area of liturgy and sacred music?

It seems to me Leftists are so predictable. If the political Left has some agenda, the Leftists in the Church find a way to argue why the Church should follow that agenda.
Funny how David Haas can twist himself into a pretzel arguing why the state's agenda is more important than the Church's, which is the salvation of souls via the sacraments.

The Novus Ordo added the following to the Ecce Agnus Dei: 'Beati qui ad cenam Agni vocati sunt.' This is of course taken from Revelations 19:9 and refers to the wedding feast of the Lamb in heaven. However, for some reason the word 'nuptiarum' was omitted and the English version in use for over forty years was even less specific - 'Happy are those who are called to his supper.'

Moreover, since the Mass is also referred to (GIRM 27) as the 'Lord's Supper' many (if not most) got the impression that they were being called to a re-enactment of the Last Supper, with the congregation taking the part of the disciples in the Upper Room. A lot of priests apparently thought this too, addressing the words of Institution directly to the people, and gesturing with the Elements to reinforce the meaning.

As for the term 'resurrection meal' it's simply another example of post-V2 newspeak, and like so much of that genre is tossed out with little in the way of expansion or explanation. I wouldn't say it's overtly heretical. Fr Kenan Osborne OFM, whom David Haas quotes, was a progressive theologian and pupil of Karl Rahner and Hans Küng. He also admired Joseph Ratzinger in his Tübingen days but concedes that Ratzinger's theology has since changed.

He might be controversial, but speculative theology usually is. I suspect that his views on lay ministry have developed traction in certain circles. A clever man, but I am not competent to pronounce on his orthodoxy or otherwise. I'll leave that to the CDF.

I can’t say I was aware of either the sacrificial or meal aspects of the Mass prior to and at the changes in the Mass in 1965/66. I do recall, as the Mass went from ad orientem to facing the nave and the Canon from Low voice Latin to expressively loud English feeling as though I was at the Last Supper.

Prior to the changes as a kid my childlike belief was that we worshipped God in a ritual way and God was present especially in the bread and wine consecrated at Mass. for me the apex of the Mass at that time were the two elevations and double genuflections with the bells wrong multiple times,

You and I are of the same vintage. When I was a boy in Catholic grade school, the Sisters (who certainly appeared to be very orthodox in those days) spoke incessantly about the Holy Sacrifice of the Mass. Post Vatican Disaster II, they no longer used those words. Although not expressly, but for the reasons you state, it become grounded in many that we were attending a re-enactment of the Last Supper. Our parish church even had an "Upper Room" where Masses were celebrated during the week.

Beware David Haas. He is a gifted musician, but he has some screwy, non-Catholic ideals that are not compatible with our Faith. He has repeatedly tried to infiltrate the Secular Franciscan Order with his own "order", which he created and apparently has adherents throughout the country. It is made up of people of many different religions, many of which have teachings that are incompatible and in defiance of Catholic teaching. As a matter of fact, I do not believe he is even Catholic. His "Franciscan order" has its own FB page, and promotes such ideas as married clergy, homosexual "marriage", etc.

Oh, my goodness. This is the same David Haas of the terrible music? I thought Marty Hagen had him arrested for plagiarism.

Well, nothing unexpected from Mr. Haas. For all the talk of the 'new norm', Mr. Haas is living proof that the old norm - i.e., religion-lite - stubbornly persists... like athlete's foot. Myself, I prefer the new old norm. That is, the Ordinariate Mass and the patrimonial sanities which accompany it. Of course, the Latin Mass is superbly fine, too!

If we're going to be properly Catholic, it's Apocalypsis B Joannis Apostoli 19:9.

No, as a proper Catholic, it is REVELATION, not REVELATIONS.

My comment on Haugen, Haas and their ilk... I expressed years ago to my confessor that I found it impossible during those modern ditties to form any mental prayer. Except perhaps for an end to the ditties.

Wit a clear conscience, I can say with certainty that I would not turn to Mr. Haas for meaningful views on the Church and its practices.