IS GOD BRING GOOD OUT OF THE COVID-19 PANEDMIC BY BRINGING ABOUT LITURIGICAL RENEWAL AND RESTORATION? 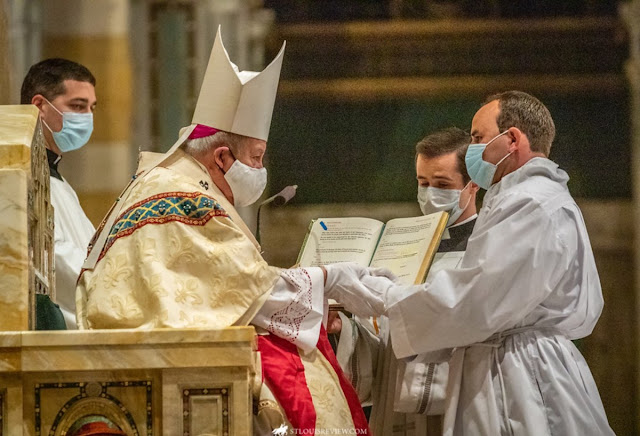 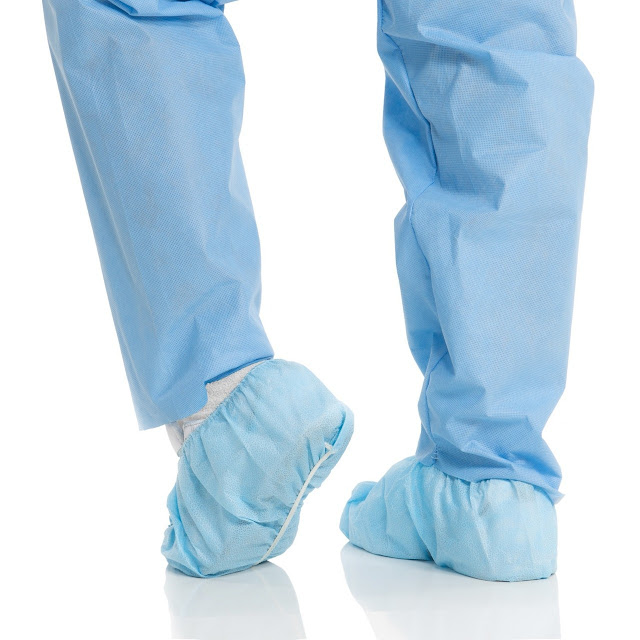 The Bishop of St. Louis is seen wearing liturgical gloves and perhaps buskins so as not to contaminate the floor of the sacred cathedral where he presides. Liturgical masks are a liturgical novelty but an organic development of their use will add a religious symbolism to it. I wonder what that might be?

God is bringing about authentic liturgical renewal and restoration with some novelties such as masks. I predict the maniple will make a comeback as a kind of handkerchief. O, wait, it has made a comeback with the EF Mass (and truth be told, I have worn it on occasion at OF Masses).

So, in a span of two months, this is what the COVID-19 pandemic has done for liturgical renewal:

2. The Handshake, Hug, Kissing, of Peace has been eliminated (Vatican II asked for noble simplicity and sobriety in the Mass).

3. The Pandemic causing common chalice has been eliminated for obvious reasons Vatican II taught noble simplicity was important at the Communion Rite and the Body, Blood, Soul and Divinity of the Risen, Gorifiied Lord is fully present (intact) under the form of the Host alone

4. No holding hands at the Lord's Prayer as the Mass, as Vatican II taught, is not a contact sport.

Things the Lord has planned for further Liturgical Renewal:

1. The elimination of the Universal Prayer (one post-Vatican II Cardinal says Vatican II called these, "those boring things).

2. The Roman Canon mandated for all Masses because it include the Universal Prayer within it, as Vatican II taught.

3. Kneeling for Holy Communion and at the altar railing because Vatican II taught that it is easier and faster to distribute Holy Communion this way, noble simplicity demands few Euharistiic Ministers, and finger-to tongue contact is absent due to the posture of the communicant.

4. Ad orientem is restored because Vatican II taught that prayer is directed to God, the Mass is a Sacrifice not a reenactment of the Last Supper and there is nothing to see that can't be seen at the high elevations and people can know where the priest is by the sound of ringing bells.

6. The Prayers at the Foot of the Altar will be restored because Vatican II taught that the virus of sin as bad as the coronavirus needs the vaccine of lengthy pentitential prayers prior to the actual celebration of the Mass.

7. Vatican II taught that the Mass should not be too wordy as aerosolized speech not only is boring but spreads pandemics. The Mass should be in Latin, quietly prayed, becasue as Vatican II taught, God understands Latin since prayer is directed to Him and not the congregation and He can hear what mere mortal man cannot. He sees too, what men can't see.
Posted by Fr. Allan J. McDonald at Monday, May 18, 2020

From your lips to God's ear!

From Wikipedia: The current view is that Revelation was composed in the context of a conflict within the Christian community of Asia Minor over whether to engage with, or withdraw from, the far larger non-Christian community: Revelation chastises those Christians who wanted to reach an accommodation with the Roman cult of empire.[This is not to say that Christians in Roman Asia were not suffering, for withdrawal from, and defiance against, the wider Roman society, which imposed very real penalties; Revelation offered a victory over this reality by offering an apocalyptic hope: in the words of professor Adela Yarbro Collins "What ought to be was experienced as a present reality.”

Are all of these current arguments I have been reading across the blogosphere today’s version of that apocalyptic message? I am referring to the Traditional Latin Mass and it’s culture versus the Vatican Two Mass and the modern culture.

God can and sometimes does work miracles, but there is nothing to suggest that this illness is miraculous. It is natural in origin and (compared with historical outbreaks of smallpox or tuberculosis -- or in the town where I was born, yellow fever in the 1840's) of relatively small consequence in its public health effects. Its spiritual effects depend on how we react to it, and it is premature to celebrate widespread sanctity. As for its liturgical effects ... maybe it is not quite blasphemy to suggest that God sent a disease to kill more than 300,000 people, mostly without the sacrament of Confession just so that Latin-rite priests could dress in fancier clothes. Just maybe; but then you can no longer chastise someone for being flippant and shallow if he thinks God miraculously arranged for Ed Orgeron to become the coach at LSU because their national championship was important to a divine plan.

Don't you suppose God understands ALL languages, not only Latin?

Anonymous Anonymous said...
Don't you suppose God understands ALL languages, not only Latin?

My opinion: The Universal Church should make better use of its universal language as a means of unifying the peoples. In my diocese, Mass is offered in dozens of languages which, given the number of annual ordinations vs. retirements/passings, doesn't seem sustainable. Everyone might have to give a little to relearn the common parts of the mass. I don't think the overhead there is so great that this would be unachievable. As for the remainder of the points, Ad Orientem particularly, one can only hope. Taking the sign of peace one step farther, hopefully, it won't degenerate into bobble-head nodding a people - so useless. The Universal Prayer, as currently approached is repetitive/boring/tedious. If it were to be approached as is done in the Eastern Churches, it is call/refrain - and it moves along. Last, the Offertory Procession is purely symbolic (as the gifts are brought from the sacristy, not the people), has that silly exchange when the mostly unwilling participants get to the edge of the sanctuary and will hopefully be put out of its misery. I used to try to get people to participate in this during my Roman days and more than one angrily told me to either stop bothering them or to never ask again. Just end it already - the only person in the Church who really wants it is senior priest Fr. Kumbaya with the goofy grin.

Re: Anonymous Anonymous. I'll add one more thing in defense of Latin: Any idea can, I suppose, be expressed in any language, but in some languages may be more precise or more poetic (or both) for a given idea. This depends in no small part on the history of the language; in the First Century, neither Greek nor Latin had an appropriate vocabulary for subtle Christian ideas, but now they definitely do. English is slightly less optimal, and languages developed in cultures that have only recently encountered Christianity will generally have a poor vocabulary for Christian ideas.

Something analogous happens with computer languages. I suppose it is possible to simulate the collision of two galaxies using COBOL instead of FORTRAN, but no sane person would try to do that.

If I had to choose the two possible pandemic-related changes that might be made that would have the longest-term positive effect in the celebration of Mass, they would be: 1. to celebrate Mass ad orientem; and, 2. to eliminate the exchange of the Peace between the people. Both of these changes would "re-orient" the focus during Mass toward the Lord for both the priest and the people.