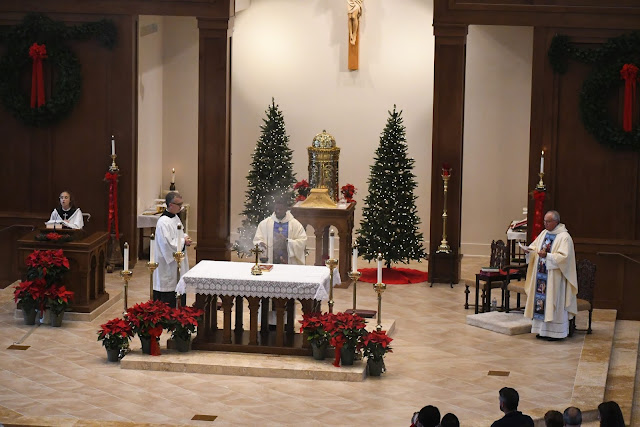 An article on the EF Mass versus the Reform of the Reform Mass makes this very true statement:

...Younger Catholics can be forgiven for cohabiting, using contraception, abusing drugs, experimenting in New Age practices, and believing only select Church teachings or none at all…but — the inevitable but — for Heaven’s sake, they must not believe that the traditional Latin Mass is a sensible and faithful form of worship in our enlightened post-conciliar age. Rather, despite contrary evidence, it must be held that the old Mass was once, and therefore will continue to be, a drudgery — rigid, infertile, and medieval.

With that truism stated, my own desire for the Liturgies of the Church is that all that are allowed are allowed without mockery or hindrance. By allowed, I mean what is allowed by each Missal’s General Instruction and rubrics. I am not talking about poorly celebrated Masses with inappropriate hymns or styles of music or casual, make it up as you go, liturgies.

I am very much into the reform of the reform which for me means the following listed in the order of what I think is the most important:

1. Kneeling for Holy Communion at an altar railing

2. Doing the red and reading the black

3. A greater vigilance over appropriate chant/hymns/anthems in terms of styles of music and orthodox lyrics. Most importantly, orthodox religious words should not be sung to secular styles of music like Broadway show tunes, rap, hard rock or folk.

4. Appropriate dress for altar servers, lectors and Extraordinary Ministers of Holy Communion meaning liturgical garments be it cassock and surpluses or simply an alb

As it concerns the EF Mass, Summorum Pontificum should be followed to the letter of the law and the laity’s rights established by Pope Benedict must be respected by pastors even when they disagree with this form of the Mass which includes the allowance of Nuptial Masses and Requiems in this form.

With that said, my own experience with the EF Mass is that it is a “boutique Mass” meaning it appeals only to a very small minority of Catholics in any particular diocese. The Mass that needs bishops and priests attention is the Ordinary Form of the Mass and a renewal in continuity that Pope Benedict so much desired for it. It is the Ordinary Form of the Mass that needs renewal and much more so than an elite group of liturgists in the first half of the 20th Century thought the Tridentine Mass at the time needed.
Posted by Fr. Allan J. McDonald at Saturday, January 04, 2020

Which "Broadway show tunes" do you have in mind?

"On the Street Where you Live" from My Fair Lady?

"Maria" from West Side Story?

"Season of Love" from Rent?

"One Day More" from Les Miserables?

"Some Enchanted Evening" from South Pacific?

There's no "Broadway Show Tune" as such. The lyrics, styles of music, number of singers all vary a great deal.

Some have full orchestras, some just a harp, some a piano, some a small combo of brass instruments or strings. Some are sung a capella.

I don't think you know much about Broadway Show Tunes...

You certainly need to read this Crux article:

It would be interesting to hear what reaction people have to the use of the single species for communion. I knew a fellow who declared that he would leave the Church if he was forced to commune only with intinctured bread. That parish had a lot of Methodists in it who were driving many of the very activities your list wants change.

As far as Broadway Show Tunes: none of that genre are suitable for Mass so all of the music on that list would be proscribed.

Anonymous 'Paul' accuses: "I don't think you know much about Broadway Show Tunes..."

For a man 'Paul,' I think this is considered a GOOD thing.

I doubt that the reformed Mass can be salvaged by tinkering. It is and always will be a product of the 60s, a product of secularized culture that is currently transitioning under the influence of gender ideology further away from worshiping the Trinity: to ambiguity, syncretism, and possibly idol worship e.g Pachamama as the logical conclusion.

Christianity lived simply and in the spirit of the Father Son and the Holy Ghost is counter cultural. The EF liturgy is the servant of Tradition. It expresses the teaching of Jesus Christ because it is guided by the theology of the Fathers who were closest in spirit and time to Jesus. The NO is a child of recent times, a captive of secular culture, a slave to it. It was artificially constructed, inspired by theologians who no longer fully shared the understanding of sacred worship with the likes of those at the Council of Trent or even with the latter reforms before V 2.

The EF Mass may have needed reforming by the 20th century. However, the NO has turned out to be a failed effort. Instead of evangelizing our culture, it accommodates its secularist, anti-Catholic ideologies. Sounds like we have been colonized, no?

Well, to which of the very, very different "Broadway Show Tunes" are you referring?

Might it be the plaintive, pleading, prayerful "Bring Him Home" from Les Miserables which begins"

God on high
Hear my prayer
In my need
You have always been there...

Is it the moving "Something Wonderful" from The King and I"? Poor Lady Thian tries to find the goodness hidden deeply in her husband, the King.

Is the objectionable "tune" "Send In the Clowns" from A Little Night Music, a song and a tune that are touching and reflective?

You see, there's no such thing as a "Broadway Show Tune."

You certainly need to learn a great deal more about Broadway and its music.

You keep digging you hole deeper and deeper. I heard Edelweiss sung a parish Masses in the 70's but with the religious word Alleluia inserted instead of the original words and in a mantra like form. Yes Edelweiss melody would go against Vatican principles all the way back to Pope Pius X. In his day, the concern was more with secular concert pieces that used the Mass as a performance not as an actual Mass actually being dragged into some Masses at the time, especially in Vienna. Religious words inserted into secular melodies for entertainment purposes.

Perhaps you suffer from literalism and cannot distinguish the term "Broadway melodies" as a generic and symbolic description of music that is condemned by the Magisterium and yes using religious words, even Biblical words to the melody of "Send in the Clowns" is anathema according to Vatican music regulations.

You really don't seem to get it, or you love progressive ideologies because they are elitist academic glossolalia and you wish to fancy yourself one of those.

Edelweiss is a lovely tune, but not one, I would suggest, that lends itself to being used for hymnody.

New melodies are not condemned by the Magisterium. In fact, they are anticipated. "New melodies to be used by the priests and ministers must be approved by the competent territorial authority." (Musicam scaram no 57)

Whether a melody is "worthy" for use in Sacred Liturgy may be difficult to determine. Who is expected to sing the melody? The priest or deacon or choir? Is a melody with a very broad range fitting for a congregation to sing?

I would suggest there are numerous "new" melodies that are entirely worthy of the Church's musical heritage, melodies that encourage reflection on the meaning of the texts being sung, and that are memorable and beautiful as well.

The instruction 'Musicam Sacram' was issued in March 1967 and can be assumed to have remained in force, since it has not been superseded or replaced. Paragraph 9 states that 'No kind of sacred music is prohibited from liturgical actions by the Church, as long as it corresponds to the spirit of the liturgical celebration itself and the nature of its individual parts, and does not hinder the active participation of the people.'

As to what constitutes sacred music, paragraph 4b defines it as Gregorian chant, sacred polyphony, 'and sacred popular music be it liturgical or simply religious.'

That last category would include non-liturgical hymns, negro spirituals, sentimental Christmas songs such as 'Mary's Boy Child', and numbers from West End musicals like 'Jesus Christ Superstar.' Even George Harrison's 'My Sweet Lord' would pass muster, despite its reference to Hare Krishna.

It is certainly undesirable to set religious words to melodies which have a strong secular connotation, but I am not aware that the Magisterium has anathematized the practice. As for Pius X's motu proprio, it was a dead letter long before Vatican II. Germany and Austria had no intention of abandoning the sacred music of Haydn, Mozart and Schubert, and even in England and America (where it was taken more seriously) the injunction to oust women from choirs was being tacitly ignored before many years had passed.

John Nolan's comment, "..and sacred popular music be it liturgical or simply religious.' That last category would include non-liturgical hymns, negro spirituals, sentimental Christmas songs such as 'Mary's Boy Child', and numbers from West End musicals like 'Jesus Christ Superstar.'" reminds me of the closing hymn at my cousin's funeral Mass (she died at age 52 of cancer). She had requested "Spirit in the Sky" by Norman Greenbaum be played over the loudspeakers, which the priest did.

I found it pretty inappropriate, but it was so typical of her. She was devout Catholic, and a child of the '60s. So whadda ya gonna do? It made everyone smile.

Saint Michael the arch angel defend us in battle...

Liturgical corruption is widespread. It started long ago.. Individual pastors could stop it and some do. However, they are few and far between. The way we pray is the way we believe. And vice versa.

I am all for any increase in anything which aids an increase in devotion and love of God, but no mere form holds the key to that problem, both forms CAN be an exceptionally spiritual experience when done by someone who can truly walk the walk..both can also be, and frequwntly are, done in anything BUT such a manner...however....

Today is more as if the Christians in Rome decided en masse to go ahead and offer up that incense so that everybody would LIKE them and they could all get along and keep those better paying positions.

The lack of this Church, and any denomination, and why everyone is walking away, and caving in to the pressure, is because nobody is telling them positively how to experience God and KNOW it real. Zero spiritual training, and when leaders just as ignorant, they are going to see it as only an attractiveness (marketing) problem and attempt a rebrand. Meanwhile, no such average church member is going to sacrifice a thing for what they secretly suspect is a sham and truly has no answers...and to a relative degree, they are sadly correct.

And this is exactly what is happening. The always-preached "New Evangelization" is sadly laughable today when any such evangelist has nothing truly to offer but hearsay which they themselves find woefully lacking.

IF the current powers that be even bought into the above statement of reality, they would need research the answer and likely hire consulting firms who could advise the most attractive and marketable spirituality and them likely put out mandatory Zen Buddism break-out sessions and workshops.