IS RECEIVING ANY OF THE SACRAMENTS BECOMING AN ACT OF "MAGIC" IN THE NEW ERA OF THE CHURCH WE ARE IN, AND EPOCAL CHANGE? 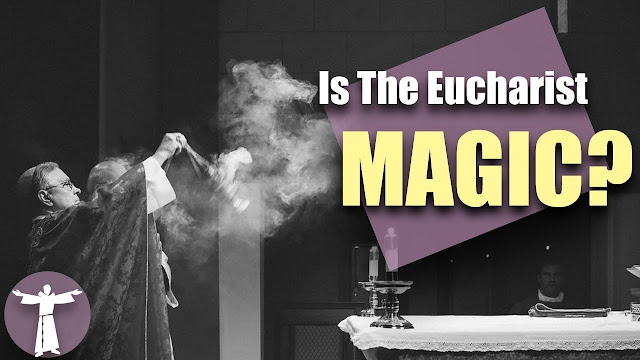 It appears to me, that even from the highest levels of the Church, we no longer are asking people to be in a state of grace to receive the Sacraments of the Church. And in some dioceses around the world, think Germany, Holy Communion is regularly given to non Catholics, especially non Catholic spouses and without any requirement of the Sacrament of Penance even suggested to them.

And of course, the opening of Holy Communion to those in adulterous relationships is becoming the norm in many places too.

I had a discussion this morning about the fact that many parents still, thank God, are requesting baptism for their Children, but the parents do not practice their faith at all and have no real intention of seeing to it that their children will be catechized in the faith, make subsequent sacraments and attend Mass each Sunday and Holy Day of Obligation.

This new phenomenon which began shortly after Vatican II and seems to be on steroids now seems to me to make the Sacraments of the Church good luck charms or magic or at least that anyone can feel some kind of connection to Jesus and the Church regardless of any commitment on their part to repent and be free of sin in receiving the Sacraments.

How many couples when they get married, request the Sacrament of Penance before their Nuptials and today we know that many Catholics, perhaps a majority, are living together in sin prior to their marriage or at least fornicating regularly and without any thought of the ramification of mortal sin on their souls.

What to do, what to do, oh what are we to do? Throw in the towel or become rigid, ossified Catholic fundamentalists who have no hint of pastoral concern and love for a wayward world?
Posted by Fr. Allan J. McDonald at Friday, January 03, 2020

It is not pastoral to allow people in objective states of mortal sin to receive Holy Communion. Those who want people to be in the state of grace to receive Communion are not "Catholic fundamentalists" without pastoral concern. In fact, we are very concerned about others drawing down condemnation upon themselves by receiving Communion not in the state of grace. We are also concerned about the offense offered to Our Blessed Lord by blasphemous communions.

The answer is not to throw in the towel. The answer is to recognize that adhering to what the Church teaches in not "Catholic fundamentalism," but merely the baseline aspect of being Catholic.

I have been quite disgusted by the typical trotting up to receive the magic cookie which hopefully grants life eternal to the club members only attitude....and it has been this way for 30yrs, as long as I have been Catholic.

Homilies are worthless nowadays.Often times I listen but when it's over I wonder what it was about. There is no fear of the last things. Only some nebulous statement of living with love for neighbor or reconciling with separated family members. yawn

I have to agree with Bob. The concerns of this particular blog post are about 30-35 years too late. That doesn't mean we shouldn't deal with it, but seriously, why NOW? This has been going on longer than most of us can remember.

Well, it looks like the Methodists---or to use the more proper lexicon, the United Methodists---are throwing in the towel. News today is a proposal to split the irreconcilable factions, the more conservative portion (more popular in the South) that still views marriage as the "radical" concept of one man and one woman and the "anything goes" or "new age" faction that endorses same-sex marriage. Just another example of Protestantism dividing into more factions and subdenominations. Do you suspect there is a correlation between denominations getting more liberal (such as on abortion or gay marriage) and loss of followers?

One reason a split has not been proposed in the Episcopal Church is that there are so few remaining, only about 1.7 million or so, half their peak in the 1960s. Conservatives displeased with the ordination of women, revision to the Prayer Book and same-sex "theology' have mostly bolted---some becoming Catholic, some Eastern Orthodox, some joining various Anglican factions.

With the collapse of traditional moral teachings in mainline Protestantism, you wonder what will be next? Maybe adultery is OK if all the parties involved consent? Maybe the Lord's Day no longer has any meaning? I guess we can all this "the search for the lowest common denominators."

In my diocese, actually an archdiocese, we are on the third bishop who allows everyone to receive Holy Communion at weddings and funerals because they are special occasions. The archbishop who started this of course resigned in disgrace and scandal some years back, and the bishops who have followed him have allowed the practice to continue. The horse has been out of the barn for a long time.

As the previous comments indicates the Catholic Church has de facto fractured long before the Methodists.