POPE BENEDICT XVI, HUMAN MANIPULATION AND INTERFERENCE OR DIVINE PROVIDENCE? IT DEPENDS ON HOW YOU INTERPRET VATICAN II 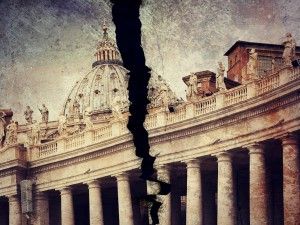 
And Sandro Magister's take on the bombshell:


A Bombshell Book. Ratzinger and Sarah Ask Francis Not to Make an Opening for Married Priests

I will give them credit only for their concern about a former pope speaking on matters of a reigning pope, no matter how much Pope Francis despises the monarchal term "reigning."

But there are no canon laws on what a former pope can and can't do, how he can or can't dress and how he will or will not be called. Only doctors of the law what that kind of stuff. To hell with canon law new or old. Isn't that what the left wants and use "doctors of the law" to denigrate those rigid types who want to use canon law?

This is my faith perspective and thus can't be proven with scientific facts. I believe Pope Benedict's long life that parallels the current reigning papacy is Divine Providence. How's that? Has anyone considered this? The Church isn't just a human institution or a social phenomenon. It is a Divine Instituion and guided and protected by Divine Providence through he Holy Spirit.

Pope Benedict when he was the reigning pope clearly set out his interpretation of Vatican II. He demolished the "spirit" of Vatican II and insisted that Vatican II be interpreted in view of what preceded it, 2000 years of T/tradition. The key phrase was/is the hermeneutics of continuity not disruption as though Vatican II intended to create an entirely new Church in a breach with what preceded it.

Pope Francis is not of this vision. He is into the 1970's "spirit" of Vatican II as a breach from what preceded it. He has reopened the old canards, thought to have been settled by John Paul II and Benedict, of the possibility of changing everything in the Church by creating processes that will bring this about. He doesn't stop heterodoxy in any authoritative way, especially what the German bishops are doing. He's allowing regional processes of discontinuity to go forward which will eventually change the universal Church. He uses footnotes that act like computer viruses to invert defined teachings. It's the opening of Pandora's box that will make us like the Anglican Communion in all thing from female ordination to gay marriage. And all of it is based on "social justice."

This article is an example of Pope Francis passively allowing regional processes to move forward:


I am in Pope Benedict's camp when it comes to continuity in interpreting Vatican II and maintaining strong Catholic doctrinal and cultural identity in a secular world gone mad.

Thus I believe Pope Benedict's interference in the current Pontiff's papacy may well be Divine Providence.

SO I guess we should have never had St. Peter? He was married, wasn't he?