THIS IS A FASCINATING HISTORY OF THE POST-VATICAN II VENERALBE ARCHBISHOP FULTON J. SHEEN

You can read the Washington Post essay in full by pressing the title: 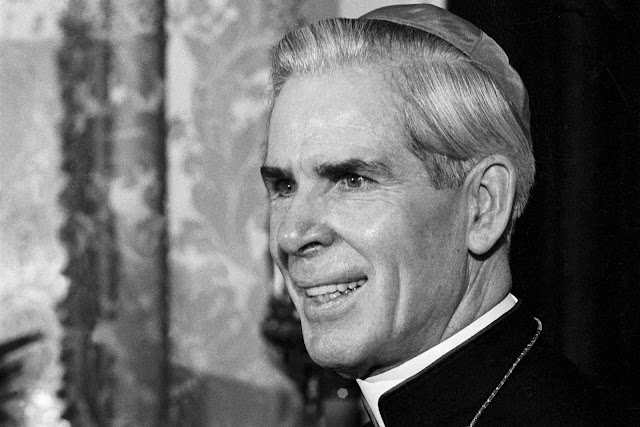 The promise and peril of the Catholic Church

The conflict between obedience, hierarchy and social justice.

Excerpts:
(Sheen's) media platforms — “Life Is Worth Living,” his earlier radio program, “The Catholic Hour,” and his dozens of books — to espouse a form of social justice that emphasized the rights of the poor and workers.

Preaching at St. Patrick’s Cathedral in New York City, Sheen called on employers to pay their workers a living wage. Another sermon proposed the formation of trade guilds whose members would share in the profits of their factory. On “Life Is Worth Living,” Sheen celebrated the growth of unions as a necessary counterweight to “the moneyed power of the capitalist.”

The Vatican II Council, convened from 1962 to 1965, engaged Sheen in an international conversation about the Catholic Church’s future. He called for mobile schools for the poor and the creation of chaplains to minister to factory workers, while also suggesting that wealthy Catholics be encouraged to give some of their possessions to the poor.

Vatican II changed the Catholic Church in ways that aligned with Sheen’s vision. The documents issued by the council, including Gaudium et Spes, the most important, denounced “immense economic inequalities” and “social discrimination.” But they also reaffirmed the importance of authority within the church, especially obedience of priests to their bishops.

Vatican II changed the Catholic Church in ways that aligned with Sheen’s vision. The documents issued by the council, including Gaudium et Spes, the most important, denounced “immense economic inequalities” and “social discrimination.” But they also reaffirmed the importance of authority within the church, especially obedience of priests to their bishops.

Sheen believed that Rochester’s mixture of wealth and poverty made it the perfect place to implement the vision of Vatican II. One observer noted, “It appeared certain that many of the changes fostered by Vatican Council II … will be instituted in the Rochester diocese.” And they were: with all the contradictions and challenges that entailed.

Sheen emphasized social justice, especially for Rochester’s African American population. In a speech to the Rochester U.S. Chamber of Commerce, Sheen chided the assembled business executives for ignoring the inner city’s distress. The bishop also took action, appointing P. David Finks, a priest who had worked with radical organizer Saul Alinsky, to the newly created position of Vicar of Urban Ministry. He imposed a progressive tax on church construction in the diocese, with the collected money to be spent in the inner city. And he created an organization to raise money from the diocese to help families find adequate housing.

When change came from below, rather than from the bishop’s office, Sheen reacted with hostility. He condemned the nontraditional “underground masses” held by some Rochester Catholics as a “perversion of the holy.” In the spirit of ecumenism, Sheen sought to merge the local Catholic seminary with the Protestant Rochester-Colgate Theological Seminary — but when members of Rochester-Colgate’s Black Student Caucus took over a campus building to protest the lack of African American faculty, Sheen killed the proposed merger.

Sheen’s desire to seek social justice through top-down methods ultimately proved fatal to his vision. In 1968, frustrated at his inability to bridge the gap between suburban Catholics and Rochester’s inner city, Sheen presented Robert Weaver, the secretary for Housing and Urban Development, with a remarkable offer: The bishop would hand over an entire parish, St. Bridget’s, to the government if the government promised to use the property for public housing.

It was the sort of dramatic gesture one would expect from a consummate showman like Sheen. But he had not consulted with the priest and parishioners of St. Bridget’s before pledging to give away their parish. Not surprisingly, they responded with outrage, as did many other Rochester Catholics. Hundreds of calls poured into the bishop’s office, with most denouncing the donation. Resistance came from priests as well as parishioners. Long frustrated by Sheen’s autocratic style, 22 priests signed a letter protesting the giveaway.

The Church has always been there to foster justice and help the materially and spiritually poor, performing countless acts of great spiritual and corporal mercy, such as by building hospitals, orphanages, etc. If social justice was something Vatican II brought about in the Church, and it seems to be so, then it shows that this Council was nothing more than a limited product of its times, being overwhelmingly influenced by the secular world of the 1960s in which social Marxism was ubiquitous.

I was surprised at the tone of the excerpts so clicked the link. When I saw it was the Washington Post, I thought "It figures."