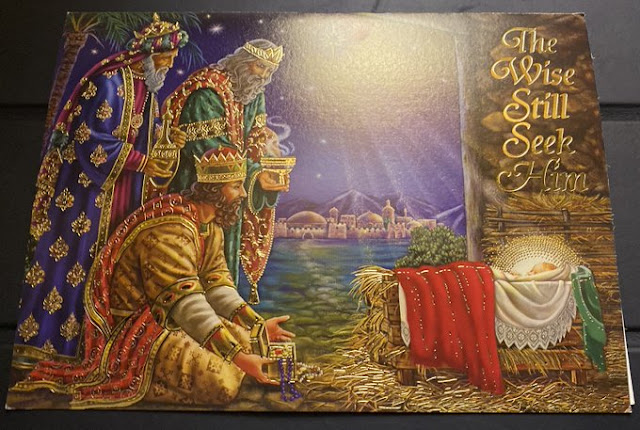 In His Holiness' message on the actual day of Epiphany, today, January 6th, not only mentioned La Befana, but this:


Pointing to the chief priests and scribes, Francis noted that they have studied the scriptures and prophecies and can recite them to the verse, meaning they knew exactly where Jesus, the messiah, was born, but chose not to go.
Francis, using these figures as an example, said they offer a lesson for Christians that “it is not enough to be knowledgeable.” Rather, he said, “unless we step out of ourselves, unless we encounter others and worship, we cannot know God.”
“Theology and pastoral effectiveness mean little or nothing unless we bend the knee; unless we kneel down like the Magi, who were not only knowledgeable about planning a journey, but also capable of setting out and bowing down in worship,” he said.
I agree with what the Pope said and have preached it over the years.

What I don't like is the denigration of those who are doctors of the law and doctrine. They aren't all a bunch of hypocrites, although some are.

Pitting "scribes and Pharisees" against those who are authentic Christians is a false dichotomy and unnecessary. Faith seeking understanding is a virtue. Church law is for the common good, to avoid chaos and polarization in the Church.

I think too, this Pope of all popes, should know that a constant denigrating of  the various camps of Jews and their leaders during the time of Jesus can come across as anti Semitic. Jesus was a Pharisee. They weren't all hypocrites and bad nor are the Jews in general. The Jews who reject Jesus as the Messiah then and now do so, for the most part, through no fault of their own. There was/is cultural and religious conditioning that is the cause.

With the rise of anti Semitic sentiments around the world, the pope needs to avoid 1970's biblical scholarship that denigrates the Pharisees as "doctors of the law" which was and is a polemic against orthodoxy and canon law and their observance in the Church, be it pre-Vatican II or Post Vatican II.
Posted by Fr. Allan J. McDonald at Monday, January 06, 2020

It's not the 'pharisees' he is denigrating. It is us. Again. Again. Again. Anything to humiliate and denigrate and demoralize... until everyone joins in the new religion for the new age!

Our Blessed Lord was not a Pharisee.

The only pharisees in evidence are all the bishops, cardinals, and even pope who could not lead anyone to experience God even if you put a gun to their head...they are obsessed with what are essentially political matters and struggles for power/sex/wealth, and think sticking with or tinkering with empty form is what the religion is all about.

As for mentioning pharisees and scribes as examples of phonies, well, it is what our Faith teaches us, and pharisee and phony are virtually identical in Christian lexicon, and I would have been at a total loss to write my above comment minus that comparison.

Not sure what other phrases Bergoglio should use while relentlessly attacking orthodox Christians for holding tight to the original deposit of Faith, if he wants to make his point that anyone who opposes him is a phony...unless, of course, he wants to write an encyclical on prayer where he can really pour on the vitriol and name calling unavailable in manageable homily time frames, while showing the true mindset needed to approach our Creator, which is apparently with as much anger as possible ...

"These theories, that Jesus was part of a group of Pharisees, is made now by many scholars, and not only Jews.

"In fact, it cannot be proved by any of our sources, from the New Testament or others."

I guess THAT explains Francis' hatred of the Pharisees.

I am afraid the HF will forfeit all credibility with even secularists as he looses his credibility with orthodox (small o) theologians as he goes about making up stuff. He will become just a pitiful old person totally lacking credibility. May God have mercy upon him.

I think, going by his recorded life, including judgements of superiors, his own admissions regarding psychological counsel, his own feelings described in those early years,.... combined with my own personal hearing anything at all from this Pope being an interview he granted shortly after the election and he was asked if he had ever had an experience of God.....

his paraphrased reply said that when he was given news of the election, and him given the traditional solitude in order to decide to accept or decline the elevation to the Chair, that a great peace came over him, and the thought, "Yes, I can do this!".....where the supreme head of my Church says he encountered God in a totally self aware and self centered mentation....well, that bothered me muchly as did reading what he was saying as Pope and anything not negative was at best platitude shallow unless he spoke off the cuff where the wheels generally fell right off immediately...

So, I am continuously under the influence of the feeling that this man was raised to the Chair via promotion by other churchmen with them seeing him as a maleable unstable unsophisticated ally in their cause of remaking the Church so they could stop hiding their own lifestyles and income streams (at least some of which would come from outside in ANY other similar group of powerbrokers ANYwhere else in the world), and them thinking him merely a puppet.

However, this is not going exactly as planned as he often bites the hand which fed, just to show who is really boss right now.
And his ruthless purge of opponents and constant 3rd world dictator demonizing of all opponemts and the shameless glorifying from within his camp in similar terms bordering on divine, not only shows a true fan base, but also true terror inside to push folk to abase their own intellect to such a degree, which also matches reports from there...

This all actually on topic and perfectly well explaining his commentaries, and pretty much leaving me with the thought, "It is exactly what would come from such a cabal, and what else would you truly expect to hear from them? And truthfully, the answer is nothing...

Except...the dynamics of this being true would nearly inevitably forecast ever more bizarre and troubling behavior and announcements as it spun its way down to inevitable collapse, and so I stay tuned to currents events in order to watch for this, IF it happens. So far, I have seen nothing to disuade at all, but only hints that it is right....only time will tell...or can always find out the real skinny in Heaven, where all will be made clear.