WHEREIN POPE FRANCIS CONFUSES ME AND KEEPS ME OFF BALANCED 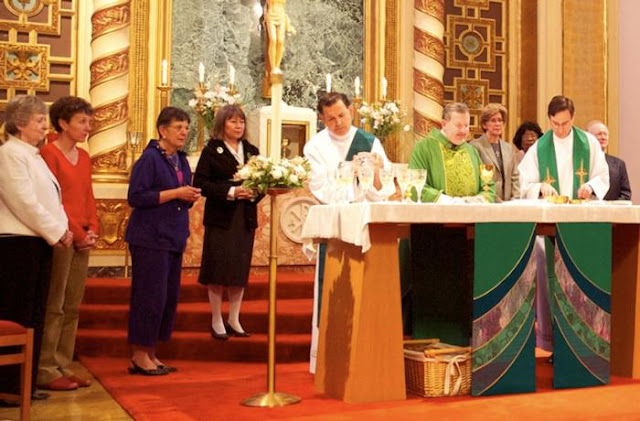 Way back in November, Pope Francis said this about the laity and permanent deacons:

No to clericalizing the laity

Setting aside his prepared text, Pope Francis warned against the danger of what he termed as “clericalizing the laity”.  Sometimes, he said, permanent deacons, who are to be the custodians of service in dioceses, soon find themselves “looking at the altar” and end up as “wannaby priests”.  Work with the laity but don’t clericalize them, the Pope said. "Move the deacons away from the altar… They are the custodians of service, not first-class altar boys or second-class priests,” he added.

My comment: Deacons, transitional or permanent enter the clerical state and have specific functions at the altar and in service. It isn't either/or but both/and.

The laity, though, that's another case. Vatican II and the General Instruction of the Roman Missal has in fact "clericalized" them and often "laicized" the priest. Their role is in the world, at home, work, the public square and yes assisting the poor, vulnerable and the like as co-workers with religious orders and permanent deacons.

Yet, what have we done? We make the actual laity lectors, Communion Ministers and the like in service to the altar. Were the pope's comments directed to the actual laity who are drafted into service at the altar?

"Move the (laity) away from the altar… They are the custodians of service (in the world), not first-class altar boys or second-class priests,” (His Holiness) added.
Posted by Fr. Allan J. McDonald at Friday, January 24, 2020

I suppose many of the more seasoned readers of this blog remember when the gates were opened and large numbers of laity and women religious rushed on to the sacristy to provide Communion, sing, dance, read responsoral psalms and epistles. So the Holy Father seems to be swimming against the tide. One event that sticks in my memory was an announcement that we needed to prepare for a Church without priests and ‘services’ conducted by laity. So this is one of those times when he will be ignored by progressives and approved by orthodox.

Well, maybe that explains why deacons never---and I mean never---preach at my parish in 30327. It would make them look "too clerical."