WOW! CARDINAL SARAH GRABS THE TIGER BY THE TAIL AND WILLIAMSBURG CATHOLIC PARISH CANCELS THE ORDINATION OF AN EPISCOPAL PRIESTESS AS A “BISHOP” 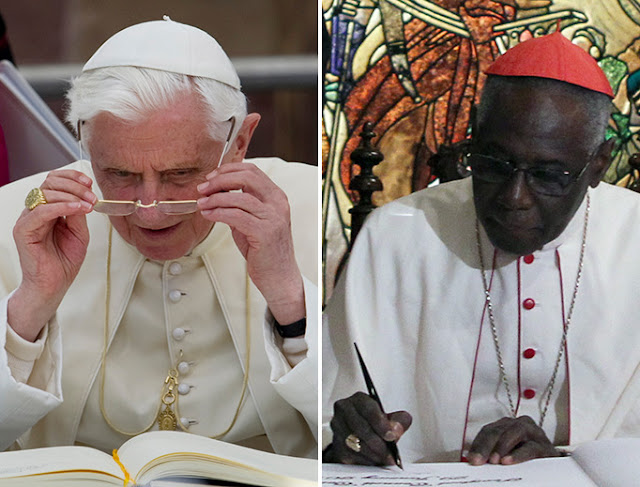 Good for Cardinal Sarah who tweeted this today:


Because of the incessant, nauseating and dishonest controversies that haven’t stopped since the beginning of the week concerning the book ‘From The Depths Of Our Hearts’, this evening I met with Pope Emeritus Benedict XVI.
With Pope Emeritus Benedict XVI we have been able to certify how there is no misunderstanding between us. I came out very happy, full of peace and of courage from this beautiful meeting.
I call upon you to read and to meditate on “From The Depths Of Our Hearts”. I warmly thank my editor, Nicolas Diat, as well as the publisher Fayard, for the precision, probity, seriousness, and professionalism which they have shown. Have a really good read! 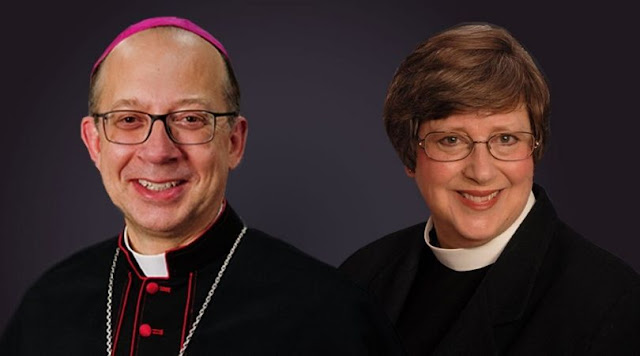 And it’s canceled thank God, the simulation of a Sacrament in a Catholic Church and at a consecrated Catholic altar, a sacrilege, of a woman claiming to be a priest of the One, Holy, Catholic and Apostolic Church who also supports Gay “marriage” and more than like pro-choice, This is fanatical ecumenism run amuck and nipped in the bud as it should be:
CNA reports:


Catholic parish will not host Episcopalian consecration
The Episcopal Diocese of Southern Virginia will no longer hold an episcopal consecration and ordination at a Catholic parish in Williamsburg, following an internet petition signed by over 3,000 people objecting to the event.
“It is with great sadness that I have received a letter from Bishop-Elect Susan Haynes stating that, due to the controversy of the proposed use of St. Bede Catholic Church for her consecration of the Episcopal Diocese of Southern Virginia, she has decided to find another location for the ceremony to take place,” said a statement from Bishop Barry Knestout of the Catholic Richmond diocese on Friday, Jan. 17. St. Bede Catholic Church is located within the diocese.
A statement from the Episcopal Diocese of Southern Virginia said that the consecration will now take place at Williamsburg Community Chapel. The Williamsburg Community Chapel’s website states that it is home to an “interdenominational family of faith.”

The invitation began, "God willing and the people consenting..."

I guess the people not consenting really meant something...

Our Bishop, Richmond diocese, silenced one of his priests for urging his boss on his blog to take responsibility for his part in the coverup of now layman but formerly Cardinal McCarrick's sexual exploitation activities. It should be recalled also that then Cardinal McCarrick was instrumental as a special ambassador of the Holy See to China for betraying the Chinese underground Catholic Church to the Communist regime. Chinese (Honkong) Cardinal Zen insists that the sell-out of the Chinese Church is "murdering" the Church in that country. But who knows what kind of pressure was used by the communist regime to compel the Ambassador and the Holy See to make such an agreement. Threat to expose crimes at high places in exchange for making Chinese Premier XI de facto head of the Catholic Church in China? For more detail read SETTIMO CIELO.COM!

Don't the Episcopalians have their own church to do this in? Why do they need a Catholic Church?

Well, who knew how liberal things were getting in Alabama these days? Alabama? Home of George Wallace and Bull Conner? Yep---well, anyway, the Episcopal Diocese of Alabama (covering northern and central Alabama) elected a woman as their next bishop. Golly, hard to find a conservative Episcopal diocese even in the Deep South!

As most are probably aware, the Eucharist is always celebrated at the ordination of an Episcopal bishop---and priest for that matter. So it was not just a matter of a "Morning Prayer and Sermon" service where she would be ordained, and no communion. And who was giving the bishop (of Richmond) the most Hell---outside groups? The parishioners?

Well, some background---Virginia was a one diocese state until 1973 or so, when it was divided into two dioceses---Richmond and Arlington (the latter including Northern Virginia more or less and some of the Northern Neck region east of Fredericksburg). Richmond had a lot of the territory (aking to Savannah here in Georgia) but of course the fastest growth has been in NOVA (Northern Virginia). Anyway, the story I heard from living up there years ago was that when the state was divided, the liberals stuck with the Richmond Diocese and the conservatives went to Arlington. Thus explains the very liberal Walter Sullivans (bishop of Richmond for about 30 years from Nixon to Bush 2), into all the social justice stuff like death penalty and nuclear arms. I know people in the Arlington Diocese who worship in DC because the former is too conservative for them. Anyway, those liking a more liberal view of things (like the cancelled ordination of Ms. Episcopal bishop) would prefer the Richmond Diocese to Arlington (though Arlington is not as conservative as it used to be).