WHEN DOES CHRISTMASTIDE END FOR YOU? 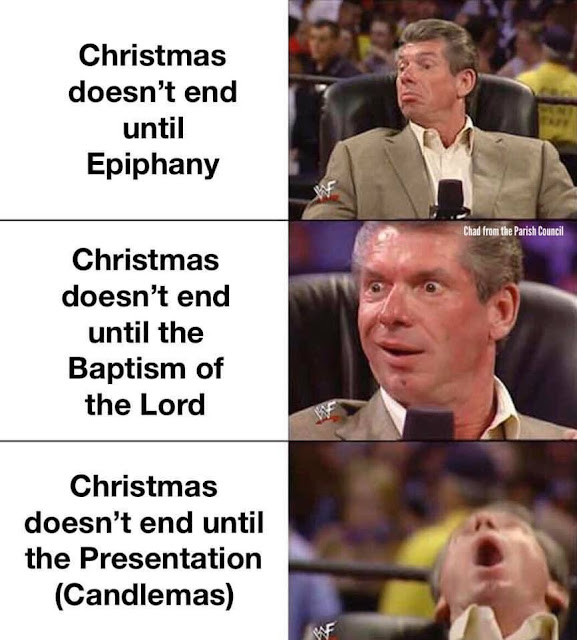 I would say Epiphany---like the "12 days of Christmas."

I have probably complained about this before, but it is ironic that radio stations will start playing Christmas music around Thanksgiving and then cease that at the end of Christmas night---December 26 and we are back to secular music. Our pastor in 30327 recalled his second year in Atlanta, decades ago, and how he was horrified to see a Christmas tree out on the street on Christmas night. He pointed out in his native Ireland that many people did not put their tree up until Christmas Eve, which makes sense---I mean, isn't most of December covered by Advent, or should be?!?

I have decided to let Home Depot decide for me which days are in the Christmas season. Christmas began on October 27th and ended about December 19th. Shopping for my valentine cards and 4th of July fireworks now.

Ending Christmas on Epiphany makes no sense given that Epiphany has an Octave (traditionally, anyway). There's an argument to start winding down at the conclusion of the octave, but given the secular insistence on starting Christmas over a month too early, I think it nice to balance that out by continuing the celebration until Candlemas.

In the newer calendar the Xmas season ends on the feast of the Baptism of Our Lord. In the older calendar it ends on Epiphany in the temporal cycle and on the Purification of the BVM (2 Feb.) in the sanctoral cycle.

Some supermarkets had Easter eggs on display before the end of December.

hmm...let's see....Christmas Day lasts 8 days, Christmas season lasts 12 days until Epiphany and one of the earlier dates thought the actual birthday, and Christmas tidings/Christmastide until Feb 2 and Feast of the Purification of The Blessed Virgin...how'd I do?

Actually, for the West, it begins and ends when Madison Ave and corporate America bloody well tells us it starts and ends...I thought EVERYbody knew that?....Who cares what the religion which started it all happens to think? Who listens to THEM, anyhow?

In our family, the Christmas tree and decorations were put up no earlier than December 17th (which coincided with the "O" antiphons and the expectation of Jesus' coming) and the tree first lighted only on Christmas Eve. Everything stayed as is until Epiphany. I've read that some families with nativity sets like to make it more meaningful for their children by putting just Mary, Joseph and the ox and ass in before Christmas. They add the baby Jesus on Christmas morning and then the shepherds and sheep later in the day and finally the Magi on Epiphany. My Methodist neighbors put their outdoor nativity scene and Christmas decorations up the day after Thanksgiving and everything is down the day after Christmas. I think to myself that they must celebrate Advent instead of Christmas!

If it is the cool German eggs with the toy in them I would buy them year-round.

Well, in the spirit of Vatican Zero's comment above, I think I will choose the calendar followed by Menards (which is a mid-western hardware store chain), which began displays of Christmas items the day after Labor Day (no kidding!).

Valentines Day items have been out since a few days after Christmas.

God bless.
Bee
P.S. In my family we always put up the Christmas tree on Christmas Eve. We took down the tree and inside decorations on Epiphany. We took down outside wreaths, lights, garland and anything else on or around Feb. 2.

Those are good ideas, Anonymous and Bee.

In our family, we put the tree up along with the Nativity Scene (without Christ) on St. Nicholas Day and we put lights on the tree on St. Lucy Day. Then we decorate the tree on Gaudete Sunday.

Well, we can all agree that Christmas does not end on December 25!