THE WAY WE WERE AND ARE AGAIN: NUPTIAL MASS IN CHICAGO CHURCH IN 1922! 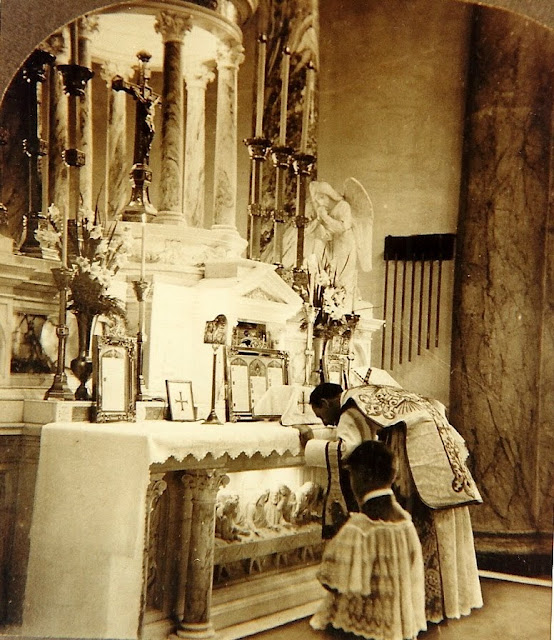 Here's a fascinating glimpse at what it was like to attend Mass in the 1920s.

Mass at St. Ignatius Church in Chicago Ill. celebrated in 1922. The Pictures were part of an effort to assist priests in fine-tuning their understanding of the rubrics and gestures.

It is hard to imagine a bishop of our times being so informal and blunt, yet those were days in which many bishops and local pastors were known for their large, colorful personalities. Enjoy some excerpts of this colorfully blunt letter, which focused on encouraging priests to be more liturgically minded. I include some brief remarks from a blog post I copy in the bloggers red text :

Confusion worse confounded has arisen during the past few years in the matter of our Sunday services. An inter-parochial competitive system has ended in chaos and not a little distant disedification. We must now return to sane normal conditions. Hence the following mandatory regulations will be effective Sunday, October 6.

The High Mass (Solemn or Missa Cantata) must be the last of the parish masses and may not be an hour later than eleven. Every church in Baltimore, Washington, and Cumberland is expected to have a High Mass. The same is expected of all parishes outside the above cities where a choir is possible. The choir does not have to be an adult choir. It may be composed of school children. In country parishes where heretofore there has been no High Mass, I desire the pastors to work towards a High Mass. The Missa parochialis must be kept in its honorable place. … Let the well-prepared sermon be short and practical; let the music be strictly liturgical and let the liturgy be carried out with dignity and correctly.

We see that in certain areas, the low Mass (recited and whispered) had come to be the only type celebrated. High Mass, with the priest and choir singing significant portions, was becoming too rare. This afforded less possibility for the faithful to interact with the Liturgy. Further, it excluded a vast repertoire of chant, polyphony, and classical music from the Mass. In response, the Archbishop insisted that at least one parish Mass should open this treasure to God’s people.

The epistle and gospel should be read at all the masses. … A short discourse (of even five-minutes duration) should be given at each mass. The work of instruction should be supplemented by the recommendation of pamphlets as reading matter. No parish church should be without a pamphlet rack.

A significant problem in that era was that the readings were proclaimed in Latin by the priest at the altar. Because few if any of the laity knew Latin, the proclamation of the Word mostly fell on deaf ears. A common solution was that the priest would go to the pulpit and repeat the readings in the vernacular, but this lengthened the Mass. Some priests evidently skipped this altogether and merely continued on with the Mass. Some even skipped a sermon of any sort at certain masses. The Archbishop was surely not pleased and insisted that teaching the faith was an essential purpose of any liturgy.

Some of our younger parish clergy read their sermons. This should not be done except for some very special reason. The priest who is not capable of preparing and delivering a brief, clear instruction on Catholic teaching to his people is not fit to be in parish work. The people as a rule do not want to listen to a sermon reader. The reader is usually a poor one and his matter many times is poorer. We do not expect every priest to be a Lacordaire or a Bossuet. We do expect every priest however to be a teacher of God’s word, an intelligent and intelligible one. We have heard splendid eloquence on the subject of card parties, bazaars, church support, etc. and then mental confusion in many cases when the time came for the sermon. Our work as preachers of the gospel of Jesus Christ is of infinite importance. It ought to be done with prayerful preparation. The sermon should be delivered in such a manner that our people can hear, understand, and take away with them a better knowledge of their faith and at the same time feel moved to live that faith and more practical way. If the priests of a parish wish to hold her people’s loyalty to their parish church, they cannot do it by competition in the matter of late hours for masses, unbecoming a hurry in the celebration of divine mysteries, or curtailment of devotional church practices.

In some parishes of the cities there is no evening service. The reason given is that the people will not come. If the pastor will only give the people a chance to come, they will come in sufficient numbers to Rosary and Benediction of the Blessed Sacrament. They will come gladly to hear a course of sermons during Advent, Lent, novenas, etc. They will not come to hear the rosary and litany recited in a marathon style. They leave their parish church and go to one where there is devotion in the sanctuary.

We have completed our building program. The brick-and-mortar work is almost over. Let us now apply ourselves to the more important work of gathering our people around the sanctuary in order that we may build Christ our Blessed Lord into their hearts and lives. We have, thank God, many parishes where liturgical functions are carried out with inspiring dignity, order, correctness, and consequent impressiveness. … But where there is a tendency to starve the people spiritually, the priest soon realizes a reaction that, to say the least, is neither healthy nor pleasant.

Let us then in God’s name begin with enthusiasm a new era of order in matters liturgical October 6th.

I suspect that by at least the 1950s even parishes with modest musical resources could manage a Sunday Sung Mass. Reading the Epistle and Gospel from the pulpit did not lengthen the Mass appreciably and was standard practice on Sundays. Those who attended weekday Masses would usually have a daily missal.

What killed off the parish Missa Cantata was the introduction of the vernacular Mass from 1964 onwards. It gave place to the 4-hymn sandwich with the liturgical elements simply being spoken, which is still sadly prevalent.

The best sermons are those which have been written out beforehand. The archbishop's advocacy of short extempore homilies is wrong-headed. In any case, there was only a sermon on Sundays and Holy Days, and sermons were often given in the afternoon (Rosary, Sermon and Benediction).

"They leave their parish church and go to one where there is devotion in the sanctuary."

Too bad my current priest will never see this...the one who speaks with a lisp, knits and gardens, wears dirty sandals and frayed jeans while celebrating daily Mass, and who whines/drones through Sunday Mass sounding for all the world as Kermit the Frog when singing his progressively broadway show tuned "through him, with him and in him" closing act to Pt 1 of the musical, and whose homilies run about 10-15mins with every other sentence beginning with, "Indeeeeeed". This bishop made him head of the deanery.