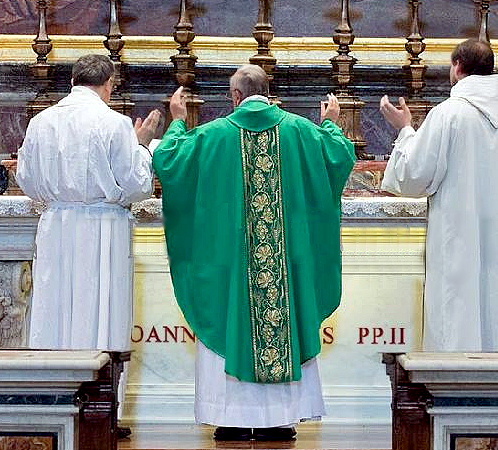 Deacon Fritz Bauerschmidt has a good, conciliatory article at Praytell. You can read the full article by pressing the title. Be low the title I will list the five things he appreciates about the reforms of the Mass after Vatican II with my comments in red:

1. The elimination of “parallel liturgies” for priest and assembly: i.e. for the most part, everyone does everything at the same time.

I would agree with this. When I first started celebrating the EF Mass, I tried to implement this with the 1962 Roman Missal, but I soon discovered that with a silent canon, it was best to launch into the Sanctus myself and then immediately start the Canon as the choir is chanting the Sanctus—it makes the Mass shorter, but I agree that ending the “parallel” Mass, the priest’s and the choir’s was and is a good reform!

Agreed. What we do at the Cathedral’s EF Mass is to have a lay lector read the Epistle and the Gospel too in the vernacular as the priest reads these at the altar in Latin. Again, this useless parallel liturgy. But, what the Cathedral has done is to introduce the lay lector at the EF Mass, although I am not entirely sure how kosher it is for a lay person to read the Gospel in the vernacular even as the priest does it in Latin at the altar (EF liturgical abuse????).

3. The audible recitation of the Canon.

I have mixed feelings on this one. Basically I agree that this was a good move, but as with all prayers of the priest in the OF Mass prayed facing the congregation, the Canon can become a proclamation, like Scripture, directed to the people. The silent or low voice Canon does add a sense of mystery, the holy of the holies, the rood screen, to this part of the Mass and truly is Sacred Silence before the Majesty of God. I think a lower voice for the canon, but audible, would be desirable or at least for the words of consecration. It should be noted, though, that the rubric for the Eucharistic Prayer in the first edition of the 1970 Roman Missal indicated the following:

“The Eucharistic Prayer may be said audibly.” Subsequent reforms of the reformed Missal eliminated this rubric.

4. The communion of the priest and people integrated as a single liturgical action.

I think this was a wise reform too. Although in the modern Mass it is an integrated single liturgical action, nonetheless the priest still receives first in order to conclude the Sacrificial aspect of the Holy Sacrifice of the Mass. There is still a clear difference between the priest’s Communion and the laity’s which follows the priest’s. One of the greatest liturgical abuses of the Mass in the 1970’s was the priest receiving his Holy Communion after the laity had been “fed” theirs. It was called being hospitable. In my first assignment, I encouraged the communion minsters to eat the Host and drink from the chalice at the same time as the priest and I had it quite well choreographed. I was malformed by my 1970’s seminary about the significance of the priest’s Holy Communion, no?

5. The Universal Prayer, in which the faithful exercise their priestly role of offering prayer for the world, as an integral part of every Mass.

I think it is superfluous when the Roman Canon is prayed as the Canon has all the intercessions needed. Not so with the other Eucharistic Prayers, though. Nonetheless, I think the Universal Prayer needs to be codified in the Roman Missal (not the ones in the appendix, these are too wordy.) The made up ones are often a disaster, sometimes ideological and political or inane. But, the good Deacon Fritz should know that when a Deacon is present, the Deacon should pray these not a layman. I believe in the Maronite Rite, the Deacon is the one who prays the embedded intercessions in the canon, not the priest.

1. Everyone doing everything at the same time leads to an excessively linear liturgy. This is noticeable at the OF penitential act which cannot be overlaid by the singing of the Introit. It becomes more glaringly obvious in the Canon. The priest cannot sing along with a polyphonic Sanctus (or indeed a plainchant one unless he is familiar with it). The Sanctus and Benedictus cannot be 'split' and so the celebrant is left standing at the altar for a considerable time doing nothing at all, waiting for the choir to finish before he can begin the Canon. I don't see this as a useful reform.

2. The restoration of the ambo after 1965 was not a bad thing in itself, and I would not object to its being used at a Solemn EF Mass. But like a lot of the 'restorations' it was done in a way not concomitant with liturgical tradition; instead of being a worthy place for the proclamation of Scripture, it doubles as a pulpit for the sermon or (worse) a music desk for the cantor.

3. The 'silent' Canon militates against the excessively linear nature of the Novus Ordo, already mentioned. In the army we had impressed upon us the principle of 'concurrent activity by all groups'. This is equally valid when applied to the liturgy.

4. The 'telescoping' of the Communion rite (priest and people) is a clear break with tradition (the same applies to the penitential act at the start of Mass) and appears to serve no useful purpose; moreover, as you point out, it is open to abuse. A wise reform? I think not.

5. Quite why these intercessions or bidding prayers are called the 'Universal Prayer' is beyond me. In most cases they have only local import and depend on what was on last night's TV news. After we have all sung 'et vitam venturi saeculi' we are brought down to earth with a bump. Having suffered them since 1964 has not made them a whit less tedious. The church I attend most often has dropped them altogether, to (I suspect) universal relief.