LET’S GET REAL FATHER Z; PROPOSE THINGS THAT COULD POSSIBLY HAPPEN; NOT THINGS THAT WILL NEVER HAPPEN AT THIS POINT IN HISTORY OR IN THE NEAR OR FAR FUTURE! 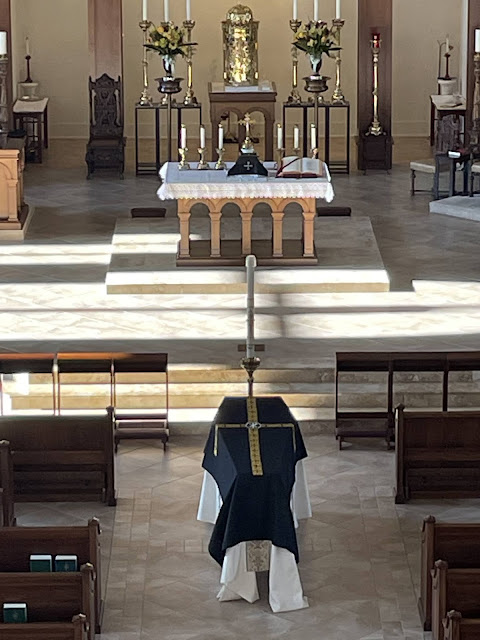 I think Fr. Z is well meaning, but his suggestions are part of the problem not the solution. We would like to see the Ordinary Form Mass improved but some of these suggestions will alienate about the 99% of Catholics who still attend Mass (about 5% to 20% of Catholics) and lead no where but to a further decline in attendance and more anger and alienation.

We recovered the TLM of the 1962 Roman Missal and what happened, that’s all these people who celebrated wanted and they did not want to make the Ordinary Form better, they wanted it suppressed—a bad tactical move and truly an impossible probability! This may have led to Pope Francis putting a stop to this kind of thinking in the most severe and unfair way possible.

No altar girls? Yes, let’s alienate a bunch of Catholic parents with that one.

No lay readers, yes, throw mama under the bus and grandpa as well and see all the goodwill that will create.

Try to impose Gregorian Chant, Polyphony and other Latin Motets or chants and see what the reaction will be when the vernacular hymns are ended and at funerals there is no allowance for “Here I am Lord; On Eagle’s Wings; Be not Afraid and O Danny Boy!”

These are Father Z’s suggestions, some good, some implausible given the nature of things today:

The “Eucharistic coherence” efforts promoted by the bishops are not bad in themselves but they are a little dreamy.  There’s nothing wrong with aiming at Eucharistic congresses, and so forth.  However, just as all politics is local so too must be all efforts to rekindle or indeed kindle for the first time faith in and devotion to the Eucharist.

What we need to do is:

My parish priest ditched altar girls with no adverse reaction. He has actually implemented many of the things Father Z proposed during the pandemic and grew the parish. Maybe you have too many pseudo-intellectuals in your parish who think they know what's best. Of course my pastor explained WHY he was doing those things in a very forthright manner. He is an Ohio farm boy and has a very appealing personality. Not dictatorial at all, ergo, not a "liberal." We continue to have lay readers but no eucharistic monsters of Communion (hat tip to John Nolan).

I think having altar girls idea is a bad one. It confuses and ignores men and women as they are. It tacitly states that women have no contribution nor value except when they emulate men.

If it's right and if it's wrong it's wrong. Why are we worried about alienating people who have a tenuous acceptance of Catholic teachings in the first place? Are we participating in the liturgical life of the Church or selling a product?

That would include some "progressive" bishops and priests - it is clear that many of them have a "tenuous acceptance of Catholic teachings."

In nearly 50 years of associating with traditionally-minded Catholics and attending reverently-celebrated Masses in the OF (almost always partly or wholly in Latin) and the EF (at which I'm usually singing). I can categorically state that I have never met an individual who wanted, let alone expected, the missal of Paul VI to be suppressed. The late Michael Davies put it succinctly when he stated 'All we are asking is that the Old Mass be given parity of esteem with the New'.

In fact, the existence of the Novus Ordo has advantages for those who attend the older Rite exclusively; the new Mass, being a protean beast, can absorb all the progressive tendencies and predilections under the sun, leaving the older form unscathed.

I realize that it is difficult to wean congregations off the four-hymn sandwich, but most parishes have at least three Masses at the weekend and one or two of them can have this format. If you have the musical resources to deliver Gregorian chant, Latin motets and polyphonic settings, then reserve these for the principal Sunday Mass and celebrate it with due solemnity.

Giving catechesis and gradually phasing out Communion in the hand should be a priority.

Every parish i have been assigned including my current one has had altar girls and women lectors/ECMs, and all of those parishes have produced vocations to the priesthood, the most prolific one, the Church of the Most Holy Trinity in Augusta, which is still producing vocations, the most of any parish in our diocese. And in all my parishes the presence of girls has not negatively impacted on boys wanting to serve and as the boys become teenagers they seem to appreciate the opposite sex even more. And in all my parishes altar servers continue through high school and some even in college!

I’m not sure about this antipathy to girls serving the altar. In fact it worries me a bit.

Girls serving at the altar was a rupture in our liturgical tradition and came from wilful disobedience just like Communion in the hand. The Holy See caved on both.

Gee Father McDonald, if every parish has had altar girls, it MUST be O.K..

'I'm not sure about this antipathy to girls serving [at] the altar. In fact it worries me a bit.' (Fr Allan McDonald)

It didn't worry Innocent IV (1254), Benedict XIV (1775), Paul VI (1970) or John Paul II (1980) who explicitly reprobated the practice. The permission dates from 1992/4 and is hedged about with conditions. The tradition practice of boys only is still recommended; a bishop may allow female servers in his own diocese but this is not binding on other bishops; even if he does allow it he cannot impose it on any parish; and even in parishes where it is allowed an individual priest can choose not to have it. It is not permitted in the Extraordinary Form.

So teenage boys appreciate the opposite sex. Quelle surprise! More to do with hormones than liturgical principle, I suspect. Still, in the Novus Ordo the server's role is reduced to fetching and carrying (which is why I gave it up in 1967) so I suppose it can be seen as ancillary*. In which case don't dress them in clerical choir dress; a hotel chambermaid's uniform would be more appropriate as well as more fetching.

You always cut to the chase.