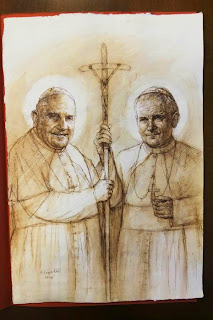 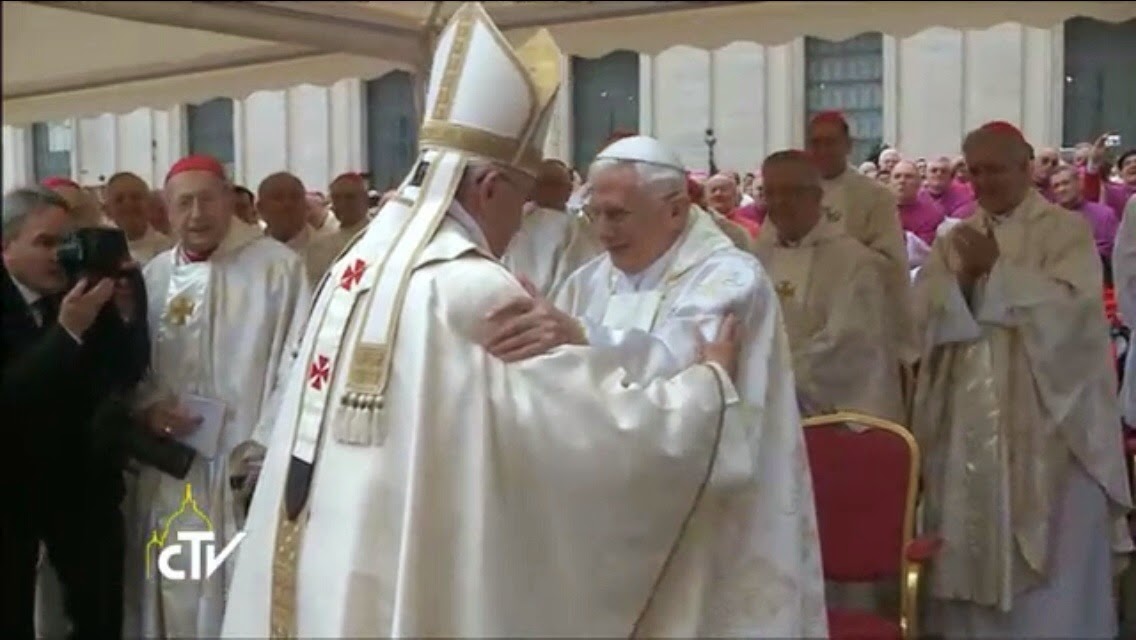 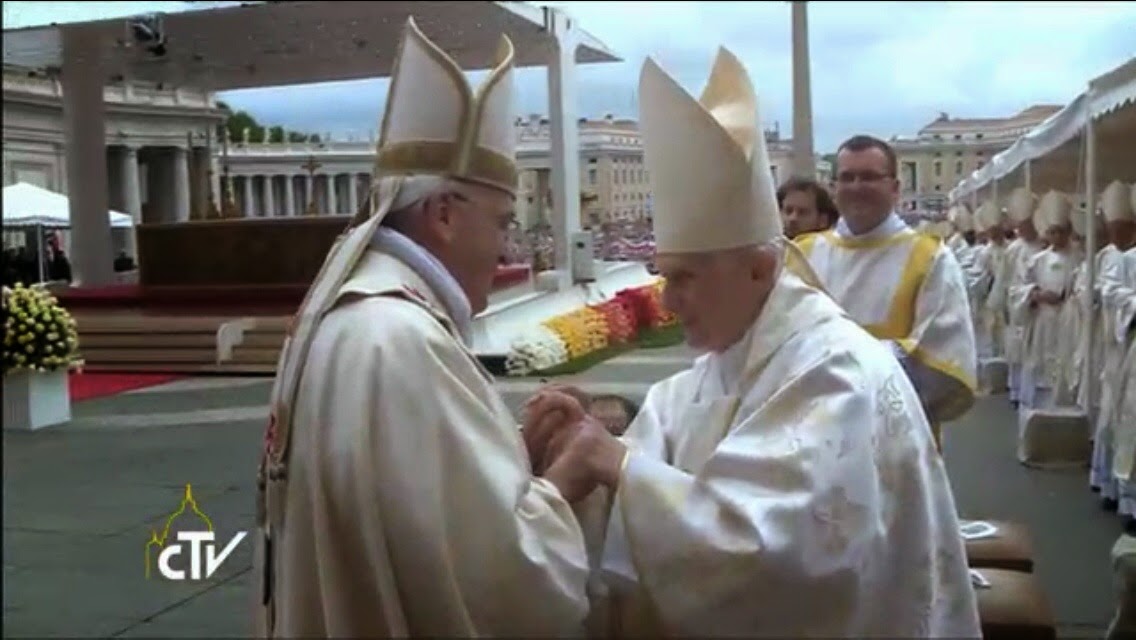 The only thing that would have made this better would have been for Saint Peter, the first pope, to have his relics present as he was present at the Mass I concelebrated with Pope Francis for the Closing of the Year of Faith, when His Holiness held the cask containing the bones of Saint Peter during the chanting of the Creed! It made chills go up my spine.

Go to minute 5:30 when Pope Emeritus Benedict XVI is escorted to his chair prior to the beginning of Mass wearing chasuble and miter!


And from Rorate Caeli, concerning the canonization ceremony in which Pope Benedict is present:

A reminder about today's canonization ceremony

The canonization ceremony of October 21, 2012 saw the introduction of a revised rite that was very similar to the one used prior to Pius XII. Rorate noted this reform on that very same day. This rite will be used today, although the Te Deum will be replaced with a shorter hymn (Iubilate Deo, Cantate Domino).
This reform attracted little attention; the ephemeral restoration of the fanon got far more media space. This does not change the fact that the new rite of canonization may well go down as one of Pope Benedict XVI's more far-reaching reforms, not least because it includes the following petition (the third one), addressed to the Pope just before he proclaims the actual formula of canonization:

Most Holy Father, Holy Church, trusting in the Lord's promise to send upon her the Spirit of Truth, who in every age keeps the Supreme Magisterium free from error, most earnestly beseeches Your Holiness to enroll these, her elect, among the saints.

Prior to the third petition, in his response to the second petition, the Pope says:

Let us, then, invoke the Holy Spirit, the Giver of life, that he may enlighten our minds and that Christ the Lord may not permit his Church to err in a matter of such importance.

These two formulae, or any formula more or less explicitly saying the same things, were present neither in the post-1969 rite of canonization, nor (to our knowledge) in the rites of canonization prior to the main liturgical reforms of the 1960's. Anyone can see the significance of these little formulae to the continuing question of the infallibility of canonizations -- the act of canonization is now explicitly included in the immunity of the Supreme Magisterium from error.
Some will protest that these words do not amount to an Apostolic Constitution, or a dogmatic tome, or an infallible decree spoken by the mouth of the Holy Father himself. Fair enough; but they are part of the liturgy of canonization, these words "puts into context", so to speak, the formula of canonization that the Pope is about to pronounce. One can even say that these remind him of the extent of his authority just before he exercises it. These two formulae therefore cannot be lightly dismissed, and any future critique of the canonizations of John XXIII and John Paul II will have to take these into account. 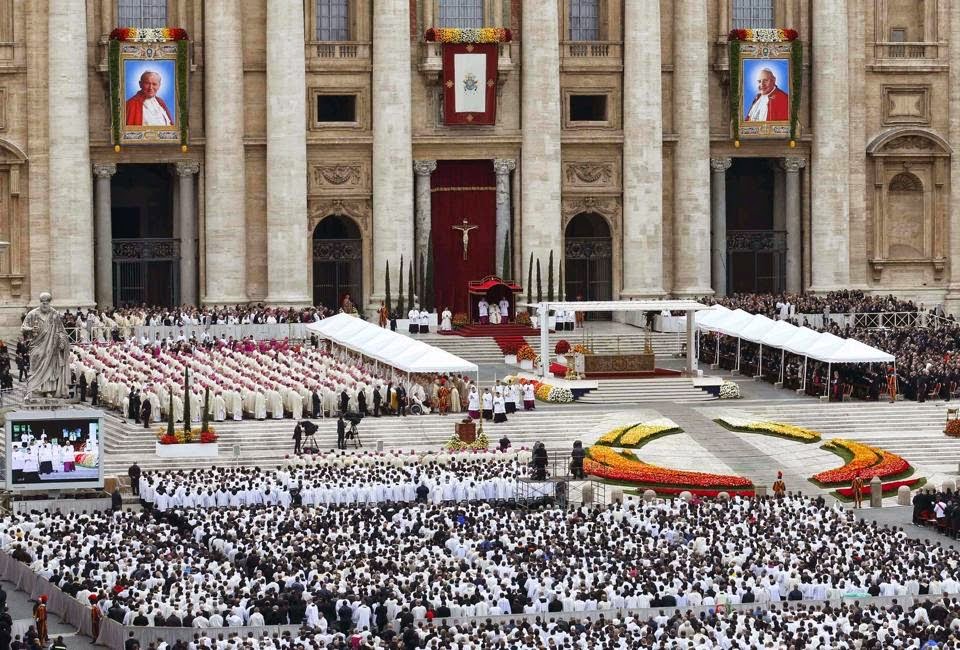 HOMILY OF POPE FRANCIS
CANONIZATION OF SAINTS JOHN XXIII AND JOHN PAUL II
SECOND SUNDAY OF EASTER (OF DIVINE MERCY)
ST PETER'S SQUARE
27 APRIL 2014
At the heart of this Sunday, which concludes the Octave of Easter and which John Paul II wished to dedicate to Divine Mercy, are the glorious wounds of the risen Jesus.

He had already shown those wounds when he first appeared to the Apostles on the very evening of that day following the Sabbath, the day of the resurrection. But, as we heard, Thomas was not there that evening, and when the others told him that they had seen the Lord, he replied that unless he himself saw and touched those wounds, he would not believe. A week later, Jesus appeared once more to the disciples gathered in the Upper Room, and Thomas was present; Jesus turned to him and told him to touch his wounds. Whereupon that man, so straightforward and accustomed to testing everything personally, knelt before Jesus with the words: “My Lord and my God!” (Jn 20:28).

The wounds of Jesus are a scandal, a stumbling block for faith, yet they are also the test of faith. That is why on the body of the risen Christ the wounds never pass away: they remain, for those wounds are the enduring sign of God’s love for us. They are essential for believing in God. Not for believing that God exists, but for believing that God is love, mercy and faithfulness. Saint Peter, quoting Isaiah, writes to Christians: “by his wounds you have been healed” (1 Pet 2:24, cf. Is 53:5).

Saint John XXIII and Saint John Paul II were not afraid to look upon the wounds of Jesus, to touch his torn hands and his pierced side. They were not ashamed of the flesh of Christ, they were not scandalized by him, by his cross; they did not despise the flesh of their brother (cf. Is 58:7), because they saw Jesus in every person who suffers and struggles. These were two men of courage, filled with the parrhesia of the Holy Spirit, and they bore witness before the Church and the world to God’s goodness and mercy.

They were priests, bishops and popes of the twentieth century. They lived through the tragic events of that century, but they were not overwhelmed by them. For them, God was more powerful; faith was more powerful – faith in Jesus Christ the Redeemer of man and the Lord of history; the mercy of God, shown by those five wounds, was more powerful; and more powerful too was the closeness of Mary our Mother.

This hope and this joy were palpable in the earliest community of believers, in Jerusalem, as we read in the Acts of the Apostles (cf. 2:42-47), as we heard in the second reading. It was a community which lived the heart of the Gospel, love and mercy, in simplicity and fraternity.

This is also the image of the Church which the Second Vatican Council set before us. John XXIII and John Paul II cooperated with the Holy Spirit in renewing and updating the Church in keeping with her pristine features, those features which the saints have given her throughout the centuries. Let us not forget that it is the saints who give direction and growth to the Church. In convening the Council, John XXIII showed an exquisite openness to the Holy Spirit. He let himself be led and he was for the Church a pastor, a servant-leader, led by the Spirit. This was his great service to the Church; he was the pope of openness to the Spirit.

May these two new saints and shepherds of God’s people intercede for the Church, so that during this two-year journey toward the Synod she may be open to the Holy Spirit in pastoral service to the family. May both of them teach us not to be scandalized by the wounds of Christ and to enter ever more deeply into the mystery of divine mercy, which always hopes and always forgives, because it always loves.
Posted by Fr. Allan J. McDonald at Sunday, April 27, 2014

What a fantastic moment in Catholic history. Why would anyone want to be a Protestant?!??!?!?!?