NO APRIL FOOLS! THE ARCHBISHOP OF ATLANTA PUBLICLY APOLOGIZES FOR BUILDING A $2.2 MILLION MANSION EXCLUSIVELY FOR HIMSELF IN THE MOST EXCLUSIVE AREA OF ATLANTA

Archbishop Wilton Gregory may sell his yet to have been moved into $2.2 Mansion with 6000 square feet built for him alone as well as parties he might throw and guests he might have: 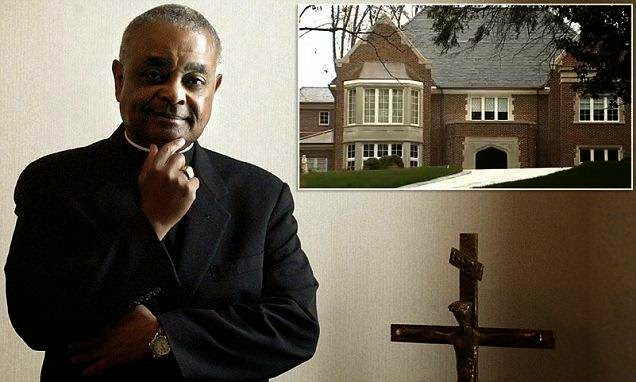 You can read his complete article and apology from the Georgia Bulletin, the Archdiocesan Newspaper by pressing this SENTENCE!

Archbishop Wilton Gregory quotes part of one of the many, many letters of complaint that he received:

“We are disturbed and disappointed to see our church leaders not setting the example of a simple life as Pope Francis calls for. How can we instill this in our children when they see their archdiocesan leadership living extravagantly? We ask you to rethink these decisions and understand the role model the clergy must serve so the youth of our society can answer Jesus’ call. Neither our 18- or 14-year-old sons understand the message you are portraying.”

Archbishop Gregory also observes what he failed to observe:

Even before the phenomenon we have come to know as Pope Francis was elected to the Chair of Peter, we Bishops of the Church were reminded by our own failings and frailty that we are called to live more simply, more humbly, and more like Jesus Christ who challenges us to be in the world and not of the world. The example of the Holy Father, and the way people of every sector of our society have responded to his message of gentle joy and compassion without pretense, has set the bar for every Catholic and even for many who don’t share our communion.

If it is the will of these trusted representative groups, the Archdiocese will begin the process of selling the Habersham residence. I would look to purchase or rent something appropriate elsewhere.

MY COMMENTS: With Pope Francis penitential, sober and austere papacy, I am reminded of the bishop who ordained me, who became one of the youngest bishops in our country when he was assigned to the Diocese of Savannah in 1974, Bishop Raymond W. Lessard. He retired in 1995 and then went to work as a professor at St. Vincent de Paul Seminary in Boynton Beach, Florida, where now in his 80's he continues to serve there.

He truly lived a simple life, only had one (what I thought was ugly even at the time) modern, short miter, a very simple wooden crozier and would only wear cheap, lightweight vestments. He did wear the various apparel of the bishop in terms of the house and formal cassock and aureola.

He lived in two large rooms of the second floor of the Cathedral rectory but had a getaway in a small bungalow at Tybee Island which had a connected but separate spacious room and bathroom for priests to use.

When the diocese was given a rather beautiful home on the Isle of Hope, which had to be moved from its original land to a very expensive piece of property owned for decades by the diocese as a summer camp, before it became an exclusive piece of real estate, worth multi-millions of dollars now, he was offered to keep it has his retirement home overlooking the Bull River and a spectacular view of the Savannah marshes.

He chose rather to give it to the new bishop and have a much smaller, sober three bedroom ranch house across from the main gate of "Camp Villa Marie" on a dirt road there, with no water or marsh views.

Some may...surely will...disagree, but I think that Pope Francis could improve his credibility if he would "put His money where His mouth is" and hire Sotheby's to have a GIANT auction, in St. Peter's square. There is no need for "The Church" (not sure precisely where ownership rests) to own millions...probably billions in antiques, art, gold, jewels, etc., etc.....

This argument is as old as the hills. While I am not impressed with Francis' aggressive "look at me" poverty/humility show, the treasures of the Church do not belong to the pope. They belong to the Church, including the millions of people who visit the Vatican every year and enjoy looking at many of these historical artifacts.