AT THE THRESHOLD OF GLOBAL PERSECUTION OF THE CATHOLIC CHURCH 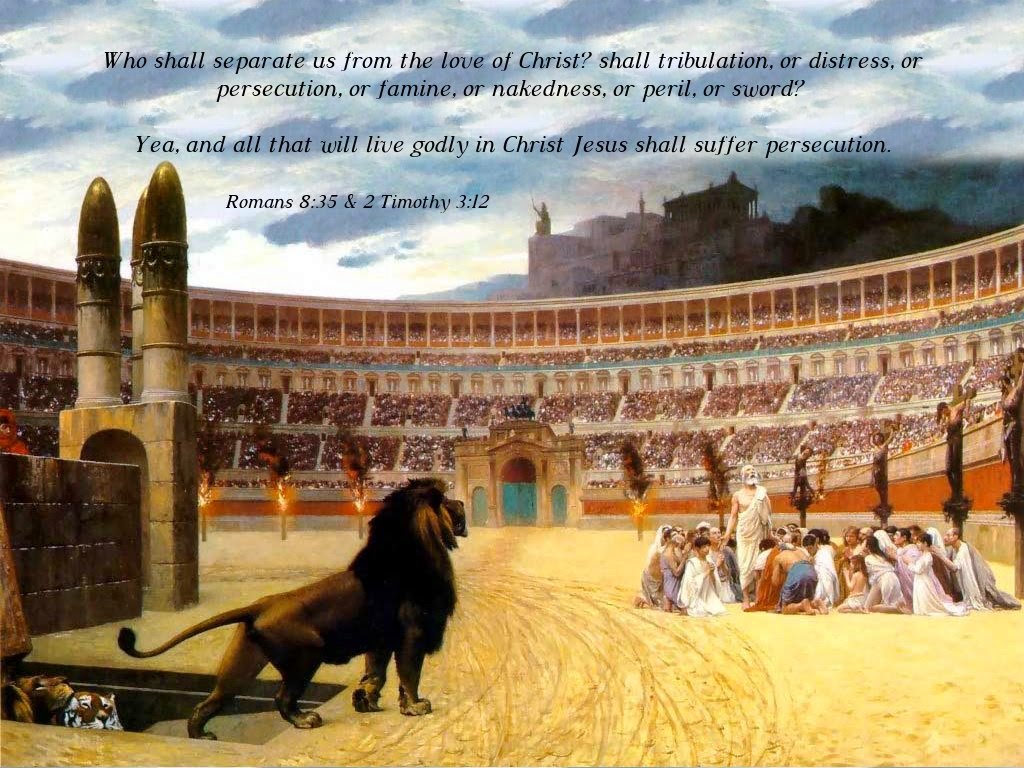 If you are a political activist who happens to be a Catholic who believes as Pope Francis, every other pope and the entire Catholic Church has taught from the beginning, that marriage is a Sacrament between one man and one woman and for a lifetime, be ready to sacrifice your career!

The fascists in the gay-rights movement want blood and they are getting it. They don't care about your religious beliefs or that as a Catholic you have a right to bring those beliefs to the public square. If you do, you will be persecuted, maligned and sent to the periphery and without a job.

How well prepared are believing, practicing Catholics to face this kind of persecution?

This is what Pope Francis wrote in his exhortation, "The Joy of the Gospel":

The process of secularization tends to reduce the faith and the Church to the sphere of the private and personal. Furthermore, by completely rejecting the transcendent, it has produced a growing deterioration of ethics, a weakening of the sense of personal and collective sin, and a steady increase in relativism. These have led to a general sense of disorientation, especially in the periods of adolescence and young adulthood which are so vulnerable to change. As the bishops of the United States of America have rightly pointed out, while the Church insists on the existence of objective moral norms which are valid for everyone, “there are those in our culture who portray this teaching as unjust, that is, as opposed to basic human rights. Such claims usually follow from a form of moral relativism that is joined, not without inconsistency, to a belief in the absolute rights of individuals. In this view, the Church is perceived as promoting a particular prejudice and as interfering with individual freedom”.[59] We are living in an information-driven society which bombards us indiscriminately with data – all treated as being of equal importance – and which leads to remarkable superficiality in the area of moral discernment. In response, we need to provide an education which teaches critical thinking and encourages the development of mature moral values.

The Huffington Post  | by  Taylor Casti
Brendan Eich, the newly named CEO of the software firm Mozilla Corporation, resigned from the post after angering gay rights activists and some in the tech industry for his opposition to same-sex marriage.
Eich's views on gay marriage came to light in the days following his appointment last week to run Mozilla, best-known for its Firefox browser. News re-emerged of a $1,000 donation he made in 2008 supporting California's Proposition 8, an anti-gay marriage referendum.
Since then two former Mozilla developers and the dating site OKCupid, among others, have publicly condemned the software development firm for appointing a known supporter of the anti-gay law -- voters passed Prop 8, but it was later shot down by the Supreme Court. Critics urged that web users try a different browser.
Mozilla initially tried to bat away concerns about Eich's ideology .
The company explained in a blog post on Thursday:


We didn’t act like you’d expect Mozilla to act. We didn’t move fast enough to engage with people once the controversy started. We’re sorry. We must do better.
Brendan Eich has chosen to step down from his role as CEO. He’s made this decision for Mozilla and our community.
Mozilla believes both in equality and freedom of speech. Equality is necessary for meaningful speech. And you need free speech to fight for equality. Figuring out how to stand for both at the same time can be hard.
Our organizational culture reflects diversity and inclusiveness. We welcome contributions from everyone regardless of age, culture, ethnicity, gender, gender-identity, language, race, sexual orientation, geographical location and religious views. Mozilla supports equality for all.
We have employees with a wide diversity of views. Our culture of openness extends to encouraging staff and community to share their beliefs and opinions in public. This is meant to distinguish Mozilla from most organizations and hold us to a higher standard. But this time we failed to listen, to engage, and to be guided by our community.
While painful, the events of the last week show exactly why we need the web. So all of us can engage freely in the tough conversations we need to make the world better.
We need to put our focus back on protecting that Web. And doing so in a way that will make you proud to support Mozilla.

While there is no clear replacement in line for CEO, Mozilla executive chairwoman Mitchell Baker insisted that the company is not without options, saying in an interview this morning that "[t]here are certainly very talented people we have talked to, so we are not at ground zero by any means."
Posted by Fr. Allan J. McDonald at Friday, April 04, 2014

I don't think we have to worry about the pope and bishops being persecuted for upholding the Faith. That is one thing I won't loose sleep over.

The church has nothing to fear. For the last 50 years the Faith has not been taught. The result is that the majority of people who identify as "Catholic" are anything but a Catholic. Worldwide apostasy, unseen in the 2000 year history of the Church is the result of clergy and religious purposefully destroying the Faith of millions since Vatican II. And it keeps going on. Nobody cares what the Church used to teach. And the bishops do not uphold the truths of the Faith. They will be the first to march in a gay pride parade. That is why it's laughable for the media to portray the Catholic Church as this bastion of rules and faithfulness to doctrine, it is anything but that these days. That portrayal is right up there with them showing nuns in habits and priests wearing a collar buttoned and combed hair. The Church has been reduced to a haven of pedophiles and perverts and heretics. And the future looks dismal. This isn't being negative, it seeing reality clearly and without a filter.

The West conquered slavery, fascism, communism, various diseases and other evils. Given this history, I'm confident that one day we will recognize just how offensive the present immoralities are to human dignity, and then put an end to them.

The sky fell many decades ago and you don't even realize it.

What is the fruit of the last 50 years? Did Mass attendance rise or plummet? Did vocations increase or become dangerously low? Has the Faith of the laity increased or is it totally gone? To pretend that the Church is not at a crisis point is delusional.

The West has conquered neither slavery, Fascism, or Communism. Minorities are still slaves on the Democratic welfare plantation and they perform for Massa on playing fields and basketball courts all over the country. There is a Fascist in the whitehouse, and most of our "progressive" reforms are based upon a Communist paradigm. Who are you kidding?

Hey, Anonymous at 8:56 - What has happened outside the Catholic Church in the last 50 years? Have there been declines in attendance at other Churches, Mosques, Synagogues, Temples, Meeting Houses? Yep.

Has there been a drastic increase outside the Catholic Church in divorce, cohabitation, "serial monogamy?" Yep.

This is not a Catholic Church crisis. It is a crisis in western culture.