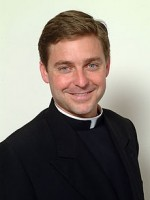 Yesterday as I drove from Macon to Augusta I listened to Catholic Radio's Fr. Jonathan Morris. His show was on how the Church deals with issues of same sex marriage and the children these couples have and then want to have them baptized.

How do you deal with Catholic homosexuals who want to participate in the Church but completely reject the Church's dogmas on sexual morality? And not only that, but on the natural ways to conceive children and who reject that their children should have one father and one mother?

Then Fr. Jonathan revealed that his sister, with whom he is very close, is a lesbian (although he doesn't like that term to describe a person since we are more than our sexual attractions) who has "married" in a civil ceremony her partner in Washington, DC.

When these couples have children through artificial insemination, with surrogate mothers or simply adopt, should these children be denied baptism?  Church canon law states that there must be a reasonalbe hope that the children will be reared as Catholics.

I have had a few of these circumstances. One was unknown to me, in that I didn't know that the baby being baptized was the child of a lesbian couple. This was when I was first ordained. But the child was brought up Catholic.

I've inherited some of these situations and often the grandparents who are practicing Catholics are doing everything in their power to make sure their grandchildren are brought up Catholic and are enrolled in CAtholic school.

Should children, no matter how they are conceived or who adopts them be punished for the sins of their parents and denied baptism and a Catholic education?

I tend to have hope for children in these situations and empathy for them and in no way want to become for them a stumbling block to Christ. I hope more in God's grace rather than despair about our sins and sacrileges.

But back to Fr. Jonathan. He is a conservative, orthodox Catholic priest. He has a "married" lesbian sister. They are still close. He says he disagrees with her lifestyle and her marriage but he still loves her and they still communicate despite their differences and her immorality

How many of us have good friends or siblings who are heterosexual, yet very promiscuous fornicators or adulterers and flaunt it, who aren't married in the Church but living with many significant others?. How many cut them off and how many stay close to them?.
Posted by Fr. Allan J. McDonald at Monday, April 14, 2014

One wishes those with deviant sexual desires, such as the various fetishes and the two homosexualities, would feel sufficient shame to just keep it to themselves. If a man frequently succumbs to internet pornography, or a woman succumbs to homosexuality, or whatever, why announce the fact to the world?

Certainly, friendship should be maintained with such unembarrassed people, provided the friendship is not destructive. This could one day open the path to repentance and conversion, or at least some shame.

One hopes that Fr Morris didn't attend the civil ceremony.

John I doubt that he did and I got the impression listening to him yesterday on the radio that he didn't.
But that raises another good question. I know that in pre-Vatican II times and certainly shortly after the Council that Catholics were forbidden to attend weddings of Catholics that were invalid because these were second marriages outside the Church or simply were outside the Church even if no impediment was present. Many parents refused to go to their own children's weddings.

Today this would be so politically incorrect and Catholic parents who did this and certainly it would be very public would be harshly judged by their friends, aquaintances and those who don't know them.

So that is another question, how many practicing Catholics would go to a same sex wedding ceremony of their siblings or relative or friend or of a Catholic who is not getting married in the Church. That would be an interesting survey today compared to when we didn't participate in the sins of relatives and friendships previous generations.

The Church should be unyielding on these issues but will not be. She will give in more and more in little ways until…*POOF*…all gone!

I must run into a lot more liars than the average Catholic. What would be the reasonable hope that child in that situation would be raised Catholic? I think it would be more likely the child would be raised as an Inuit given the once in a decade snow storms in Atlanta. Those storms, at least, can't be stopped from happening however infrequently while the parents can actively undermine the spiritual growth of the child every day.

The Synod on the family will settle some of the debates ongoing now. Although, it is difficult to imagine that Church teaching can be changed on marriage or other like issues.

Vatican I teaches that the Pope speaks infallibly only when he teaches consistent with settled doctrine. So, to teach novelty on a sacrament like marriage would raise the possibility of schism. The majority of the Cardinals would not go along with such new teaching.

Hey, Anon 2, did you catch that your boy Obama invited the first openly gay Episcopal Bishop to say the Easter prayer at the White House? Aren't you happy and all warm and fuzzy?

Well, of course, I am absolutely tickled pink.

Seriously, though, I have just been discussing Humane Vitae with the students in my Islamic Law in Comparative Context course (we compare the Shari‘a with American Law and with Catholic theology and moral teaching). It is very clear from reading Humane Vitae that the Catholic Church combines a strict approach in magisterial teaching with great compassion for the circumstances of individuals.

Today was contraception. Wednesday is abortion. Next week we will look at homosexuality among other topics under Shari'a criminal law. By the way, if you really want to be tough on those guilty of "sexual crimes", Gene, perhaps you should become Muslim =).

Indeed so. It makes me wonder why you bleeding hearts love the Muzzies so much.

Gene, As long as you keep wondering, I have hope. Let me know when you have figured it out.

Oh, and Gene: Who was the original “bleeding heart”? Think about it.

Anon 2, please. So now you are comparing whiney libs and Obama voters to Christ. Grandiosity, anyone?
There is nothing to figure out. Academics and libs who want to introduce Muslim law or base US legal reforms upon it are crazy, delusional, and a danger to all of us. We need a swing to the right in this country that would make Francisco Franco look like Mr. Rogers.

Oh, clearly there_is_much to figure out, Gene. You are sooo far off base. I neither expressed nor hold any of those views. You are projecting your own bogeymen again.

Father McDonald,
Your question is unfortunately one-sided and implies that those disgusted by the sodomite sin are the ones guilty of severing relationships with friends and family. I know you didn’t intend that, but I think the way you phrased your question demonstrates how we are made to feel guilty about believing that homosexuality is an intrinsic evil. My personal experience is an example of how my homosexual brother severed his relationship with me his hetero brother. The reverse outcome of how you worded your question. What is true is that I’m mostly relieved about it. For nearly 20 years occasionally we discussed the subject. I stopped talking to him about it because I noticed that he was dishonest about his willingness to listen to orthodox Catholic teaching. He loved to cling to false Catholic teaching . But when I had caught and taped an interview of Bishop Bruskewitz on EWTN, who of course gave the authentic teaching and sent it to him he claimed that didn’t watch it. It was at that point that I gave up trying to persuade him and that was my fault.
As the years went on, what I noticed and annoyed me, is that he would attempt to introduce his lifestyle to me (by mentioning his lover’s name in our conversations, sneaking photographs of his gay friends in stacks of pictures for me to discover etc.) in hopes that somehow he would wear me down and I would come to accept his sin. I think that most family members of homosexuals wrongly, in order to keep peace, accept the sin as normal behavior. But in cases like mine I think that it’s frequently the gay family member who often is the one who turns his/her back in anger when the person doesn’t get the sin sanctioned by the recalcitrant Catholic radicals.

"Should children, no matter how they are conceived or who adopts them be punished for the sins of their parents and denied baptism and a Catholic education?"

I think a reasonable accommodation
and solution can be found. Every situation is different. Perhaps
a CCD version of homeschooling would work. You cannot end up with situations where people would see a contradiction or conflict between what the Catholic Church teaching is on marriage and a kind of implicit or seeming acceptance of someone's same sex relationship - a scenario which could
come about if the child is enrolled in the local Catholic schools. It would be good to check and see what the experience is elsewhere with these kind of situations to use as a guide.
We have to be cognizant of what effect this would have on the religious formation of other children. I know that couples disobey Church teaching when it comes to say, contraception, but that is not something out front and public. Perhaps what happened in Charlotte was a wake up call.
One can only hope.

I think one should look at the damage homosexual emancipation has done and is doing to western civilisation.

We make an incredible mistake when we claim human beings come in two categories - heterosexual and homosexual. We do not. Homosexuality is a deviant behaviour not an identity. Homosexual is a construction built around that disorder.

To think that the right of of children to a mother and mother can be legally suppressed due to a disordered sexual behaviour is astounding.

But then, children are always the victims.

Gays, "married," or not, should not b llegally allowed to adopt, by canon, or state, law.