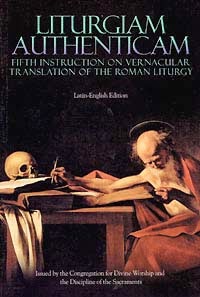 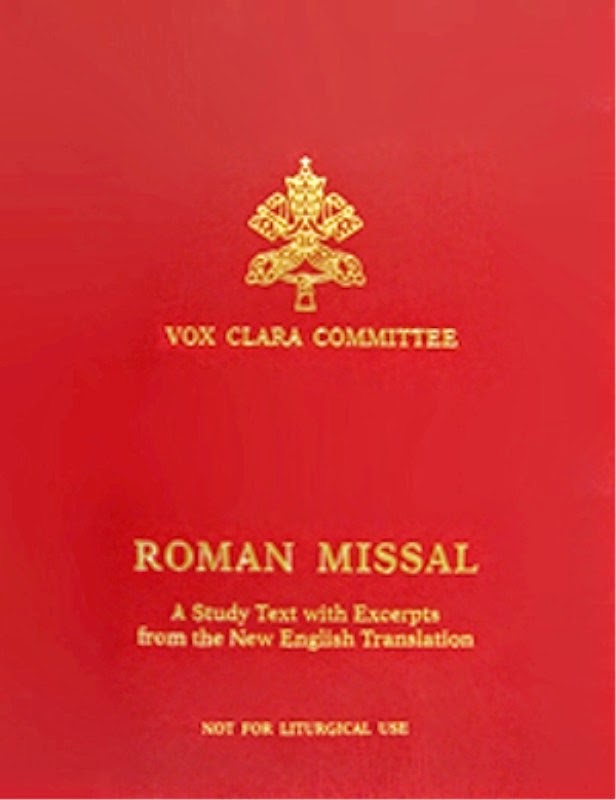 While another blog commissions a survey on how well the new and glorious translation of the English Mass is being received by the clergy, with the younger clergy and those of us young at heart overwhelming approving of it and appreciating what it has accomplished for the English speaking world, that same blog which has from before it was promulagated to be used derided it and thought Pope Francis would overturn it and go back to some vague "equivlant" form of translating the sacred Latin into English.

Of course there is delusion, pride and denial here to say the least. Pope Francis this past October 18th, what would have been my mother's 94th birthday, but also the Solemnity of Saint Luke, praised to the nth degree the post Liturgiam Authenticam, Vox Clara work of the International Committee on English in the Liturgy. READ FOR YOURSELF and don't rely on any "equivalent" translations of this speech to influence you over the literal translation below! Obviously Pope Francis embraces Liturgiam Authenticam and Vox Clara!

ADDRESS OF POPE FRANCIS
TO MEMBERS OF THE INTERNATIONAL COMMISSION
ON ENGLISH IN THE LITURGY  (ICEL)
ON THE OCCASION OF ITS 50TH ANNIVERSARY
Hall of the Popes
Friday, 18 October 2013

My Brother Bishops,
Dear Friends,
I welcome the members and staff of the International Commission on English in the Liturgy as you gather in Rome to celebrate the fiftieth anniversary of the Commission’s establishment. I thank Archbishop Arthur Roche, Secretary of the Congregation for Divine Worship and the Discipline of the Sacraments, and a former President of ICEL, for presenting you. Through you, I send greetings and the expression of my gratitude to the Conferences of Bishops which you represent, and to the consultors and personnel who cooperate in the ongoing work of the Commission.

Founded as part of the implementation of the great liturgical renewal called for by the Second Vatican Council’s Constitution on the Divine Liturgy, ICEL was also one of the signs of the spirit of episcopal collegiality which found expression in the Council’s Dogmatic Constitution on the Church (cf. Lumen Gentium, 22-25). The present anniversary is an occasion for giving thanks for the work which the Commission has accomplished over the past fifty years in providing English translations of the texts of the liturgy, but also in advancing the study, understanding and appropriation of the Church’s rich sacramental and euchological tradition. The work of the Commission has also contributed significantly to that conscious, active and devout participation called for by the Council, a participation which, as Pope Benedict XVI has rightly reminded us, needs to be understood ever more deeply "on the basis of a greater awareness of the mystery being celebrated and its relation to daily life" (Sacramentum Caritatis, 52). The fruits of your labours have not only helped to form the prayer of countless Catholics, but have also contributed to the understanding of the faith, the exercise of the common priesthood and the renewal of the Church’s missionary outreach, all themes central to the teaching of the Council. Indeed, as Blessed John Paul II pointed out, "for many people, the message of the Second Vatican Council was perceived principally through the liturgical reform" (Vicesimus quintus annus, 12).

Dear friends, last evening you celebrated a solemn Mass of thanksgiving at the tomb of Saint Peter, beneath the great inscription which reads: Hinc una fides mundo refulget; hinc unitas sacerdotii exoritur. By enabling the vast numbers of the Catholic faithful throughout the world to pray in a common language, your Commission has helped to foster the Church’s unity in faith and sacramental communion. That unity and communion, which has its origin in the Blessed Trinity, is one which constantly reconciles and enhances the richness of diversity. May your continuing efforts help to realize ever more fully the hope expressed by Pope Paul VI in promulgating the Roman Missal: that "in the great diversity of languages, a single prayer will rise as an acceptable offering to our Father in heaven, through our high priest Jesus Christ, in the Holy Spirit".
To you, and to all associated with the work of the Commission, I cordially impart my Apostolic Blessing as a pledge of abiding joy and peace in the Lord.

I'm looking forward to their translation of the breviary. I hope they restore the older Glory Be translation.

Father McDonald,
You give too much attention to the crackpots over at PTB. Crackpots is the term they allowed to be used to describe people participating in an EF Mass. It's best to ignore the misguided "intellectuals" on that site and I would recommend that any person who loves the true Catholic faith not to waste time with the PTB crackpots. It only offers them a legitimacy they hunger for.