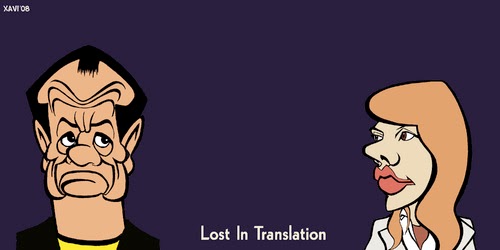 I wonder how many rank and file Catholics really despise the new and glorious English translation of the Mass? To be honest with you, no one has complained to me about the intelligibility of our English Mass.

Yes, and I have said this over and over and over again, future revisions of the Roman Missal in English might tweak some of the prayers. This was done over the years with the inglorious English translation laid to rest about three years ago now.

Academics think their concerns are the most important. So when you read this, keep that in mind. Catholic academics are some of the worst clericalists in the world; they think they know better than anyone else and are used to grading people, but hate being graded themselves. Tenure gives them that advantage.

But here is Praytell's take on the on-going controversy of the new English translation. Clericalism is alive and well in that it really focuses on the priests who are whining the most. PRESS HERE.

How many of you guys are at your absolute wit's end about the new and glorious translation of our English Mass? Never mind that you are trying to earn a living, put food on your table, clothe and educate your kids,  live righteously and pay your tithes. What is really the most important thingy in your Catholic life, certainly it must be revising the new and glorious English translation of the Mass.

HERE'S CLERICALISM REVEALED TO ALL TO SEE IN THE LIGHT FROM THIS SURVEY OF PRIESTS:

The study reveals some disturbing trends about the trust Catholic clergy place in Church leadership.

At my wit's end? Hardly! The only person I know who prattles on and on and on about PrayTell and the legitimate concerns expressed there is...YOU!

It is generally thought that that devotion to more reverent and formal liturgy correlates with the ages of clergy, and that liturgical formation in many seminaries has been emphasized more in the last couple of decades than in the preceding ones. Aside from the fact that I've never personally heard a negative lay comment on the new translation, all the younger priests I know are happy with it, though I've heard of some older ones who are not.

I don’t want to get embroiled in an argument about the translation, especially as I am no scholar on the matter of Biblical and liturgical translation, but I wonder if a good working principle is the following: Choose a translation that comes closest to whatever the relevant original text is and is at the same time comprehensible.

As a general matter, it would seem that a translation using the approach of “formal equivalence” would come closer to the original than a translation using the approach of “dynamic equivalence” (unless the translator is somehow able to perform the Herculean task of accessing the complete context of the original and then convey this in the words chosen). The new translation seems to use the former principle. Of course, comprehensibility may be another matter.

It would be interesting to note who answered and what age groups answered what. I was not polled! Imagine that!

I suspect priests PI's age and older are the ones whining the most about process--process--process--authority in other words and that ultimately it is not the academics who hold the authority or the rank and file clergy of the Church, but in matters of liturgy, the bishops and the Bishop of Rome.
The actual translation is but a straw man; the real issue is, do liturgists have the ultimate authority of the liturgy, like the ones who came up with the 1998 translation or do the bishops? Only coloring book Catholics think the liturgists do.

Remembner that bumper sticker, "If You Don"t Like Police, Next Time You Are In Trouble Call A Hippie."

I have one, "If You Don't Like The Catholic Church, Next Time You Need A Priest Call Ignotus." LOL!

I'm most displeased with the new English translation, with all it's "formal equivalence" mumbo jumbo. Dynamic equivalence from Latin into Shakespearean, or even Dickensian, or heck, even P.G. Wodehousian English would have been more to my liking. I'm with PrayTell and Pater Ignotus on this one.

Who are these liberal priests trying to fool? I know they think the laity is stupid, but this is beyond even their arrogance. They didn't follow the words of the old translation that they say they love so much. They changed words, phrases, added things, omitted others. It's called clericalism. A bunch of arrogant men who couldn't make it own their own in the world who constantly whine about rules and how big bad Rome is stopping their creative flow.

Good Father - Last time I checked you were older than I......

Yes I know what I am talking about!

"Who are these liberal priests trying to fool?" It's hard not to feel sorry for them. They're like those Imperial Japanese soldiers still holding out on remote islands in the 1970's, not knowing the war was long over, and that everyone was living happily in peace.

There is a common theme which is taken up by many who don't like the current translation; namely that the rejected 1998 Sacramentary was a thing of beauty and a joy for ever. Liturgy should sing, claims Rita Ferrone, and she gushes over the following, which was the 1998 version of that ancient hymn, the Exsultet.

'Exult and sing, O shining angel choirs!
Exult and dance, bright stars and blazing suns!
The first-born of creation, Jesus Christ,
Is ris'n in radiant splendour from the dead!

Now, as far as poetry goes, you might think that this is worthy of Gerard Manley Hopkins (I don't), but it ain't what it claims to be, the Exsultet. I have only heard the Exsultet sung in Latin, to its ancient and beautiful chant, but when the 2011 translation appeared I downloaded it and sang it through. The chant needed hardly any alteration, and it works!

There is a good case for always singing this in Latin, given its antiquity and importance. There is a ninth-century illustration from the abbey of Monte Cassino showing the Paschal candle and the deacon singing the Exsultet from a long scroll, and to see and hear the same thing twelve centuries later (same words, same melody) reminds you of what it means to be a Catholic.

I cannot for the life of me understand why anyone would consider replacing this with a piece of doggerel which can't be chanted (which of course is the point - if sung, it would have to be set by Paul Inwood or another of the Haagen-Dasz school of liturgical muzak).

Among other things we have been spared is the input of the English Language Liturgical Consultation, which would have had us praying in the Our Father 'do not bring us to the time of trial' (Old Bailey, anyone?) and which rendered 'et homo factus est' as 'and became truly human'. Yet the same people who could recite this without retching throw a fit about saying 'consubstantial'.

Oh, and Henry - how come PrayTell still allows you to comment? Is there something between you and Rita we don't know about?

Unless I read this incorrectly, it looks like a good thing. I would probably disregard AT LEAST 50% of the current clergy if I was trying to repair the Missal.

Just one, but I find this topic so out-of-date that I thought I'd stir things up a bit just to keep it interesting! That said, I wonder how a more Elizabethan-era (perhaps I should say "Douay Rheims-era") style of translation would have been received. Something like the way the Our Father is still translated.

I liked the current translation from the first time I set eyes on it.

JBS you have set my heart aflutter. I hope you are joking!

Cameron, be not afraid. JBS is as stalwart as it gets. But sometimes his tongue does get a bit droll in cheek.

If the groovy liturgists of the '70s had the rationale of wanting a translation that was more relevant or with the times, then they adopted a self-defeating position. Times change. Thus the arguments that they could use to support a new translation would, in time, inevitably be used to demolish that translation for being too much a thing wedded to a specific time--the groovy '70s.

The times were one of theologically and linguistically incorrect ideas.
At least as far as the English version of the Mass goes, the times they are a'changin. And the groovy liturgists don't know how to cope other than to become absolutists and claim that their translation was timeless. And if they expected us not to notice the switch, or to buy their new arguments, then, as the saying goes, either they're fools or they think we are. Or both.

Speaking as a layman, I quite like the new translation.

My 1990 Solesmes Gregorian Missal (still essential for those who attend Sung Mass in the Ordinary Form) has the old translation. Although it uses English spelling, e.g. 'Saviour' and 'worshipped' since this is the spelling that Europeans are taught, the text is not quite the same as that used in England and Wales up until 2011. I knew the English bishops had insisted on some changes to ICEL 1973 (e.g. 'my sacrifice and yours' in the Orate Fratres) but since I stopped reciting the Creed in English when the ICET version was foisted on us in 1975, I failed to notice a significant difference here as well.

'... by the power of the Holy Spirit he was born of the Virgin Mary, and became man. For our sake he was crucified under Pontius Pilate; he suffered, died and was buried'. [Version in Gregorian Missal]

'... By the power of the Holy Spirit he became incarnate from the Virgin Mary, and was made man. For our sake he was crucified under Pontius Pilate; he suffered death and was buried'. [Version used in England 1975-2011]

This is translated as 'He was crucified also for us, suffered under Pontius Pilate, and was buried'. Surely this is better as well as being more faithful to the Latin. Although the Apostles' Creed adds 'died' (mortuus) it isn't necessary since no-one survived crucifixion.

John Nolan :
I agree. I could even see it as:
'He suffered under Pontius Pilate, was crucified for us,and was buried'

What we have now is better than what came before and so I will gratefully and thankfully accept it.