CHANGE NOTHING, BUT PRESENT THE TRUTH IN A SOFTER FRIENDLIER WAY--WILL THIS APPROACH CHANGE HEARTS? 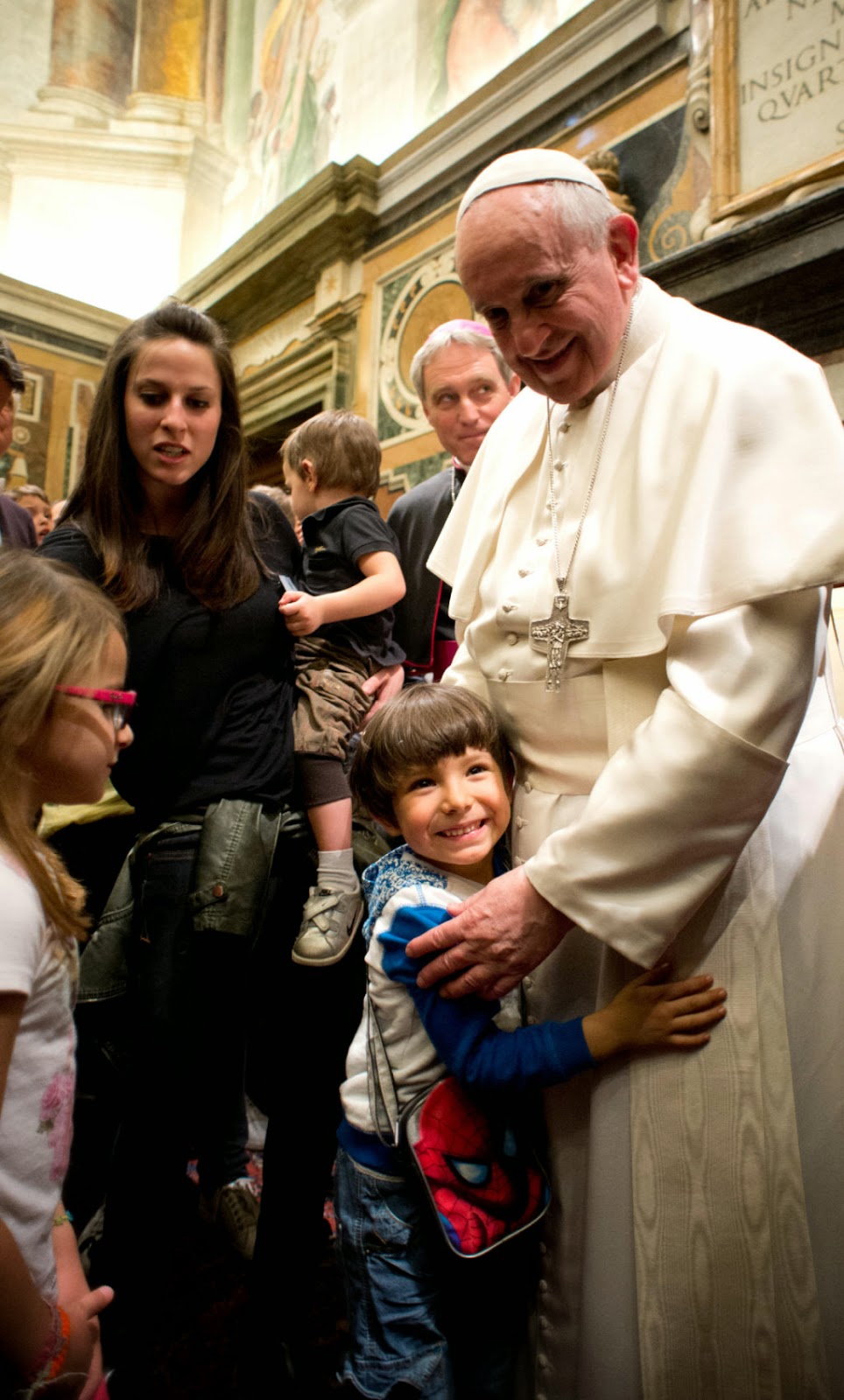 My comments first: The article below that I copy from our Macon Telegraph's Religion Section this Saturday morning, is a paradox of truth and myth. It seems to me that the media is beginning to realize that this Pope isn't going to change any major teachings of the Church (of course they do not know that he can't do such a thing, he has no authority to do so). But they like how he is presenting traditional teachings by "applying those teachings in a loving and caring way."  "Francis still says "no" in a kinder and gentler way."

Some of the myths in the article that the media loves to perpetuate:

1. He drives around the Vatican in a used Renault--no he doesn't! A priest gave it to him like many gifts the pope receives. I suspect it is in a papal Vatican museum or being sold like the motorcycle given to him. But the Holy Father does get chauffeured in a Ford Focus. My mother had one too! A Focus, not a chauffeur.

2. He lives on the second Floor of the Vatican Motel 6. This is true but his offices are still where the old papal apartment is and Pope Francis still spends a good part of the day in the Papal Palace working, but unlike Pope Benedict, he doesn't sleep there. Pope Francis stated the reason he lives at the Motel 6 is that he needs to be surrounded by people, regular people for psychiatric reasons, not to appear poorer than his predecessors.

3. "Who am I to judge" was said in the context of a priest who might have same sex attractions but was trying to follow the Lord and be faithful. That part is never included by the press. Neither do they include his reference to the Catechism of the Catholic Church pertaining to homosexuality which the pope says he endorses, which means he sees homosexuality and its affections as disordered.

5. Of course the Holy Father has been unambiguous about saying no to the ordination of women and even elevating women to be cardinals. Of course he has no authority, none whatsoever, to change the dogma that only men can be ordained and only a man and a woman can actually be married. The reason for this is the dogma that in both the Sacraments of Holy Orders and Holy Matrimony, the spousal relationship of Christ the Bridegroom (bridegrooms are always male for anyone who thinks differently) to the Church as His bride (brides are always female, for anyone who thinks differently) is made sacramentally evident in both sacraments. Thus the basis of family life, both in the institutional Church and in the nuclear family are made clear.

CATHOLICS REFLECT ON THE FIRST YEAR OF PEOPLE'S POPE
By Lornet Turnbull of the Seattle Times, April 12, 2014:

SEATTLE -- In November, the priest at Assumption Catholic Church in North Seattle mailed a letter of welcome to parishioners, including members long dormant -- those divorced and remarried, gay, tired or simply disillusioned.

“We are living in exciting times,” Father Oliver Duggan told them. “Our church, which so many had written off as not relevant in this time and age, has suddenly come to life.”

For this he credited Pope Francis for not only inspiring his own pastoral work but for breathing new life into the Roman Catholic Church. While the new pontiff hasn’t changed church teachings, the father wrote, “he has been applying those teachings in a loving and caring way.”

A year after Cardinal Jorge Bergoglio stepped onto the balcony at St. Peter’s Basilica to present himself to the world as Pope Francis, Duggan’s words stand as testament for many -- Catholics and non-Catholics -- who believe this “people’s pope” has shifted the tone and softened the image of the 1.2 billion-member church.

To be sure, the pontiff’s actions and remarks in his inaugural year -- from challenging trickle-down economic theories, to reforming Vatican bureaucracy to urging church leaders to stop their obsessions over hot-button social issues -- have done nothing to change doctrine.

Francis still says “no,” but in a kinder, gentler way, to some of the church’s more complicated and thorny issues around reproductive rights, sexuality, married priests and women’s role in the church -- issues especially polarizing in the American Catholic church.

In March, while still maintaining the church’s firm position on marriage, he called on its leaders to explore how civil unions might provide health-care and economic benefits for same-sex couples.

“I don’t believe he will change doctrine; that won’t happen,” said Sharon Hanses, 79, a lifelong Catholic and member of St. Paul Cathedral in Yakima, Wash.

“But I do believe he’s changing hearts.”

Almost from the start, the Argentine and first Jesuit pope grabbed the world’s attention for being the most relatable in modern history: tooling about Vatican City in a 30-year-old Renault, washing the feet of female convicts, posing for selfies with visitors to the Vatican.

Francis eschewed the spacious apartments of his predecessors to live instead in a small suite in a Vatican guesthouse.

Named Time Magazine’s Man of the Year in 2013, as well as Man of the Year for the LGBT magazine The Advocate, he is hailed as the most influential world leader on Twitter with more than 3.7 million followers and is the most talked-about person on the Internet.

The first non-European pope in more than 1,200 years, Francis has made strong pronouncements about income inequality and treatment of the poor, and in his homily at a Mass on Ash Wednesday, said the best way to give was to not expect anything in return.

He has spoken out against careerism in the church and the Vatican, and called for a “synod on the family” this fall after ordering a survey of Catholics on a range of social issues -- from same-sex marriage and unwed cohabitation to contraception, and the place of divorced and remarried people in the church.

Perhaps the most quoted words of his papacy, “Who am I to judge?”, have given hope to gay Catholics alienated by the church and have become the rallying cry for students at a Catholic school in Sammamish,Wash., who saw injustice in the December firing of their gay vice principal after he married his husband.

“Personally, I think he’s a saint,” said Stephen Dofelmier of the pope. Dofelmier grew up in the church, left after getting a divorce but returned to Assumption after receiving one of Father Duggan’s “welcome back” letters.

As far as dogma and doctrine are concerned, the Pope has little if any wriggle-room. Pope John XXIII was seen as a contrast to the somewhat austere Pius XII, and there is in fact less of a contrast between Francis and his predecessor - in fact both share the avuncular, if somewhat restrained, warmth. Benedict the scholar actually seemed at ease with young people, and they with him. Also don't forget that in 1958 the Church's stance on women priests, abortion and homosexuality was not seen as counter-cultural. The Anglican Church would have laughed to scorn the very idea of priestesses, and abortion and homosexual acts were still criminalized in most countries.

Francis's popularity with the Romans (who don't go near a church from one year to the next, unless it is to show foreign visitors around) is entirely due to the fact that they have got an Italian pope again, albeit an expatriate one.

The media adulation will soon dissipate when people wake up to the fact that the Pope is a Catholic, and embodies everything they viscerally hate.

The only real question is whether people will eventually perceive Pope Francis to be preaching a traditional Catholicism, or if they will always see him as an step in the left direction.

The Traditionalists must, like the subway sign says, remain calm and soldier on. If Pope Francis does come to be outed as a closet conservative I expect some will swing from wild denunciation (Anonymously, of course) to fits of jealously that Benedict XVI doesn't get the credit for whatever conservative bomb is thrown by Pope Francis.

I think there will be at least two lessons from Pope Francis' pontificate. The first will be what JN says above: the people who hate the Church and Her children will eventually return to form. Appeasement, not resistance, is futile. The second will be that their can be more than one valid liturgical form.

If I am to be completely Militant, I must also imitate Pope Francis' friendly manner to convert others. I think it will scare the bejeebers out of the secularists and other religions when they discover that he is open to conversation with the goal of their conversion, not his.