THE NEW FASCISM AND DICTATORSHIP OF THE 21ST CENTURY 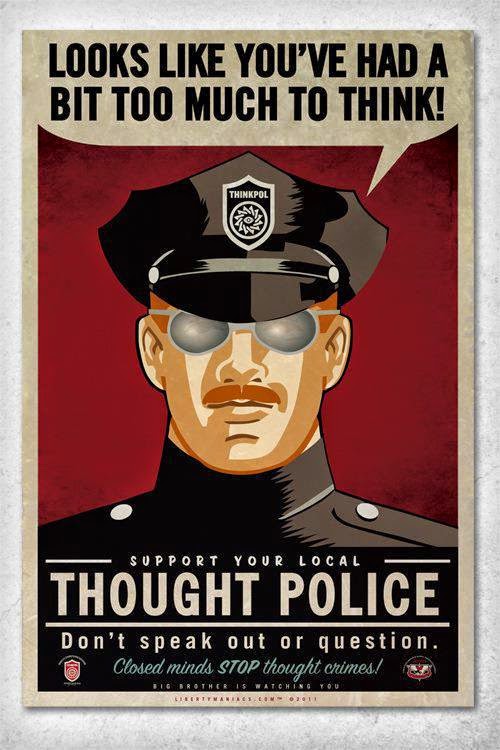 The "thought police" are gaining momentum when it comes to human sexuality, to include abortion on demand and who can marry whom. There is also a movement away from gender identity to gender neutrality. If you disagree with this movement, you will be fired from your job. So don't promote marriage as something that God has designed from the beginning to be between one man and one woman and for a life time. If you do, watch your back, your front and your job!

I wonder who said this?

"There is no possibility of dialogue, there is no possibility to open up to new things which God brings with the prophets. They killed the prophets, these people; they close the door to the promise of God. When this phenomenon of narrow thinking enters human history, how many misfortunes. We all saw in the last century, the dictatorships of narrow thought , which ended up killing a lot of people, but when they believed they were the overlords, no other form of thought was allowed. This is the way they think”.

Father, I think you are obcessing about these issues. We should be talking about the poor..........everyday.

You seem to lack a proper understanding of the Gospel, which requires us to speak the truth "in season and out of season". Pope Francis is leading the way in our time, teaching us to invite our friends and neighbors into Christian truth.

"Anonymous":
I fail to see how Fr. McDonald is obsessing on "these" issues considering the topics on his blog represent a variety of Catholic issues. Liturgical issues may be more often treated, but that is his forte.
Talking about the poor and doing something about poverty are two different things. Catholic organisations are better equipped to deal with material poverty in our world, and individual Catholics are usually very generous in helping them out.
But there is another poverty in our world, that of the Catholic Faith, and that is what Father is talking about here: those who want to strip away that Faith even further, and through such poverty of Faith, populate hell.

I fail to see how Fr. McDonald is obsessing on "these" issues considering the topics on his blog represent a variety of Catholic issues.....

OMG, lighten up for goodness sake. It's called being sarcastic. However your taking umbrage with my statement about "obsessing about the poor" did you have the same thoughts when the pope said we can't obsess about abortion? I think not.

I think Anon was just being sarcastic. Thread hijacking malapropism.

This is vague. From the snippet posted it could just as easily be an attack on those that would bar pro-abortion speakers on Catholic Universities or deny Communion to pro-abortion politicians. Brandon Eich may have been fired for opposing gay marriage, but some Catholic Dioceses are adding "fidelity oaths" to their teacher contracts. Which one is Pope Francis complaining about? Both?

BF, that is entirely appropriate, but you raise the most vital point : are people still allowed freedom of association?

My point is not that fidelity oaths are not needed. I think they are. But if you read Pope Francis with the hermeneutic of "who am I to judge" you can take this snippet to mean that anything goes. I assume that's not what he meant, but he could have been clearer.

When did Pope Francis instruct us not to "obsess about abortion"? I am aware that he said our proclamation of the Gospel should not be obsessed with partial lists of dogmas and morals, but should convey the whole Gospel, starting with Christ's mercy. Someone determined to proclaim the whole Gospel will certainly be concerned to proclaim the dignity of innocent human life. Our pope is 100% behind that.

BF, I have been totally out of the mainstream with that quote. I read an article wherein it was reported he was discussing a theoretical priest who was confessed homosexual attractions yet lived celibately. There is, in my mind, the twin thoughts that such a person, along with other disorders, bears extra consideration, but also a strong admiration of people who fight those deamons everyday with the intent of doing the right thing. I do expect them to stumble with that especially fierce challenge, but why would I not want to support them in their fight. I don't know if it is 'judging' to restrict them from, or to, certain activities, that is my share of their challenge, I just know that i have to do it with some form of charity in mind.

From the above quote, Pope Francis is referring to the U.S. government and private foundations, certain European countries and the U.N. offering aid to underdeveloped countries with the stipulation that they pass laws legalizing abortion, same-sex marriage, gender equality, and contraception