THE POPE ON A ROLL THIS PASSTIONTIDE FRIDAY! THIS TIME, AS HE HAS ALWAYS DONE, IN DEFENSE OF HUMAN LIFE FROM THE MOMENT OF CONCEPTION! 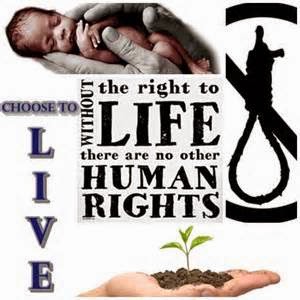 The silly ultra-traditionalist post-Catholics continue to throw stones at Pope Francis for a variety of things and in the most calumnious of ways, which are lies that are of Satan.

Today, has he has done in the past and most forcefully in his Apostolic Exhortation, Pope Francis reiterated the teachings and dogma of the Church concerning the unborn child and her right to life!

Let there be no doubt about the Catholicity of this pope, but I am afraid that I doubt the true catholicity of those who consider themselves defenders of the faith who nonetheless in the most strident protestant way show him and his office contempt!

(Vatican Radio) Pope Francis on Friday reiterated human life is sacred and inviolable during a meeting with Italy’s Pro-Life Movement (Movimento per la Vita), adding every civil right is based on the “first and most fundamental right,” the right to life: which is not subordinate to any condition, neither qualitative, nor economic, much less ideological.

The Holy Father said one of the most serious risks of the present age is the divorce between economics and morality, so that as the market gives us every technical innovation, it neglects more and more elementary ethical standards.

“It is must be therefore reiterated the strongest opposition to any direct attack on life, especially innocent and defenseless life, and the unborn child in the womb is the most concrete example of innocence,” said Pope Francis. “Let us remember the words of the Second Vatican Council: From the moment of its conception, life must be guarded with the greatest care while abortion and infanticide are unspeakable crimes.” ( Gaudium et Spes, 51).

Pope Francis said for a Christian, it is a part of the witness of the Gospel to protect life with courage and love in all its stages.

“I encourage you to always act with a style of nearness, of closeness: that every woman feels regarded as a person who is heard, accepted, and accompanied,” he said.

Pope Francis also showed gratitude for two specific activities of the Pro-Life Movement: The “Gemma Project”, which works with woman facing crisis pregnancies; and the “One of Us” Campaign, which is a European Union Citizens’ Initiative requesting the prohibition of EU financing of activities which involve the destruction of human embryos, especially in the areas of research, development cooperation and public health.