WHILE CATHOLIC BISHOPS AND ARCHBISHOPS MAKE FISCAL BLUNDERS, THEIR SPENDING IS SMALL POTATOES COMPARED TO WHAT OUR GOVERNMENT ADMINISTRATION WASTES 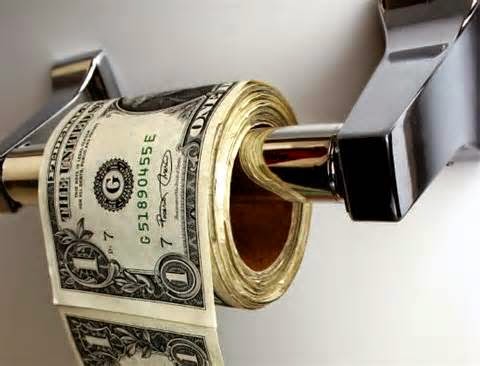 Archbishop Wilton Gregory of Atlanta spends $2.2 million on a lovely southern mansion. The bling bishop in Germany spends about $45 million on his residence and pastoral center with some extravagant non-essential elements thrown in.

About 25 miles outside of Augusta, Georgia, my hometown, there is what we natives call the "bomb plant." It was built during the heyday of the cold war, in the 1950's to help produce this nation's atomic bombs, nuclear weapons. It produced a key component for these weapons, a very highly, radioactive element called plutonium weaponized into tritium.

Up until the end of the cold war toward the mid 1990's about 30,000 people were employed there with high paying jobs. After the cold war production of tritium ended and turned to clean up and other more peaceful missions. I think the work force is about 15,000 now.

One of their primary missions of recent times is to deal with all the left over, highly radioactive, quite dangerous plutonium. The government to date has spent $3.9 BILLION on this project. You read that right, $3.9 BILLION!

NOW THE OBAMA ADMINISTRATION IS SCRAPPING THE BUILDING OF THE FACILITY AND ITS ENSUING MISSION AFTER HAVING SPENT OR SHALL I SAY WASTED $3.9 BILLION!

Here is the Augusta Chronicle's news story on this:

In recent years, the Obama administration has slowed funding for the MOX project that has cost taxpayers $3.9 billion on so far, according to the NNSA. Cost estimates for the program’s life cycle had risen to $30 billion.
The administration said in its fiscal 2015 budget proposal released Tuesday that a yearlong review of the MOX program signaled a need for quicker, more cost-effective methods to dispose of surplus Russian and U.S. weapons-grade plutonium.

“A review of this approach has determined that the MOX fuel approach is significantly more expensive than planned and it is not viable within the (fiscal year)2015 funding levels,” according to the budget proposal summary. “The Department of Energy is developing alternative approaches to plutonium disposition and will engage with stakeholders to determine a viable alternative. As a result, the MOX project will be placed in cold standby while an alternative approach is determined.”
The MOX plant – which is about 60 percent complete with a current workforce of about 1,800 – would be the first of its kind in the U.S. to create commercial nuclear fuel from weapons-grade plutonium and represents an international nonproliferation effort.

Last year, the Government Accountability Office said that the project was more than three years behind its 2016 completion deadline and that construction costs were revised from $4.9 billion to $7.7 billion.

Resuming the program after a cold standby would require a significant cost reduction, the NNSA said Tuesday in a media briefing. Other options for plutonium disposition will be analyzed in the coming 12 to 18 months.

“What we mean by (cold standby) is that we would perform activities associated with protecting the facility and equipment from elements and ensuring they are maintained,” said Anne Harrington, the deputy administrator for Defense Nuclear Nonproliferation.

“We will protect the investment should the project be restarted or used for something different,” Harrington said.

U.S. Energy Secretary Ernest Moniz said Tuesday that the administration was committed to the 2000 U.S.-Russia agreement to dispose of 68 metric tons of surplus plutonium but that MOX costs had spiraled out of control.

“We have a task force that’s been working at this very hard for the past nine months. They are continuing to work with contractors to see if we can get a substantial cost reduction,” Moniz said.

Of the $1.6 billion proposed for the NNSA’s nonproliferation efforts in the president’s budget, $221 million was allotted to shutter the MOX facility. Cuts to MOX represented more than half of nonproliferation’s 20 percent funding reduction, Moniz said.

Tom Clements, a critic of the MOX project and an adviser for the South Carolina chapter of the Sierra Club, said the proposal was overdue.

“We have long called on DOE to abandon the mismanaged MOX project and implement viable disposition alternatives, and this request finally gets DOE on the right track,” Clements said.
Some South Carolina lawmakers who have long backed the MOX project blasted the Obama administration for cutting its funding.

“(The president’s) decision to dramatically reduce funding for the MOX program, to a point that raises serious questions about its viability, represents a fundamental breach of trust with the residents of South Carolina,” said U.S. Sen. Lindsey Graham, a Republican.

MY FINAL COMMENT: But there is more. This is what the Augusta Chronicle is reporting this morning:

The contractor building the mixed-oxide fuel fabrication facility at Savannah River Site said work continues as normal despite the National Nuclear Security Administration announcing four weeks ago it would begin shutting down the plant.

So, you're saying the Church sucks less than the government…comforting...

I for one don't care where a bishop chooses to live. But I care very much that they teach the Faith clearly and in totality and without compromise.

Instead of making cheap public gestures for a camera I would suggest that all bishops conduct themselves as successors of the apostles and stop selling the Faith down the river by compromising with the world and all its many, many false ecclesial communities.

A pope choosing to live in a motel instead of the traditional papal residence doesn't help a homeless person.

A pope choosing to dress sloppily doesn't clothe the naked.

A bishop living in a mansion takes away nothing from anyone.

BUT a pope/bishop who does not teach clearly or compromises the Faith puts the souls of millions at risk.

BUT a priest, bishop, pope, nun, brother who doesn't live a life that they freely choose to live and teaches heresy and disobedience to the Church can be the cause of millions of the faithful to be lost.

Yeah, Gene, my thought exactly!
Not even an apples-and-oranges comparison, Father.
Not the same entities at all. You are scrambling here...

The money wasted on the wars in Iraq, Afghanistan, and Pakistan is between $3.2 and $4.0 Trillion dollars.

If you're interested in highlighting government waste, start there.

Bringing up a bad example will often persuade few but justify many.

"See what they did, what we did is not so bad."

Anonymous, Not to mention the billions wasted in entitlement programs and government giveaways to the totally unproductive and downright destructive elements of society, or the billions sent overseas to third world countries that hate us.

Gene - So you'll undoubtedly reject 100% Social Security and Medicare? You can care for yourself financially, so spending from those programs on you would be wasteful...

Anonymous, SS and Medicare are programs that those of us who work hard all our lives pay into through various exorbitant taxes. It is our damn money! There is a huge difference.

Medicare is most certainly one of the "entitlement programs" you so glibly condemn.

From the Heritage Foundation: "Entitlements—Social Security, Medicare, and Medicaid—threaten to bankrupt America. Exploding entitlement spending is crowding out other budget priorities and threatening to shackle current and future generations."

From Stephen Foster, Addicting Info: " Social Security IS indeed, an entitlement. The same is true for Medicare. Created in 1965, Medicare is a government insurance program that covers up to 80% of health care expenses for those who are 65 and older and those with disabilities and debilitating disease and illness."

From David Nather and Healthcare Finance News "Medicare: An Entitlement Out of Control"

Anonymous, I don't need the damned entitlements. But, we pay for them with our exorbitant taxes. The working people of the country, now almost a minority, foot the bill for the wastoids and human refuse that it has become the government's primary job to promote and shove down our throats. I would not give a damn if they did away with all the entitlements so the "poor" in this country could see what real poverty is. No mo' welfare queens, entitlement cadillacs, and wide screen TV's in the crack house.

According to the non-partisan Congressional Budget Office, for people in the bottom fifth of the earnings distribution, the ratio of benefits to taxes is almost three times as high as it is for those in the top fifth.
The benefits to tax ratio of the top fifth in income is around 60%to70%. For the bottom fifth it is close to 200%. A lower paid worker receives a much higher percentage of his or salary in benefit payments than higher paid workers. A married low salaried worker can receive over 100% of their salary in benefits after retiring at the full retirement age. Employees of county and municipalities that opted out of Social Security have by and large higher retirement incomes than had they stayed with Social Security.
One more interesting projection that may be pushing the illegal immigration issue: by 2030, there will be only two workers for every retiree.

And before you, a white man, suggest that welfare is a Black problem, look at the statistics.

It's very convenient for you, who don't need assistance, to look forward to the suffering of those who do.

Welfare in itself is a problem The welfare state is nothing to be desired…it destroys economies and robs people of the incentive to better themselves. Certainly, there are those who are indeed poor and need State assistance, but our system is bloated with users and ne'er do wells. Job creation…free enterprise capitalism…a rising tide floats all boats...